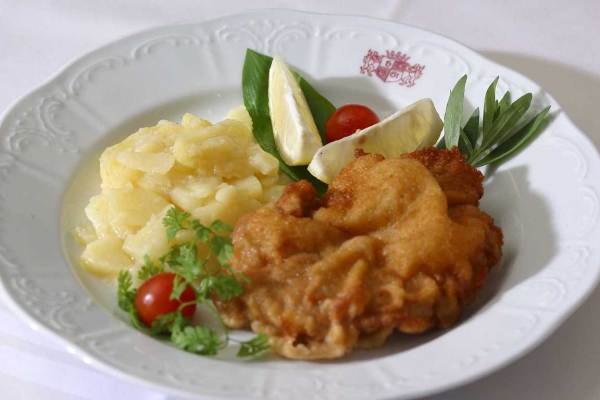 For vacationers and tourists it belongs to the perfect vacation in Vienna, and Herr and Frau Austria have voted it their favorite Austrian dish: Wiener schnitzel. And let’s face it: Isn’t it a genuine pleasure to dine on a freshly fried, golden brown Wiener schnitzel, replete with tasty potato salad?

As is the case with many Viennese dishes, there are all sorts of conjectures as to how it came about. The most probable is the theory that Wiener schnitzel is from Italy, where it was popular as the “Milanese cutlet.” Yet how did the Italians arrive at this glorious recipe?

In the late Middle Ages, the Italians looked upon their neighbors in Byzantium (the later Constantinople, now Istanbul) with envy. There, they arrived at the idea of coating meat with gold leaves in order to flaunt their wealth. The Italians took up this fad, yet of necessity were limited by the widespread famines of the time – and the gold coating became a shell of golden brown fried white breadcrumbs.

It tastes even better with a view over Vienna 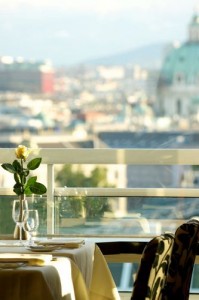 It tastes even better with a panoramic view over Vienna

In 1848, field marshal Radetzky raved about the “golden” delicacy in a military report at the court. Interestingly, before the breaded schnitzel could really gain a foothold in Vienna, it became popular at peasant weddings in the Weinviertel wine region as “golden schnitzel.” Yet in the ensuing years the Viennese cooks continued to occupy themselves thoroughly with the Italian recipe and refined it: In place of the cutlet, the more succulent veal was thinly sliced, the white breadcrumbs were replaced by Austrian breadcrumbs, and the flour that was much-loved in Viennese cuisine was added as the basis for the highly sticky coating.

The Viennese transformation succeeded—today, Wiener schnitzel is the epitome of classic Viennese cuisine. It’s unimaginable for either upscale or Viennese tavern cuisine to do without it.

You can find a tasty recipe for Wiener schnitzel at the recipe pages of the Schick Hotels in Vienna, where we’ll regularly give you insight into our chef’s pot. What do you enjoy eating most with Wiener schnitzel? Only salad or parsley potatoes or rice? I look forward to receiving your feedback.

Next up in “Recipes with History” – we’ll stick with breaded dishes: fried chicken & Co.