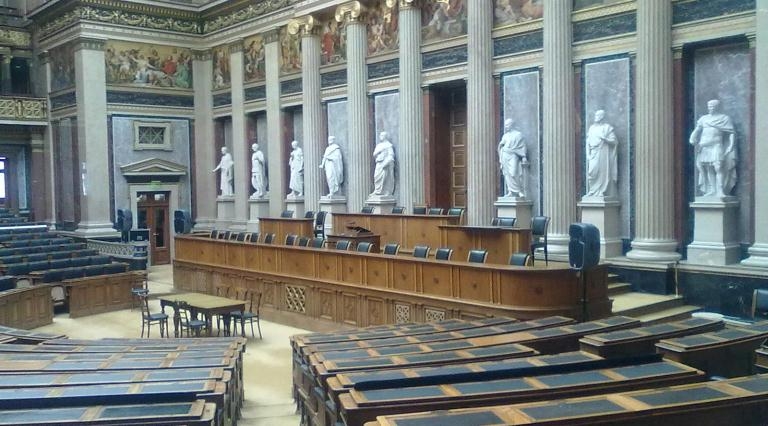 Children in the National Assembly Hall discuss whether homework should be done away with. Afterwards, there is an “official” vote—those who stand up are in favor of the motion—just like the adults do. While counting, the “interim” National Assembly President briefly loses track of things. Does that also sometimes

We’re looking for two of the destroyed and subsequently restored marble columns in the portico. We learn how many meters of red carpet were laid in the Parliament building. We marvel at the historic chamber and hear that the first representatives used to spatter each other with ink to disrupt speeches.  ….. the children shake their heads and exclaim, “….. how childish is that?!”

Afterwards follows the discussion in the National Assembly Hall. Incidentally, I was thoroughly surprised by the result.

After an hour and a half that flew by, we learned a lot and felt very important, since everything begins with ourvoice and our vote. Yet… that much was clear to the children from the very beginning!

360° panoramic tour of the Parliament building

In the basement of the Parliament building there is a modern, freely accessible visitor center (Monday through Friday from 8:30 AM to 6:30 PM, Saturday from 9:30 AM to 4:30 PM). Here, you can test your knowledge or get to know Parliament interactively.

Details on family tours of the Parliament building