You may eat your fill of sweets in the capital city of desserts! One of the peculiarities of Vienna is that desserts are still served as main dishes. On the one hand, this tradition stems from the time in which fasting was still taken very seriously and from the fact that meat was taboo; hence people in Vienna were dependent on sweets to fill them up. On the other hand, the cuisine styles from all countries within the monarchy merged in Vienna, which also brought numerous sweet delicacies to the court and into the imperial city. Let’s talk about typical warm Viennese desserts, winter warmers for the body and soul.

The word “Schmarren” has been in use since the 16th century. In Viennese dialect, it describes something inferior or nonsensical. Some dialect researchers think that the word “Schmarren” is connected to “Schmarotzer” (freeloaders), who settled wherever there was good Schmarren available to eat. Purely in terms of preparation, Schmarren is a warm dessert made of semolina, crescents (biscuits), rolls, potatoes or flour and eggs. Basically, Schmarren was a heavy farmer’s dish and is first found in the “Hochzeitspredigt” (wedding homily) by Johannes Mathesius in 1563. Etymologically, the word “Schmarren” may be traced back to “Schmer” – lard or fat – which explains why it’s so heavy. 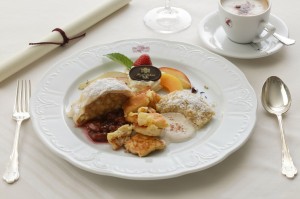 Viennese desserts at "A Taste of Imperial Vienna"

Socially acceptable, crisp on the outside and fluffy on the inside, Schmarren was first in the middle-class households of the 18th and 19th centuries. Cream was used instead of milk, the number of eggs was increased, and sugar was in part replaced by vanilla, orange zests or cinnamon. Around 1850, this variant was first termed “Kaiserschmarren.” The legends surrounding this naming are manifold; however, several versions exist that hearken back to Emperor Franz Joseph I or the imperial family. Especially entertaining is the story in which the head chef’s dough turned out to be too thick and torn while he was preparing “Palatschinken” (pancakes). When he attempted to present this to Empress Elisabeth, who did not appear to be particularly pleased, the emperor rescued the situation with the words, “Well, just give me the Schmarren that our Leopold concocted yet again!”

Another variant tells of an imperial hunt that ended with an Alpine dairyman (also called “Kaser” in Austria) who presented the emperor with a “Kaserschmarren” for fortification. The emperor was so thrilled that he renamed the dish.

Some things speak in favor of Kaiserschmarren having originated in the southern Alps region, where it was called “Casa-Schmarren” – “house Schmarren.” Stewed plums as a typical side already came in the 19th century. Since then, neither this side nor the method of preparation has changed.

Apple strudel – a child of occupation

The most Viennese of all desserts, (apple) strudel, which is prepared in many variants and with many fillings, was a souvenir from the Arabs, who pressed onward towards Spain via North Africa in the 8th century. Strudel dough was still mentioned as a Spanish dough in old cookbooks. However, the Spanish Moors did not roll the dough, but rather laid it in layers, alternating with the filling, similar to Turkish baklava. When the triumphal procession of the Arabs ceased in France, strudel dough also got stuck there. It probably would have made its way from France to Austria as “pastis” or “croustade,” had the Turks not been faster. At the beginning of the 16th century, they marched over the Balkans to Hungary and Vienna (1529). Flavorsome strudels, filled with jellies and rose syrup, were already prepared in the field kitchens. After the Turks withdrew, the strudel was preserved, with other fillings typical of the localities. In Hungary, where particularly glutinous flour was available, very smooth dough was the result. Strudel thus entered the empire from what was then West Hungary (nowadays Burgenland) and reached primarily Vienna and Lower Austria, where the largest variety of fillings is still found today.

During the imperial era, it was said that a strudel tasted better if it was baked by a cook who also happened to be a lady in love. An enamored and scrupulous strudel baker stretched the dough so thin that she could read her love letters through it. Many airy layers of dough were thereby guaranteed. The strudel doughs that can be purchased today are a genuine relief, yet they can’t compete with homemade dough. Filling the dough with fruits and all sorts of other delicacies is still a brilliant idea. Juicy on the inside and crispy on the outside – this results in an inimitable taste and mouth feel.

Speaking of strudel, “Millirahmstrudel” is said to have been invented in the restaurant Zum Roten Stadl in Breitenfurt, in the Vienna Woods, in the 19th century, as this restaurant was particularly famous for its strudel. A cook named Milli created the recipe from rolls, milk, butter, eggs, vanilla, sugar, cream and raisins. Back then, it was already served with vanilla sauce or “Kanarimilch” (Austrian dialect: “canary milk,” a type of vanilla sauce). That a “Mülch Raimb Strudl” is already mentioned in the Viennese cookbook “Gantz Neu vermehrter Sorgfältiger Hauß-Halter” in 1696 hardly detracts from the sympathy for Milli. 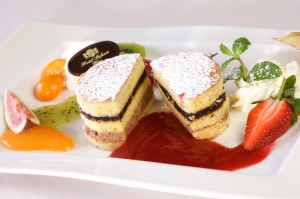 “Palatschinken” – an heirloom of several countries in the monarchy

“Palacsinta” in Hungarian, “palačinka” in Czech – that’s where the richest variants of our “Palatschinken” (pancakes) come from. If we trace them further we arrive in Romania, the home of “placinta.” This name is derived from the Latin “placenta,” the afterbirth. Do pancakes also come from the Romans? Far from it, they originated from one of humanity’s oldest dishes – flat cakes baked on hot stones, the original form of bread. Yeast dough was baked in this manner in Transylvania, and this method of preparation migrated through Slovenia to Bohemia and was integrated into Viennese cuisine in the 18th or 19th century.

The spelling “Palatschinke” only became established in the 19th century; old cookbooks refer to “Pfannkuchen” (lit. pancakes), “Eierkuchen” (“egg cakes”), “Omeletten” (omelets) or “Dalken” (another term for pancakes). Today we differentiate very strictly: The “Palatschinke” is prepared from thin batter, while “Pfannkuchen” (ascribed more to Germany) consists of thick dough. The “Omelette” (in Vienna the omelet) is a refinement of both and was very popular, especially in the 18th century. There are plenty of fillings for “Palatschinken” in Vienna, be they classic with marmalade, rich with nut filling, airy with curd cheese (“Topfen”), refreshing with ice cream and fruit, or even spicy with meat, fish or vegetables.

Worldwide, flat cakes exist in many different forms, each only slightly modified: tortillas in Mexico, chapatti in India, crêpes in France, crespelle in Italy, dorati in Switzerland – “Palatschinken” are true global citizens.

Is your mouth watering yet? Care to try one or another delicacy again, or maybe even bake it yourself? Three special Viennese desserts can be tried at “A Taste of Imperial Vienna” – a culinary journey through the former Crown Lands of the Austrian Monarchy, offered at Restaurant Kronprinz Rudolph / Hotel Stefanie: Kaiserschmarren, apple strudel and Powidltascherl including a Viennese melange and garnished with insights onto the history of Viennese cuisine! An absolutely recommended experience!

Enjoy with the special warm Viennese desserts also a special Viennesse coffee. How about an “Einspänner” (mocha coffee in a tall glass, topped with a dollop of whipped cream and powdered sugar), for instance, or a “Franziskaner” (mélange topped with whipped cream instead of frothed milk)? For coffee specialists, there are also the “Kaisermelange” (beaten egg yolks with sugar and cognac in black coffee, served with a bit of milk) and the “Obermayer” (double mocha coffee onto which very cold liquid cream is drizzled using an upside-down coffee spoon) – or perhaps you’d prefer an “Überstürzter Neumann,” in which whipped cream is put into an empty coffee cup and then “rushed” (“überstürzt”) with a double mocha? For cool people, the “Mazagran” is the right coffee – a double mocha, cooled with ice cubes, served in a glass with a maraschino cherry. Ask for one of these Viennese coffee specialties during your next visit to a café in Vienna!

Meanwhile, the sweet land of milk of honey that is Viennese dessert cuisine contains many delicacies and unique specialties that need to be preserved and passed on to future generations – so that “Kaiserschmarren,” apple strudel & co. continue to seduce the next centuries to pleasurable moments.