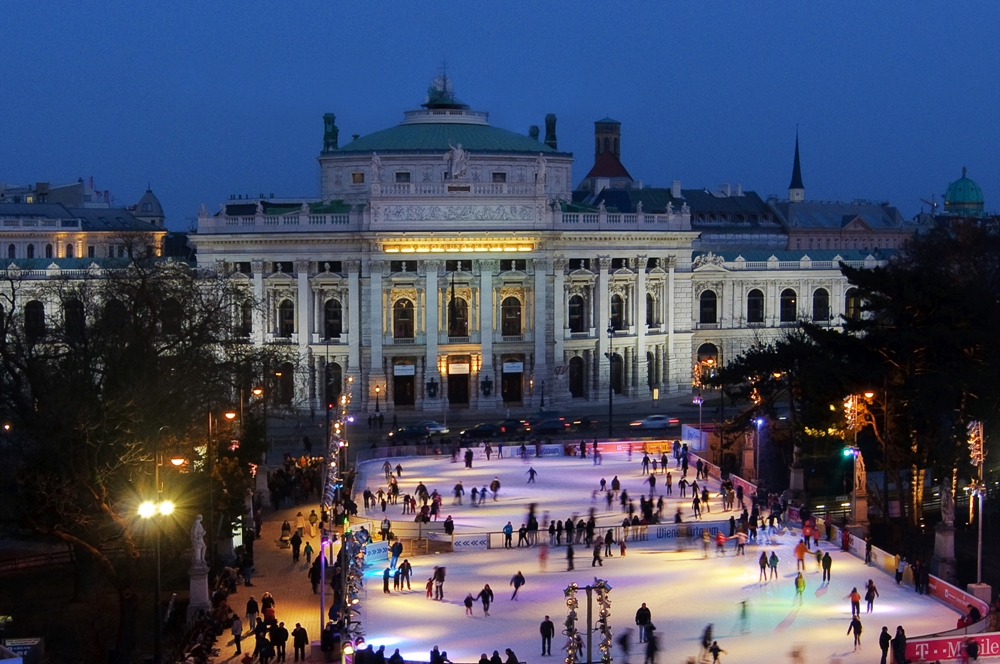 Work is going full speed ahead, the onset of winter created the right surroundings, and now nothing stands in the way of the opening of Vienna Ice Dream on January 24, 2013.

Last year, I already warmly recommended the Vienna Ice Dream to you in one of my articles and cannot but do the same in 2013 as well. On a total of 7000 square meters of ice surface, you’ll also find many labyrinthine paths through the City Hall Park in addition to both of the large ice rinks. Starting on Thursday, a free-of-charge practice rink for beginners with ice skate penguins, ice skates on loan, an opportunity for Bavarian curling and much more await visitors once again.

Yes—the athletic Viennese among us have already been doing laps at the Vienna Ice Skating Association (Wiener Eislaufverein) since late autumn. With its 6000 square meters of ice surface—among the world’s largest—this organization celebrated its 100th anniversary in 2012. The founding of the association hearkens back to the year 1867, in fact. A time-tested ice rink against a tourist magnet (in front of a spectacular backdrop between the Burgtheater and City Hall Square)? …. Or a round at Lake Neusiedl nonetheless? There’s something for everyone—the choice is yours!

The possibility of moving quickly on ice was used already by the first humans. It is assumed that bones were used for the initial attempts to glide over ice. Among the aboriginal peoples of Siberia can be found walrus teeth, and in China bamboo shoots.

A bone ground on its sides, which was found in France and estimated to be 20,000 years old. Discoveries of flatly ground, perforated bones fastened to sandals from 3000 BCE can be identified, to a high degree of certainty, as ice skates. In Central Europe until into the 19th century, the bones of pigs’ feet, fastened to the feet with leather straps, were primarily used as aids for sliding along ice. The pigs’ bones used for this purpose were described as “pork knuckles.”

Ice skating as a sport has its starting point in the Netherlands, where about 800 years ago “postal carriers” with iron runners (blades) on wooden shoes ran over the frozen canals in order to deliver messages. Over the years, ice skating went from a pleasurable pastime for the nobility to a popular sport.

Initially, wooden sticks were always used for moving forward. In Canada and Denmark, people experimented with fastening a sail on their backs. The team sport of ice hockey arose between 1840 and 1875. (Wikipedia)

I wish you lots of fun on the ice!