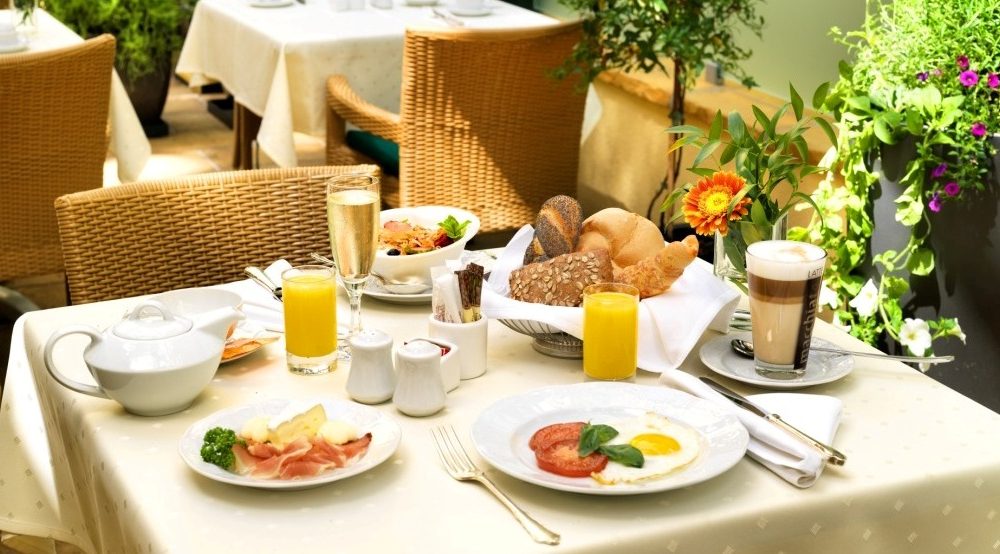 A tasteful start to your day…

The word “breakfast” calls to mind the following image: Late on a Sunday morning, the aroma of coffee in the air, fruit juice, fresh rolls, butter, homemade marmalade, a hard-boiled egg, some ham and cheese, a newspaper and lots and lots of time…. Unfortunately this vision is limited to Sunday, since the whole thing is usually more tense on weekdays and serves only to fulfill the basic function – healthy and energy-rich food intake for a day at work or school.

A brief history of the term “Frühstück” (breakfast)

The word “Frühstück” hearkens back to the piece of bread eaten in the early morning in the 15th century. The new word displaced the word “morgenbröt” from Middle High German that was common up to that point in time. This also pertains to the Swedish word “frukost” or the Danish “morgenmad.” The German word is quite contrary to the English word “breakfast” – which described the first food intake of a new day in the sense of “breaking a fast” after the night. This is also the case for the Spanish word “desayuno.” In France, it’s a bit more precise – the “little breaking of a fast”: “petit déjeuner” (pétit = small, jeuner = to fast) describes breakfast, while “déjeuner” means a small lunch.

Other countries – other customs

While breakfast as the first meal in the morning is pervades all cultures, its configuration, composition, time, duration and accompanying rituals are entirely different from one cultural area to the next. While in our parts, baked goods and bread, butter, bread spreads, cheese, sausage and ham, marmalades, honey, various mueslis, yogurt, fruit, as well as hard-boiled, scrambled or sunny side-up eggs and bacon, accompanied by coffee, tea, milk, juice and cocoa, are eaten in the early morning between 7:00 and 11:00, in African and Asian cultures there are no sweet breakfast foods at all. In Uganda, for instance, people like to eat beans with rice, cornmeal mush, porridge, fried or boiled sweet potatoes or cassava (tapioca) slices, and heavily sweetened black tea or tea with milk is drunk with these foods. In Ugana, people only start eating breakfast around 10:00. The tradition Japanese breakfast consists of rice, tsukemono (pickled vegetables), fried fish, miso soup and nori algae, accompanied by Japanese green tea. In recent years, Western-style breakfast has enjoyed increasing popularity in private households in Japan, especially among the younger generation. Also in the country’s international hotels, people can generally choose between a Western breakfast buffet and a traditional Japanese breakfast.

In Russia, people fortify themselves in the morning with milk pudding, boiled or sunny side-up eggs, bread with butter and cheese, together with coffee, tea or cocoa, while in the USA people like to eat toast or pancakes, bacon, hash browns (similar to “Rösti” in Austria) and scrambled eggs, and occasionally breakfast cereals, accompanied by coffee and orange juice. Still unsurpassed is the British/English breakfast in all its variety, with baked beans, breakfast bacon, “bangers” (small sausages), scrambled or sunny side-up eggs, hash browns, black pudding (blood sausage), toast, marmalade, porridge, ham and eggs, and often sweet pastries and potato bread, accompanied by tea or coffee.

Breakfast or brunch in Vienna

Due to the “Viennese coffeehouse” establishment, a breakfast in Vienna is something quite special. Whether your breakfast is classic in one of the traditional cafes, exotic in a hotspot, or surrounded by culture in various museums, everything comes down to your individual preferences. From the traditional Viennese breakfast to dim sum in a bamboo basket or an opulent champagne breakfast, all the way to a copious brunch (which in Vienna amounts to more of a lunch buffet than a breakfast buffet), the possibilities are simply unlimited – no one gets a raw deal.

When I don’t eat breakfast at home, here are
my current personal breakfast top spots in Vienna
:

Café Rochus in Vienna’s 3rd District:
Here, it’s best to order a basic breakfast box and additionally choose from a comprehensive selection of further dishes, as well as your choice of coffee. The “Rochus” is considered a hot spot, where you sometimes bump into a celebrity and yet everybody just leaves everyone as they please. You should make a reservation in any case, especially on the weekend. In the summer, the lovely terrace invites you to chill – and you can eat breakfast here starting at 8:00, and during opening hours, pretty much round the clock.

Kunsthistorisches Museum (Museum of Art History) / Sunday brunch:
This is optimal whenever you want to take in art and culture after an extended breakfast. Especially with children who are halfway interested in art, this amounts to a complete agenda for a Sunday. The range of foods on offer is multifaceted and corresponds more to an afternoon buffet customary in Vienna. It’s not exactly cheap, but it’s in amazing surroundings and includes the museum visit. Sundays from 11:00 AM to 2:30 PM.

Hotel Stefanie / Sunday brunch – in Vienna’s 2nd District:
Anyone wanting to enjoy Viennese cuisine in a historic ambiance shouldn’t miss out on the Sunday brunch. Tradition is writ large at Vienna’s oldest hotel, and this is also reflected in the Hotel Stefanie’s brunch and its respective dishes. Atmospheric piano music accompanies the culinary seasonal delicacies at the buffet. Ideal for larger family meetings whenever you want to spare yourself cooking at home. Every Sunday from October through May, from 12:00 to 3:00 PM.

Point of Sale in Vienna’s 4th District:
Located in one of the most active districts on the Vienna scene, the Freihausviertel. The customers are colorful, the ambiance uncomplicated. At breakfast you’re spoiled for choice – there are numerous combinations ranging from vegetarian or vegan varieties such as Zen Breakfast or Chill-out Breakfast, to Indian or Mexican Breakfast, all the way to an Orient or Relax Breakfast. Each of the combinations can be supplemented by additional dishes, and all of this at truly affordable prices. You can eat breakfast until 3:00 PM on weekdays; on Saturdays and Sundays breakfast is served exclusively, albeit until 5:00 PM.

There’s truly nothing standing in the way of a tasteful start to your day in Vienna, in the truest sense of the word…