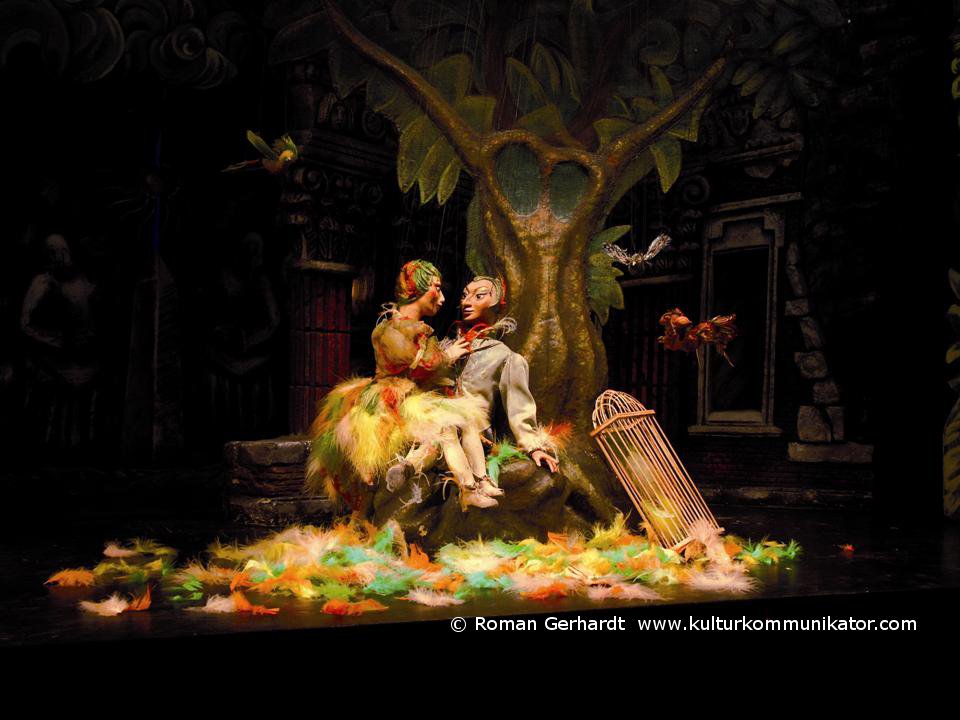 A different kind of Mozart – at the Marionettentheater Schönbrunn

Do you like Wolfgang Amadeus’s Magic Flute AND have something left for puppet theater? These two things really can be combined – in the form of a marionette theater in Schönbrunn Palace.

The art of puppeteering deserves respect. A puppeteer requires about three years of practice to perform a puppet show professionally and to learn to manipulate the strings – 17 to 28 of them, and sometimes more – correctly. It requires fully half a year of practice just to make the puppet walk properly, since its legs should neither drag across the floor nor float above it.

Puppeteers stand on bridges behind the stage, and the strings are approximately three meters long. They don’t “play” the puppets; rather, they “are” the puppets, and you can imagine the contortions they sometimes have to perform to make sure the strings don’t get all tied up.

The Magic Flute in the Marionettentheater

The program includes operas, musicals and fairy tales.
Mozart’s Magic Flute is performed most frequently. The program lasts two hours, and the music is prerecorded. Of course, this can’t compete with an opera performed live. On the other hand, this isn’t a performance of Kasperle (the most famous puppet in the German-speaking world), and in my opinion it’s only really suitable for experienced theater-going children of around 10 years of age and up.

As a children-friendly performance (suitable for 3 years of age and up), I recommend The Magic Flute for children (Kinder-Zauberflöte) or Strauss’s The Bat for children (Kinder-Fledermaus). It doesn’t last very long, there’s more speaking, it’s thereby more entertaining and parents accompanying their children will also enjoy it. In addition, family musicals and fairy tales are on the program.
One very nice thing is the possibility of booking a child’s birthday there, in which the children are permitted to get a precise view behind the scenes, and how the puppets work is explained in detail.

The history of the Marionettentheater Schönbrunn hearkens back to the year 1777, in which a theater was built especially for puppet shows, prompted by the visit of the Elector-Archbishop of Treves (Trier) to Empress Maria Theresa. The tradition was revived after the renovation of Schönbrunn Palace’s Hofratstrakt (Privy Council Wing) and in 1994, the privately led theater could be inaugurated. Puppets, costumes and stage design are all manufactured in the in-house workshop. The Marionettentheater Schönbrunn enjoys a good reputation internationally, is regularly on tour throughout the world from New York to Hong Kong, and has already been awarded several prizes.

The Marionettentheater Schönbrunn – extraordinary – exceptional – something different for a change!