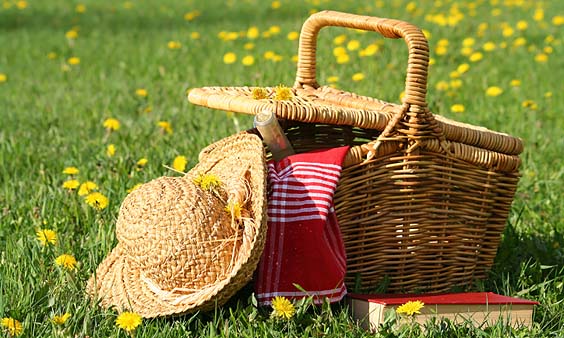 This year, the more than beautiful summer, with its hot temperatures and lukewarm evenings, invites us more than ever to stay outdoors. For me personally, having a picnic in the open air is simply a part of summer. If you live in Vienna, you don’t necessarily have to leave the city – more than half of Vienna’s urban space consists of parks and open space. Viewed statistically, every Viennese thus has 120 square meters of open space. Vienna is thereby among the world’s greenest cities with over one million in population. There’s nothing like going on a picnic!

Eating together in the open air already existed in antiquity with the Greeks and Romans. Just think of the “miraculous multiplication of the loaves” in which Jesus Christ ordered people to settle down on the grass, “and they all ate and were satiated.” In the Middle Ages, travelers were often forced to eat on the go outside of taverns. Formerly, it was customary in agriculture to eat an in-between snack in the field to be reinvigorated for work. In manorial hunting societies, a meal was eaten in the open air. In the Baroque era, eating in the open air was popular amongst the nobility as a summer pleasure, above all in France, where it has its origin at the beginning of the 18th century.

In the picnic country par excellence, namely Great Britain, Oliver Cromwell had a dinner served in Hyde Park as early as 1654, and even Queen Victoria frequently liked to eat outdoors. The classic picnic basket, which contains a tablecloth, dishes and flatware in addition to food, emerged in Great Britain in the 19th century.

Picnics continue to be popular in Great Britain also among the upper class and can have the status of a societal event, such as during horse racing at Ascot or at the Wimbledon tennis tournament.

According to most sources, the word “picnic” is of French origin. It consists of piquer for “to pick” and nique for “trifle.” Yet the Brits also claim the origin of the word for themselves. As evidence, a letter from the English Lord Chesterfield to his son from the year 1748 is cited, in which he describes a get-together as a picnic, although it did not involve eating (source and further info under http://en.wikipedia.org/wiki/Picnic ). 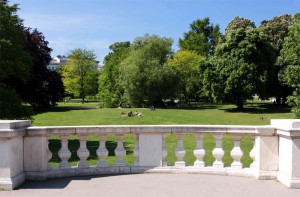 Enough of the past – now let’s make our way into the green city of Vienna, where there are tons of good picnic areas. You just need to open your eyes.

There are all kinds of parks in the middle of the city, such as the Burggarten or the Volksgarten, the Stadtpark, the Augarten or the Steinhofgründe. Their large size ensures a comfortable little spot, despite tourists and people walking past.

If you need more free space but don’t wish to be less central, you should go to one of the many large sunbathing areas in the Vienna Prater. The Jesuitenwiese is particularly good for families. A slide and a playground make sure that the little ones don’t get bored. While parents are resting in the green area, they still have an overview of everything. Playing soccer, badminton or Frisbee, bicycling or running – you can “train off” the food you bring straightaway. (Note: dogs are not allowed at the Jesuitenwiese.)

Those who don’t mind traveling short distances can head off towards one of several different compass points. Whether it’s a tranquil picnic in the Kurpark Oberlaa, an opportunity to cool down in the cool water at the Donauinsel, in the multilayered Donaupark, idyllic in a boat on the Alten Donau (the Kaiserwasser is recommendable for lovers, for instance) or near lots of wildlife in the Lainzer Tiergarten  – you’ll find nice spots for a picnic everywhere. 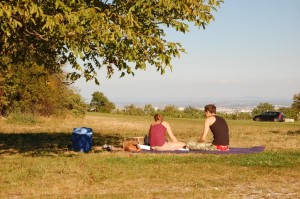 Picnic with panoramic view over Vienna at the "Cobenzl"

In addition to a picnic, you can also enjoy a great view of Vienna at “Am Himmel” and next to the Landgut Cobenzl, where there are also farm animals and more for the little ones to see. After eating, go to the Sisi chapel or the Lebensbaumkreis. The vineyards create a genuine Viennese flair, and wrapping up the day with a visit to a wine tavern makes for a great atmosphere.

Homemade or “rent a picnic basket”?

Once you’ve selected a spot, you’re faced with another choice: to procure or to provide? If you have enough time and are in the mood, you can go confidently into the kitchen and prepare your own salads, biscuits, ham, food, drinks, etc. If you’re picnicking with children, you can have your kids – depending on age – help out. This usually saves complaining and dissatisfaction during the meal. Don’t forget to bring a tablecloth, a bottle opener, a knife, ideally glasses and napkins, and – depending on the food – the right flatware.

If you can’t or don’t want to get your hands dirty, you don’t have to starve: Numerous restaurants and delivery services now also offer complete, filled picnic baskets. At the Villa Aurora on the Wilhelminenberg, for instance, you can have a basket packed with wild boar ham, select cheeses, bread and wine for 50 euros, and the Hermesvilla restaurant in the Lainzer Tiergarten offers various picnic baskets starting at around 20 euros per person (note: you should also factor in a deposit on the basket.)

At La Crêperie along the Obere Alte Donau there is not only – particularly for lovers – a “Moonlight Picnic,” there’s even a boat to go along with it if you’d like (starting at 45 euros for 2 persons).

Various catering and delivery services offer picnic baskets. New to the market and worth mentioning for its innovative idea is the company www.heimschmecker.at, where you can select your desired meal from one of their notable partner restaurants. For a low delivery fee you can have your picnic food delivered at restaurant quality and at restaurant prices, including all picnic utensils such as tablecloth, dishes, flatware, etc., if desired.

There are no excuses left – just choose a spot, pack or order a picnic basket, and set off into nature!

Have lots of fun at your picnic in Vienna!