Exhibitions for the 300th Birthday of Maria Theresa

May 13, 2017 is the 300th birthday of the great regent Maria Theresa. The 63 years of her life, 40 of them performing government affairs, were marked by numerous reforms and innovations, from family and political peaks and valleys, from wars to peace deals. The major special exhibition, which runs until November 29, 2017 and can be seen at four locations in Vienna and Lower Austria, deals insightfully with the person and the ruler. – In addition, an exhibition likewise well worth seeing, featuring Maria Theresa as the Habsburgs’ most powerful woman, is on display in the Prunksaal (State Hall) of the Austrian National Library until June 5, 2017. I can only recommend these as must-see exhibitions; make a note of all the locations and dive into the era of Maria Theresa.

The comprehensive exhibition focuses on the character and life of the regent, on the sovereign’s light and dark sides, arranged into four subject areas and perfectly organized by the Schloß Schönbrunn Kultur- und Betriebsges.m.b.H. (SKB) and the Kunsthistorischen Museum Wien (KHM). The four locations are truly worth seeing: The special exhibition for Maria Theresa’s 300th birthday runs through November 29, 2017 at the palaces Schloss Hof and Schloss Niederweiden in Marchfeld, at the Hofmobiliendepot (Imperial Furniture Collection) Museum in Vienna, and at the Imperial Carriage Museum in Vienna.

Maria Theresa is shown as a thoroughly ambivalent politician. At the beginning of the exhibition is the “Pragmatic Sanction,” which regulated female succession and the indivisibility of the Habsburg territories. Maria Theresa’s ascension to the throne after the sudden death of Emperor Charles VI was nevertheless difficult. The War of the Austrian Succession against Bavaria, Saxony, Prussia and France marked the regency’s initial years. However, the former enemy of France became an ally. In this constellation, the Seven Years’ War, whose magnitude in Europe and the colonies in America and India are shown in this exhibition, began in 1756.

Maria Theresa’s reforms were significantly more sustainable than her military-political successes or defeats. These range from university reform through the military reform and the founding of the Military Academy in Wiener Neustadt, to the introduction of general compulsory schooling together with the educational institutions founded by Maria Theresa (including the Theresianum, the University of Veterinary Medicine, the Montanuniversität in Leoben and the Kunsthochschule [School of Art]). By reforming the state, fiscal system, administration, schools, universities and the military, Maria Theresa took significant steps to modernize her empire. At the same time, as an ultra-Catholic sovereign of the Enlightenment, she sometimes took a skeptical view of her own reforms. 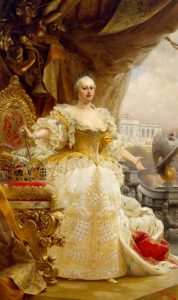 In the first part of this exhibition, visitors will encounter the “Maria Theresa the Widow” and can get a picture of the numerous literary, musical or sculptural monuments. “Image Politics” as the legitimization of sovereignty and “The Family as Political Business” represent further highlights of the exhibition. Maria Theresa gave birth to 16 children, largely thanks to her happy relationship with Francis I, Holy Roman Emperor. Maria Theresa ruled before, during and after her pregnancies with iron self-discipline. The “Mother-in-law of Europe” married off all of her children except for Maria Christina, to political advantage. Another part of the exhibition deals with the renovation, the interior design and the garden design of Schönbrunn Palace.

For Maria Theresa, the rights available to her as a sovereign were self-evident; she defended herself vehemently against any and all attacks. In so doing she crossed some boundaries that her contemporary society had imposed upon women, and did so without fundamentally questioning them. Her enormous acceptancep amongst the general populace also lay in the fact that she lived her femininity openly while evincing markedly “masculine” sovereign virtues.

The young Maria Theresa was famous for her love of frolicsome celebrating and dancing. In addition, she loved horseback riding, which was highly unusual for women of her time. Don’t miss the monarch’s Baroque riding gear, which is displayed publicly for the first time, as well as virtual installation and an opulent procession of artful companions with resplendent horse bells. Significant meaning has always been ascribed to the design of grandiose vehicles. The dynasty thereby effectively presents its impressive strengths during public entrances.

TIP 2:
Plan sufficient time for both Marchfeld palaces, Schloss Hof and Schloss Niederweiden, especially if you’re traveling with children. In addition to the Maria Theresa exhibition, at Schloss Hof there is a beautiful estate (with various gardens (also for tasting different fruits – depending on the season), different animals to look at and pet, playgrounds and more. The beautiful gardens naturally also invite adults to linger and relax.

TIP 3:
Combine the Imperial Carriage Museum Vienna with sightseeing of one of the palaces or a visit to the zoo – depending on the weather.

TIP 4:
At the Imperial Furniture Collection, also linger through the additional exhibition rooms. There are many “treasures” to see, as well as furniture to try out and insight into the film world of “Sissi.”

In addition, I recommend the following special exhibition for the monarch’s important 300th birthday:

through June 5, 2017
in the Prunksaal of the Austrian National Library

She was never elected or crowned Empress – yet she was the “mother of the people” who guaranteed the solidary of peoples, as well as a legend whose effect continues to be felt today. The special exhibition in the National Library shows Maria Theresa as a person in all her different facets. The Prunksaal itself is also worth a visit.

TIP 5 – a highlight that you should definitely note in your calendar:
From April 4 through 23, there is a unique opportunity to marvel closely at the hereditary homage to Maria Theresa, with its precious binder made of silk and gold thread (for conservational reasons, this exhibit is time-limited). The “hereditary homage carriage,” over 1 meter in length, can be viewed for the full duration of the exhibition.

TIP 6:
Anyone wishing to dedicated an entire weekend to Maria Theresa’s 300th birthday can enjoy ideal accommodation in the Schick Hotels in Vienna. Take advantage of the central and easily accessible location of the five charming private hotels and enjoy tradition and Viennese hospitality in its many varieties.