Do you like music, pop music in particular? What about Viennese pop music? Run-of-the-mill music lovers may assume that there’s not all that much, but the “Vienna Calling” exhibition (through March 25, 2018) at Wien Museum, located at Karlsplatz, impressively demonstrates that the opposite is true. Experience six decades of Viennese pop music and the hip locations of the last 60 years.

A History of Pop Music

Vienna is a city of music – that much is clear. Vienna is usually linked to classical music, the world-famous Vienna Philharmonic and the New Year’s Concert, operas, operettas, the Vienna Boys’ Choir, musicals, and of course typical Wienerlieder. Yet few people know that Viennese pop music can already look back on a 60-year history. With its “Vienna Calling” exhibition, Wien Museum has decidedly succeeded in taking up this genre. Enter and visit the “hot spots” of the past decades during your tour of Viennese popular music.

Bars, discos, repurposed buildings (sometimes by squatters), radio stations, clubs and studios await you: from the Strohkoffer meeting place for artists, where Helmut Qualtinger developed his “Halbwilder” (half-wild) character, to the Folkclub Atlantis and the Metropol (still popular in the 1970s as HVZ – Hernalser Vergnügungszentrum / Hernals Recreational Center), as well as the 1980s’ cult discotheque U4, to the Kruder & Dortmeister studio, where the cool Viennese downbeat of the 1990s was invented in a living room atmosphere. The “Flex” is likewise part of the tour, as is the Vienna Popfest at Karlsplatz.

What would all of these locations be without the great musicians and bands? After all, they shaped recent decades with their music and lastingly influenced many of today’s artists. To name but a few: Wolfgang Ambros played “Hofer,” Falco swore by “Brillantin Brutal.” “Anarcho” bands such as Novaks Kapelle and Drahdiwaberl let the sparks fly, Hallucination Company presents astounding musical theater, while the Schmetterlinge protest. Marianne Mendt sings about the “Glock’n,” Georg Danzer’s “Nackerter” is at the Hawelka once more, Supermax starts the “Love Machine,” Helmut Qualtinger has the “Bundesbahn Blues,” Bilderbuch sets the mood with “Schick Schock” and Wanda sings about “Meine beiden Schwestern.”

There’s a lot to hear at more than 40 A/V stations, as well as much to see: Some locations are equipped with “domes,” on whose inner and outer sides are shown unknown archival material and videos of live performances. Studio equipment is reminiscent of the heyday of the internationally celebrated Viennese DJ scene. Flyers, concert photos, album covers, stage outfits, accessories and musical instruments perfectly round out the whole performance.

My conclusion: “Vienna Calling” is highly recommended for all music lovers and fans of Viennese pop culture. Personally, I have already visited this exhibition twice – and will probably “dive down” for a third time, into 60 years of the pop city of Vienna.

Like Falco’s very first hit: “Ganz Wien… im U4 geigen die Goldfisch’…” (“All of Vienna… the goldfish are fiddling away in the U4 disco…”)

HERE is a link to the exhibition. 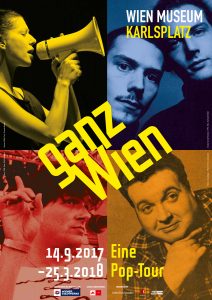 Data and image sources: © Wien Museum am Karlsplatz
Many thanks for your kind support.