A walk outside the city

The world’s oldest zoo, Tiergarten Schönbrunn, is well-known to be a popular destination for Austrians and of course for tourists from near and afar – and not just for the little ones. Nonetheless, an alternative such as the Lainzer Tiergarten can also spark fascination.

First, let’s try to reach this recreation area, which is located on the western edge of Vienna. Take the underground line U4 (which you can comfortably reach on foot from all five Schick Hotels) and head towards Hütteldorf to the station called Hietzing. Then we’ll board the bus line 156B towards Maurer Hauptplatz and exit at the stop called Hermesstrasse. From there we’ll take bus 60B to Lainzer Tor. 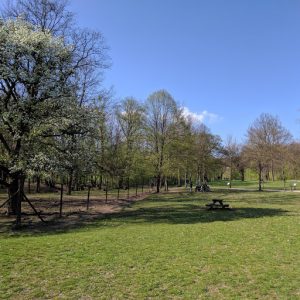 After about a minute on foot, we’ll already reach the gate. With a total surface area of 2,450 hectares, 1,945 of which are allotted to forest area, this nature reserve is not only enormous, it also offers a natural habitat for all kinds of animal species.

Depending on the season, there are different opening hours and different gates open for the zoo. The reception teams in the Schick Hotels would be happy to assist you with any information you may need. The Lainzer Tor, which is the main gate to the zoo, is open year-round, however.

Even if a multitude of bats and bird species have been verified, most of the animals are wild boars, deer, roe deer, fallow deer and mouflons. If you don’t wish to visit the Tierpark Pamhagen or Schönbrunn, this is a good alternative.

There’s something magnificent about going for a walk with your family in this nature reserve, the former imperial hunting grounds, and examining some of the oldest oak and beech trees – just right for relaxing, enjoying untouched nature or just to recuperate.

It’s really something special to receive a villa from one’s spouse. This happened to Empress Elisabeth, who received the Hermesvilla from her husband, Emperor Franz Joseph, in 1886 after five years of construction work. This “palace of dreams,” as the empress called it, was incidentally not named after the Greek messenger of the gods, but rather the guard who looked after the building. Let the original furniture from back then have their effect, and experience another residence where the couple had the privilege of living. What’s interesting is the bedroom with the state bed and the various paintings, where the King of Hungary was able to spend the night.

The admission fee for the Hermesvilla is EUR 7 for adults; admission is free for children and youth up to age 19.

When were you in this part of the Vienna Woods most recently?