Just one step across the Danube

Many colleagues live north of the Danube River and some of them already asked me: “When will you finally publish an article about a topic referring to the area to the north of the Danube River?” With as beautiful as Vienna might be in this area, it is rather difficult to find a topic which would be relevant for Vienna tourists in this part of the city, apart from the Hirschstetten flower gardens. Last year I discovered a small not well-known, but easily accessible recreation area, which I learnt to love and hence, I want to present it to you in this article. 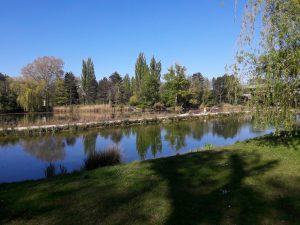 There is nothing better than getting a breath of fresh air after an adventurous city tour, in the green heart of one of the most beautiful parks of Vienna, embedded in an idyllic natural landscape. During beautiful weather you can sit on a bench, observe the diversity of nature and simply enjoy your stay.

In as early as 1905 the responsible representatives in the Vienna Rathaus decided to create a unique green belt around the city of Vienna. It has been retained until today and makes the citizens of Vienna very proud. Even in those days the planning schemes were adapted respectively and are still valid today. Most of the times these areas are identified as protected zones consisting of a green belt complemented by agricultural fields.

The Vienna green belt stretches from Bisamberg, the western Wienerwald “Vienna Woods” , up to the ‘Lainzer Tiergarten’ (wildlife preserves) and from there across Laaerberg up to the Lobau (Vienna floodplain), now subdivided into 24 accessible tours along the so-called ‘Rundumadum’ hiking path. Amongst others the waterpark is also cited, consisting of two ponds connected through numerous conduits and appealing “Spitz” bridges.

The water surface covers more than one-third of the park. As of 1860, after the former main branch of the Danube threatened to become deserted (today the ‘Old Danube’) due to the regulations of that time, the responsible parties decided to create a park in the forest ‘Auwald’ and the surrounding swamps.

They dredged the area and subsequently formed small hills with the excavation materials. Moreover, two big ponds were created which are connected by conduits and several roads were designed which are illuminated by street lamps at night. As an architectonical eye-catcher, small, steep bridges and embankments were created. The park offers also a striking island, which presents itself as a real “water bird paradise”. To the west of the waterpark, Danube water runs via the embankment ‘Hubertusdamm’ up to the ponds and hence in winter provides for ice-free waters.
The waterpark was inaugurated in 1929 as a large project of the Viennese city gardeners.

Around the “water bird island” but also throughout the entire park, one can observe nature. Especially the water birds like mallard ducks, grey herons , seagulls or coots can be observed best with binoculars. Also, the flora offers astonishing views.
There is another attraction in the park which is worth mentioning. It is a type of outdoor fitness studio which was created in the context of an activity park in a small corner of the park. A great idea, which is very much appreciated.

The waterpark Vienna for children 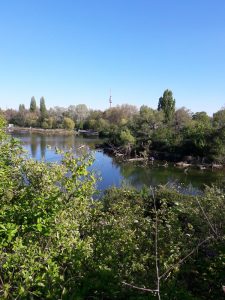 Besides all these natural attractions, there is also a playground for children with different play equipment and large meadows for our youngest visitors to play and have fun.

From all Schick Hotels: Take the subway U4 to Spittelau, there take U6 towards Floridsdorf and get off at “Neue Donau”. Take the exit close to the head of the train into the direction “Am Nordbahndamm”. Follow it straight ahead along a 350-meter-long allotment plant up to the bridge in order to cross the Old Danube. On the left-hand side you will find the waterpark and, on the right-hand side you have a wonderful view on Mühlschüttel.

Stop for refreshment: “Neuer Wirt”. If you sit directly at the waterfront with fair weather, an almost Mediterranean flair arises.