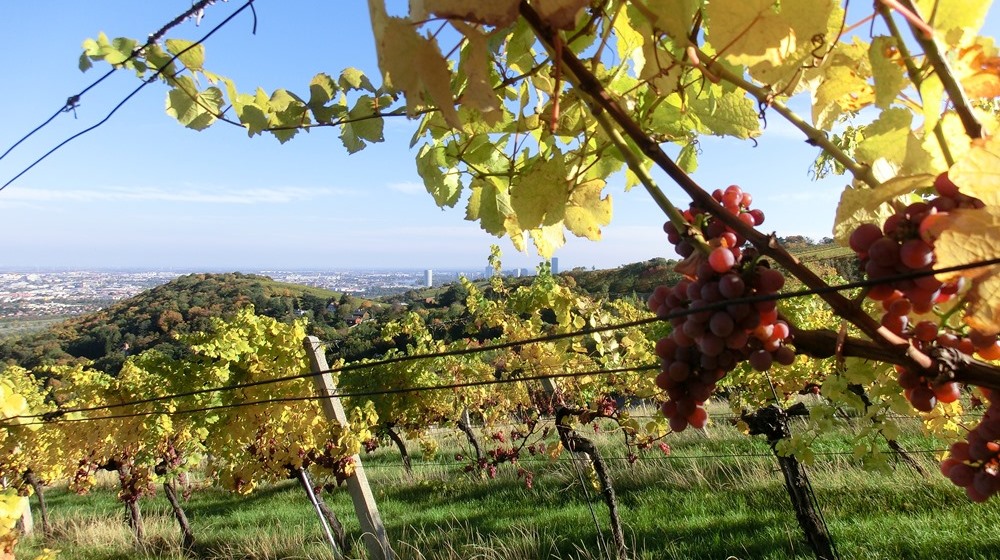 An autumnal hike through Vienna

A beautiful, sunny autumn day is something you should definitely take advantage of to explore the hills surrounding Vienna. Within minutes via public transportation, you can reach one of the starting points of the many hiking trails in the city, and you’ll be rewarded with wonderful views of Vienna and the Danube. Today I’d like to introduce you to a particularly spectacular path, one steeped in history:

The part of the Leopoldsberg hill that slopes steeply towards the Danube is described as the “nose” (“Nase” in German). Formerly, a steep hunting track, this path was developed by Prince de Ligne around 1800. The Nasenweg ends at the Leopoldsberg Church and the Kahlenberg Castle, the history of which hearkens back to the 12th century. In 1679, Emperor Leopold I laid the cornerstone for the chapel – dedicated to St. Leopold – which can be recognized from a distance today. (The area is currently under construction and is therefore inaccessible.)

A steep path up

Start at Kahlenbergerdorf (reachable with the S-Bahn 40 heading towards Klosterneuburg), across from the Kuchelauer-Hafen (harbor). At the beginning of the Nasenweg there is an obelisk, which used to mark the city limit.

Hike along the wine reeds, most of which are cultivated by Klosterneuburg Monastery, on steeply descending slopes. A walk up the 1.5 km long, paved Nasenweg lasts a leisurely hour over 220 hm, 12 turns and 310 steps all the way up to the 435 m tall Leopoldsberg. 22 benches invite you to rest, and 5 observation decks offer impressive vistas of Vienna.

At the beginning, the view of Vienna is still blocked by the Nussberg. Starting at around the middle of the hiking trail, at the large ravelin (a pulpit), there is the first view of the city, and on clear days you can see all the way to Rax and Schneeberg. Emperor Franz I remarked as early as 1798, “This view is incomparably beautiful!”

View from the Kahlenberg to Vienna

A cable car was planned here as early as 1927, from Kahlenbergerdorf to the Leopoldsberg and further over the Kahlenberg up to Cobenzl. However, the economic crisis delayed construction, and later the bus connection via the Höhenstrasse was significantly cheaper. A cable car is still said to be under consideration.

But it’s still about hiking. Once you’ve arrived at the top, you have several possibilities. You can simply return on the same path or hike along the city hiking path (Stadtwanderweg) 1a to the Josefinenhütte. From there, it’s best to take the city hiking path 1 back to Kahlenbergerdorf. That way, you will have been on the go for a leisurely 2 hours. You can also continue to head off to the Kahlenberg and to the Cobenzl, for instance, or you can go around the Nussberg shortly before the final descent. The paths are well-signposted.

You might wish to let your afternoon wind down classically at a wine tavern, and in the evening the best course is to sink into one of the Schick Hotels’ cozy beds!

We wish you lots of fun during your Vienna hikes in the autumn!