The Vienna Naschmarkt: the famous jewel at the heart of the city

“Would you like to taste some…” and “try this…” ring the cries. A visit to the Naschmarkt is a must for every visitor to Vienna as well as the Viennese themselves. It is one of my many favorite places in the city, and now and again I gladly take the time to enjoy the variety on offer here. You should come and see for yourself. I’m repeatedly amazed by the colorful array on display. Experience the great range of products here and the way in which they are laid out before you. A completely unique charm emanates from the Naschmarkt, or from the “Standln”, as the Viennese say.

You simply cannot stop looking at these exquisite colors, a potpourri of wares. Take in the aroma of local fare, but also exotic delicacies at the same time. Hear the typical market cries and, above all, use the opportunity to sample the delicious foods.

The present-day Naschmarkt originated in 1780 as the “Kärtnertormarkt” (“Carinthia Gate Market”) alongside the shore of the historical Vienna River at that time. This was outside of the city wall and to the south of the “Kärtnertor” back then. Today, the Kärntertormarkt would be located around the Karlsplatz area, not far from the market’s current position and always within view of the Secession.
A market which had been located within the city walls at the Freyung was dissolved around 1900 owing to a dispute between the market operators and the Schottenkloster (Scottish Abbey). It subsequently moved to the Wiedner Hauptstraße area, about where the Technical University is found today. The former market at Karlsplatz was also absorbed into this one.

The exciting emergence of the market

The name “Naschmarkt” was already in popular use as early as 1820, but the market was only officially designated as such from 1905.

After being regulated, the Vienna River was covered over for about 2 kilometers, and 120 structurally and stylistically identical brick market stalls were built on top of it. In 1915, the market’s office building was constructed in the area of today’s “Kettenbrückengasse” subway station around the Kettenbrückengasse entrance.

In 1916, an attempt was made to establish a wholesale market for fruit and vegetables on the area of land adjacent to the Naschmarkt towards the west. This was unsuccessful due to a lack of transport links. Today, this site is used as a parking lot during the week and has hosted a flea market on Saturdays for some decades now that is well worth visiting. 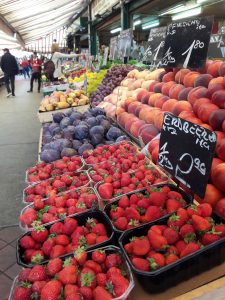 Speaking from personal experience, I can definitely recommend the flea market to you. It’s still possible to get hold of some fine antiques and collector’s items at reasonable prices. Furthermore, you simply must experience the atmosphere here, preferably during the warmer times of year. Haggle, debate or simply talk with the normally pleasant but also sometimes grumpy (typically Viennese) stallholders: glorious! Dive into authentic Viennese life.

The redrawing of the district border

It is also interesting that the border between the 4th and 6th Viennese districts used to run down the middle of the entire length of the Naschmarkt up until 2008. Thereafter, this border was “straightened” in that the entire Naschmarkt was brought within the confines of the 6th district.

I regard the not insignificant increase in the number of restaurants within the Naschmarkt a little more critically, but there are still more than enough market stalls.

Saunter through the market – tips 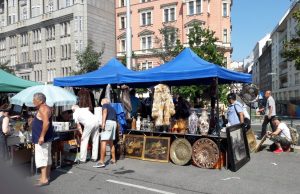 You should definitely plan to take a trip to the Naschmarkt on a Saturday and include a visit to the flea market as part of that, but be sure to begin early in the morning or at least before midday when all the stands are still open and the best pieces are still available at the flea market. 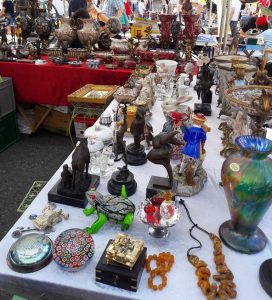 Great choice at the flea market

The historical Kettenbrückengasse station building on the U4 line is also noteworthy. It was constructed in 1899 in the Otto Wagner style.

Another superb place of interest is also located near Getreidemarkt towards Karlsplatz, namely the Vienna Secession, a contemporary exhibition building constructed between 1897 and 1898. It is a striking sight owing to its golden cupola. The building was built in the famous Secession style, and is the perfect finale to a visit to the Naschmarkt.