The Festival on Vienna’s Danube Canal

It’s that time again. In 2019 the Vienna Danube Canal will again become a festival zone and stage for a varied cultural programme from Spittelau to Franzensbrücke. The organizers of the Viennese Donaukanaltreiben have once again made an effort to create a great program for the period from 24th May to 26th May 2019, providing festival atmosphere and holiday feeling for all generations in equal measure. As always, admission is free.

All of a total of 12 stations offer live music acts from all music genres, DJ lines, after parties, music under the stars, a moonlight bazaar for shopping etc. all day long. Bands can gain stage experience at the speedband contest. The exact program you’ll find here. 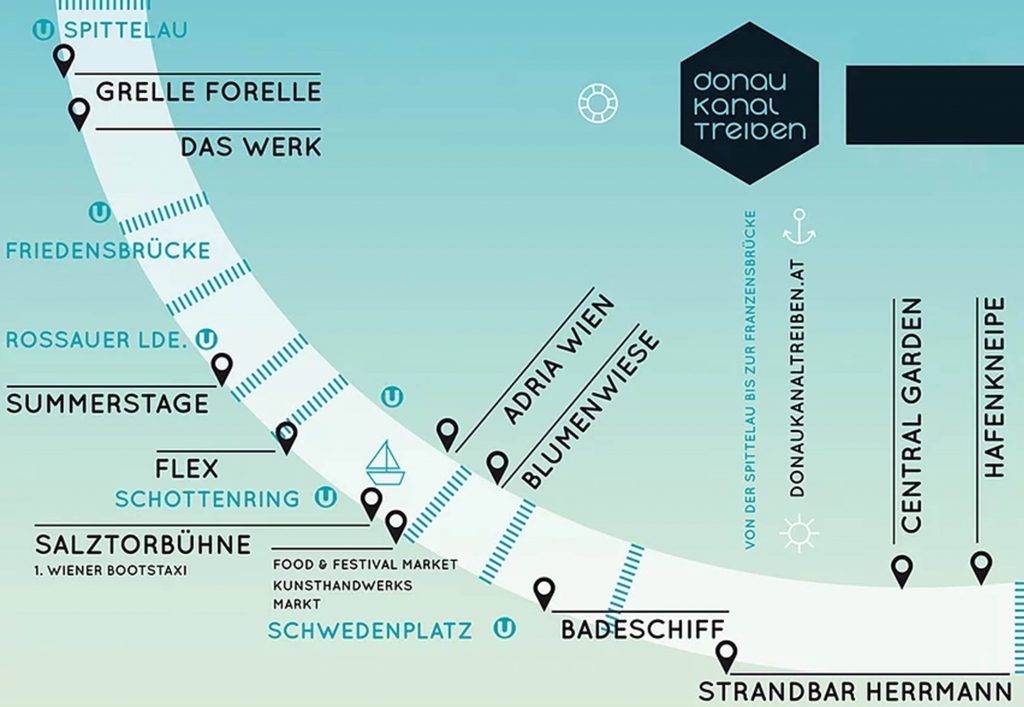 For example, you can start with a breakfast at the beach at the Herrmann beach bar and then taste culinary delights along the entire Danube Canal. Or how about cocktail happy hour, sitting comfortably in a deck chair?

At Spittelauer Lände 12, there is the Vienna Food Market on all three days with 35 tents, trailers and trucks offering street food, fashion and much more, as well as an arts and crafts market in a small tented village. 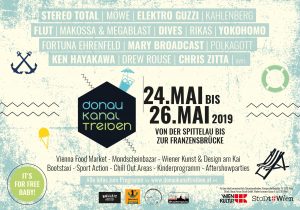 You want to observe everything from the water? Then take the Vienna boat taxi. Trips free of charge from approx. 4pm to 8pm. Entry point at the main stage at Salztorbrücke.

There is also a programme for the little ones: Childcare is offered at the trampolines next to the Summer Stage, at the beach bar Herrmann the original Viennese Praterkasperl comes to visit and there are dancing lessons for children at Lillis Ballroom.

And if you’re sporty: Yoga on the beach or Boater Cross races on the water should have just about everything covered.

History of the Danube Canal

It took a long time for this branch of the Danube to gain the significance it might have had in other cities long ago.

The main branch of the Danube, which was important for passenger and cargo shipping for centuries and where, on its flood-proof southwest side, the city of Vienna developed, ran here originally. Due to regular floods, the river Danube shifted eastwards and the Danube Canal remained. It branches off from the Danube at Nussdorf and flows in again at the harbour of Albern. On the island between the Danube and the Danube Canal today there are districts 20 and 2. In that sense Hotel Stefanie and the Hotel City Central are located on an island.
However, since the entire shipping traffic has been relocated to the Handelskai, there was sufficient space and infrastructure available, it took until 2010 for another ship terminal to be opened at Schwedenplatz. The Twin City Liner to Bratislava, as well as various cruise ships, departs from here.

Revival of the Danube Canal – Donaukanaltreiben

Already in 1946 there was a competition for ideas on how to design the left, sunny bank as this part was largely destroyed during the Battle of Vienna in 1945. Efforts in the 1970s to integrate the Danube Canal more into city life were only partially realised. It was not until the turn of the millennium that projects, primarily between Ringturm and Urania, were gradually implemented, on the one hand to create leisure and recreational areas and on the other to establish restaurants: in 1995 the “Flex”, the „Summer Stage“ every summer since 1996, starting as of 2000 the “Badeschiff”, the “Strandbar Herrmann”in 2005 , “Tel Aviv Beach” in 2009 or the “Motto am Fluss” in 2010, directly at the City ship terminal. Brand new this year: the “Blumenwiese”, directly at Schwedenbrücke.

All these venues and more are involved in Donaukanaltreiben 2019. You have 3 days to find your favourite location. Who has the best entertainment? Who has the best drinks and where is the best place to enjoy the sunset? The venues are open for you all summer (some of them longer).

From 10am until late into the night
24th May to 26th May 2019
The complete programme can be found here.