The five most beatiful churches in Vienna: part2 – St.Charles’s Church

Measured against the benchmarks set by the church, from today’s standpoint it’s not enough to view this church in its stylistic austerity—one must also highlight its historical significance as well as look back on the 17th century… 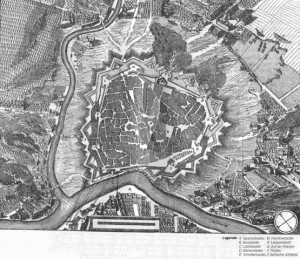 Here we are in the year 1683… in the midst of the second Turkish siege of Vienna. The first had already been considered done and over with and now merely a case for the history books…. Vienna was thus, as the residence city of the Holy Roman Emperor at the time, not only an important junction for Europe between the Danube and the Bernsteinstrasse—this being the High Baroque era—it was also the hypocenter of global politics at the time. Yet the city was threatened by a powerful aggressor, the Turks. Had foreign allies not hastened to assist—such as first and foremost King Jan Sobieski III’s troops under the command of Charles Joseph of Lorraine, and not to be forgotten is the employment of Prince Eugene of Savoy—the Battle of Vienna, in which the Turks were gloriously defeated, would likely have had a decidedly different outcome. (A detailed course of the battle, the allies and the scale of this conflict can be read in a very good Wikipedia article.)

This isolated conflict subsequently led to the major Turkish War (1683-1699) and thereby assumed a global political scale. The rest is history…

Vienna was made to bear the indirect consequences of this confrontation in the devastating plague epidemic of 1713. To overcome this epidemic, Emperor Charles VI made a pledge that included having a votive church built that should and would naturally bear his name… and it is precisely this incident and this vow that we have to thank for Vienna’s most significant sacral building of this era, the St. Charles’s Church.

Construction commenced in 1716, by none other than Johannes Fischer von Erlach. It was completed in 1739 by his son Joseph Emanuel, one year following the emperor’s death. Upon considerable reflection (simply put, there was insufficient space within the city walls), the newly erected church was built in the glacis or rock pediment at the time (and, believe it or not, this word has reentered the old Viennese vocabulary), which was partially planted with grapevines at the time… and it was ultimately dedicated to St. Borromeo (known for his heroic efforts on behalf of plague sufferers)…

Fischer von Erlach was a classically educated person who trained in his father’s sculpture workshops, in which he originally learned to sculpt before turning his efforts to architecture. Impressed and influenced by his travels to Rome and elsewhere, he created St. Charles’s Church and other buildings… and many impressions and symbols from his travels 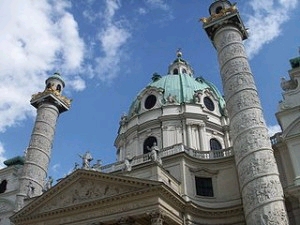 can be found in his rhetoric. The church resembles a sculpture, in a way, since its structure suggests to the viewer that it be observed it from ever-varying perspectives… and it demonstrates a very close affinity to modern sculpture, since it forces precisely this form of interaction.

… since 1978, a pool has extended in front of the church in which lies a sculpture by Henry Moore (incidentally, a gift by the artist and the only one in Vienna). The correlation is probably not entirely unintentional… as the thinking of both artists was multi-perspectival… and a beautiful bridge was thereby built between Vienna then and now… as “Prince Eugene, the noble knight, once built a bridge to Belgrade”… as is sung in an old Austrian song… 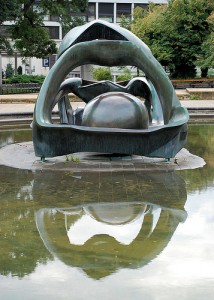 Now let us return to St. Charles’s Church. The Greek temple portico is reminiscent of the Hellenic temples of the Acropolis… in that its implementation was decisively influenced by the architect Andrea Palladio (see Venice) and thus corresponds totally to the spirit of the times and the then-contemporary taste.

The 33-meter-tall triumphal columns to the left and right of the portico are reminiscent of the monumental Trojan columns of Rome. On the columns of St. Charles’s Church are reliefs that climb all the way to the top—in so-called spiral reliefs—scenes from the life of St. Borromeo. The contents of these reliefs are enclosed by two bell or tower pavilions that remind one of Bernini’s towers for St. Peter’s Basilica; although they fit into the classical overall plan, they exhibit a Byzantine character and symbolically represent hope.

The architect thus succeeded in uniting different influences and thereby different cultures as well into an edifice: the canonical architecture of Athens on the one hand and the influences of the Byzantine empire, and thereby Constantinople, on the other, and Fischer von Erlach simultaneously makes reference to Rome’s Renaissance buildings (primarily St. Peter’s Basilica in this case).

… oval is overstretched by a powerful 72-meter-tall dome that is bristling with allegorical ceiling frescoes and is itself crowned by a high altar, that…

… likewise stems from drafts by Fischer von Erlach. Notice the impressive light display that is made possible only by the 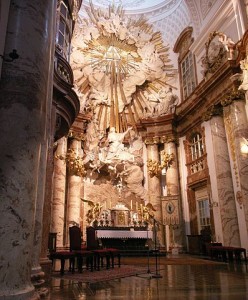 light wells in the vault. On the ceiling itself can be found a “Glory to St. Borromeo” and a “Thanksgiving to St. Cecilia” (patron saint of organ playing and church music), among other frescoes. The altarpiece shows us “St. Luke painting the mother of God (Jakob von Schuppen), and the baptistery contains an altarpiece by Daniel Gran: “Christ and the Roman leader” and much, much more…. It is not for nothing that St. Charles’s Church is considered one of Vienna’s most famous landmarks.

An impressive panoramic elevator enables the visitor, for a small contribution, to head up to the church’s ceiling and—once again in the modern sense of viewing art—this trip lends the eye new insights and outlooks; last but not least, let us not forget that churches have always been a place of meditation…

On the church’s website, you can get an impression of everything that awaits you as a visitor…

And should you happen to be a lover of classical music, you should definitely attend one of the concerts that take place regularly in the church… you may even discover St. Cecilia above you as the Baroque organ sounds. And perhaps she’ll impart to you a bit of the necessary essence here and there in order to picture for yourself, before your very own eyes, the magnificent idea of the gesamtkunstwerk in which virtually nothing was left to chance…

The images use are not copyright-protected; the copyright for the photo of the sculpture by Henry Moore can be viewed by clicking on it.