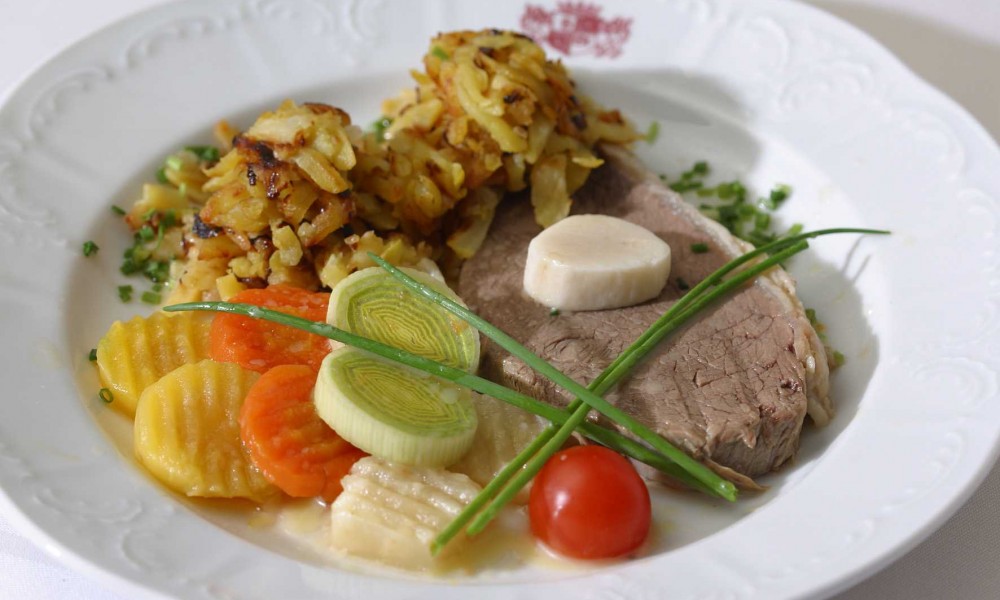 Anyone asking about Vienna’s typical culinary delicacies will, in addition to Wiener Schnitzel, receive “Tafelspitz” – boiled beef – as a response, usually both in a single breath. And that’s a justified response. Boiled beef is probably the most consistent dish in Viennese cuisine. The only changes are in the kind and quantity of side dishes: The “leading man,” namely the meat itself and the way it’s prepared, have hardly changed since the 19th century. It is Tafelspitz in particular that made beef uniquely famous, and today it is more popular than ever.

Why did this distinct love of beef develop in Vienna of all places? Already in the Middle Ages, it held great significance for the diet of all social classes within Vienna’s populace. Cattle could easily be taken to Vienna from the breeding grounds of the time – Hungary, Galicia, Marchfeld, etc. – which was a decisive advantage compared to short-legged animals such as pigs and sheep, since the corresponding transportation possibilities did not yet exist. In the middle of the 16th century, the Viennese City Council did not yet distinguish among the various cuts of meat when determining prices; only the prized parts such as tenderloin or sirloin traded at higher prices. The meat was mostly boiled, even back then, since people then also received beef soup as an appetizer. Beef was thereby affordable for the majority of Viennese. Due to its higher perceived nutritional value at the time, meat with high fat content was more popular than the leaner parts (this preference continued into the first third of the 20th century).

During Maria Theresia’s reign, Austrian and Viennese cuisine was considered typical beef cuisine in the monarchy’s enormous territory. Especially in Vienna and emanating from Vienna, there arose almost a cult surrounding boiled beef, which was an integral part of every banquet or festivity menu. This cult reached its first climax at the beginning of the 19th century. In 1829, for example, beef was served every day at the restaurant “Zum braunen Hirschen” in Vienna’s 3rd District, with the exception of fasting days dictated by the church. Boiled beef is also not absent from any of the cookbooks that were gaining in popularity at the time, such as those by Anna Dorn, Anna Hofbauer and the legendary Katharina Prato. Prato lived to witness the opening of Vienna’s first temple to beef, “Meissl & Schadn” on the Neuer Markt. 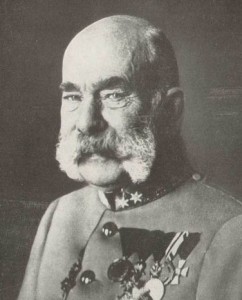 Dating as far back as 1836, there are records according to which boiled beef could be found on the imperial family’s menu every day. The dish reached its absolute zenith in popularity with Emperor Franz Joseph I. at the latest. Except on days of fasting, it had to be served to him every day. The favourite meal of the monarch, who was considered economical and frugal, was especially boiled Tafelspitz with the then-usual side dishes: (roux) seasonal vegetables. His wife, Empress Elisabeth, who also liked to eat the lean cut of the meat cold, also shared this preference. The beef soup, with its numerous combinations of ingredients, which came about while boiling the beef, was likewise beloved by the imperial couple.

After the years of deprivation during the First and Second World Wars and with the formation of the new Viennese cuisine, Tafelspitz and boiled 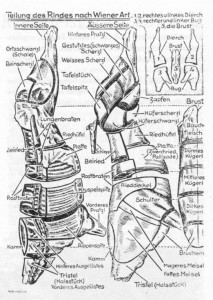 beef once again earned the place they deserved – which has continued to the present day. The discussion as to whether Tafelspitz, Hieferscherzel, Kavalierspitz or one of the other cuts is the ultimate cut of beef and best-suited for boiling is left to the personal preference of the individual gourmand. What continues to be the most famous is Tafelspitz, which has even been incorporated into literature, having been exalted in Joseph Roth’s Radetzky March, and it was even used as the title of a film in the 1990s.

One of the genuine secrets of the great success of boiled Tafelspitz or beef in Vienna has surely always been the variety of side dishes. While rich side dishes such as mashed potatoes, deep-fried cauliflower or even macaroni were used previously, today, the so-called “classics” have prevailed: apple horseradish, chive sauce, horseradish bread sauce, green beans with dill, romaine lettuce with peas, cream spinach, cream kohlrabi, pumpkin, as well as roasted potatoes, potatoes au gratin or bouillon potatoes. Slices of bone  marrow which have been boiled along with the main dish are often also added, as is the case at the traditional restaurant Kronprinz Rudolph in the Hotel Stefanie, the oldest hotel in Vienna.

Personally, I mostly cook a bit more beef (with my preference, “Weißes Scherzel”) and soup – the meat is wonderful for preparing cold as a beef salad, especially in the summer, and the soup can be frozen in serving-sized portions so that you always have a tasty stockpile in store.

May Viennese beef never fall out of fashion…

Which side dishes do you enjoy eating most with boiled beef? I look forward to your comments!