The second breakfast of the Viennese should in no way be considered a morning snack – the “Gabelfrühstück” (literally “fork breakfast”) is more of a genuine “pre-meal” and is one of the few original Viennese traditions that probably emanate from French cuisine, although as with so many things there are various theories as to how it came about.

One variant of the Gabelfrühstück’s origins assumes that as early as 1250 “Mursels” (from the French “morceaux,” meaning morsels, tidbits, samples or little pieces) were handed as a morning snack to the traveling guests and minnesingers at the Viennese court. In 1807, Joseph Richter wrote an enthusiastic article in the Eipeldauer Letters, a popular and widespread periodical for the masses, praising the foods on offer for the Gabelfrühstück at the Gasthof beym Erzherzog Karl (Archduke Karl Tavern), located on Vienna’s Kärntnerstrasse.

The Gabelfrühstück achieved genuine popularity in Vienna during the so-called “Phaeaciandom” (“lotus eater”) era around 1900. At the turn of the century, anything French was considered “trendy” and “in.” In the upper levels of society it was in any case customary to have several meals a day, and this warm meal even came in handy and made sense to the ever-growing numbers of government officials within the empire, who often arrived to work as early as 6:00 or 6:30 in the morning. 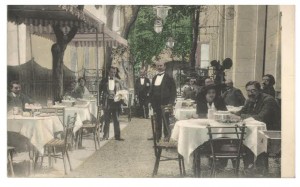 The French déjeuner à la fourchette – which could be eaten with only a fork (hence the corresponding German name) – was eaten as a Gabelfrühstück between 11:00 AM and 12:00 PM, mostly at inns or restaurants. Popular places to go in downtown Vienna were the bar in the Grand Hotel, the “Gerstner,” the “Sacher,” the “Stiebitz” (now “Zum schwarzen Kameel”) and the “Demel,” where one traditionally drank a glass of Nussberg wine with “Hachée,” a minced meat patty.

Many more typical dishes of today’s Viennese cuisine were popular as a Gabelfrühstück, which often turned out to be the actual lunch: Salonbeuschel (heart, lung, spleen and liver), Bruckfleisch (organs/innards), goulash (possibly Viennese-style) or minced meat were among the standard dishes. If the obligatory Backhendl (fried chicken – see article from January 17, 2012), Schweinsbraten (roast pork) or beef were served, the meal could no longer be called a breakfast – comparable to today’s generally typical “brunch” offers, which can also be categorized more as a lunch.

The Gabelfrühstück was not only popular amongst the “common people” – this Viennese tradition could also be found at the court in Emperor Franz Joseph I’s daily routine. As the emperor already had his first breakfast around 5:00 or 6:00 AM (black coffee or tea, shortbread, butter and cold ham), a second breakfast, consisting of soup, boiled or fried beef (he was especially fond of Tafelspitz – see blog article of March 15, 2012) or poultry with English vegetables. With his meal, His Majesty drank a beer or some red wine, and afterwards black coffee. This is how the time up to the main meal at the court – the dinner (with at least six courses) between 6:00 and 7:00 PM, in which all the members of the imperial family who were present at the court assembled – could best be bridged.

As one of the emperor’s favorite foods for his Gabelfrühstück, frankfurter sausages were circulated around the table – appreciated by Franz Joseph due to their easy digestibility and fluffy consistency (a relevant anecdote can be found in the book Heut’ muß der Tisch sich völlig bieg’n). –  With a brief interruption during the First World War, the Gabelfrühstück tradition was maintained up to the end of the 1930s. As of the beginning of the Second World War and the concomitant years of hardship, the Gabelfrühstück’s heyday also came to an end.

There is now hardly room for the classic Gabelfrühstück in today’s fast-paced fast food era. This is probably a tradition that will remain at home in “good, old times.” I wish, somewhat tongue-in-cheek, to quote a passage from the poem “Der Phäake” (“The Lotus Eater”) by Josef Weinheber (written in the mid-1930s):

… “For my Gabelfrühstück I deserve
a mug of beer, some boiled meat,
a goulash now and again–
and organ meat is of course a treat.
A juicy leg of beef, not too greasy,
lest the noon be not too easy.” …