Ice Cream – Then and Now

Vanilla, strawberry or chocolate – which shall it be?

Summertime is ice cream time! Who doesn’t love licking a refreshing ice cream on a hot summer day? Not long ago, during an evening stroll along the Rotenturmstrasse – carrying an ice cream cone, of course – it hit me all of sudden: the question, who invented ice cream?

“Cool” stories on the history of ice cream

The beginnings of ice cream are not entirely clear, as is so often the case whenever one seeks the origins of dishes or foodstuffs. One supposition is based on the assumption that the first ice cream was already known in ancient China 5000 years ago. Other variants are that the Arabs brought their so-called “sharbat” or “sherbet” to Europe by way of Sicily, the crusaders brought it with them to Europe, Marco Polo brought the novelty back with him from his travels….

What has been proven is that “natural ice cream” already existed in the time of the ancient Romans. They took ice and snow from Vesuvius and Mount Etna and mixed this natural ice with fruits and flavors. Alexander the Great is also said to have snow brought to him by summoners during his travels and ate it with honey, fruit and spices mixed together. Around 1200 CE, the Chinese poet Yang Wan Li sang about “frozen milk” in the cellars of affluent Chinese bourgeois. In the 16th century, Katharina von Medici presumably brought ice cream made of water and fruit juice or fruit purée (Granitá) from Paris to Italy. 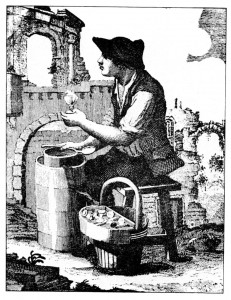 History’s first ice cream cookbook was published in Naples in 1775 under the title De Sorbetti by Filippo Baldini. The first ice cream machine (with hand crank!) was invented in 1843, while the refrigerating machine from 1876 greatly simplified ice cream production since people were no longer dependent on blocks or slabs of ice having to be stored. Ice cream thereby became affordable to commoners and the rank and file.

In 1797, people in Vienna had but one thought in addition to the Napoleonic occupation: the “Grforene” (“frozen”) from the “Limonadenhütten” (soft drink stands) on the Graben or Hoher Markt in central Vienna. The new, icy taste sensation was so well-received by the snacking Viennese that the Wiener Theaterzeitung (Viennese Theater Newspaper) of the time reported on 6000 cups of ice cream that were consumed in the “Ochsenmühle” at the so-called Paradeisgartl alone (where the Volksgarten is located nowadays). By the way, today’s Demel confectionery began its career back then as an ice cream parlor across from the old Burgtheater on St. Michael’s Square.

At the end of the 19th century, during the Biedermeier era, the “Gfrorene” also attracted numerous top chefs, such as the legendary Katharina Prato, and was prepared in all kinds of flavor variations. Not to be forgotten is also the famous violet ice cream (Veilcheneis) from Empress Elisabeth, which she even had prepared fresh during her travels (you can read about this and try it at the Restaurant Kronprinz Rudolph in the Hotel Stefanie).

The first ice cream on a stick was patented in America in 1923, and the first soft ice cream was invented in Great Britain in the mid-20th century—the first ice cream factories such as Schöller and Langnese also came about during this time. Fortunately, with these manufacturing possibilities, the hygienic aspects and regulations also gained in significance, which guarantees today’s risk-free enjoyment of ice cream. 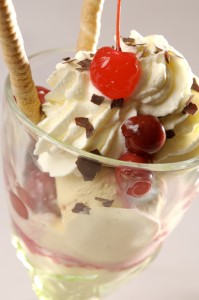 Which do you like best? Creamy milk-based ice cream, refreshing sorbet, low-calorie Granité or half-frozen parfait? Or is soft ice cream your favorite? The sky’s also the limit in terms of flavors nowadays: From the classics of vanilla, strawberry and chocolate, to exotic flavors like passion fruit, melon or coconut, all the way to entirely new creations such as goat cheese, basil or saffron-honey—the right ice cream specialty can be had for every taste, whether it’s served in a large ice cream cup or in a simple cone.

According to the Austrian Federal Economic Chamber, the flavor mango is the 2012 ice cream of the year. The classics, strawberry, chocolate, vanilla and hazelnut also remain popular, while the more adventurous go for apple strudel, chocolate-ginger or green tea ice cream.

Now where is the best ice cream in Vienna?

Here are my personal top 5:

In this spirit, I wish you a wonderful, “ice-cool” summer!