Do you know this too? You’re strolling through the city, bought a lot and then your stomach starts growling? Or you’re downtown with friends late at night and you get a little hungry? Or you were really stylish and elegant at one of the many great Viennese balls, and after dancing the night away you’re in the mood for a snack? Where do you go, to one of the American burger chains? Or do you prefer to grab a tuna wrap, or a quick salad or small sandwich? I’m not Viennese by birth, but I can’t resist a crisply fried cheese sausage or a browned bratwurst or a tasty Leberkäse roll every once in a while. For many ball attendees, the concluding visit to a sausage stand (Würstelstand) is practically obligatory and is simply a fixed part of a successful night at the ball.

A short history of sausage

History’s first known sausage eater was ostensibly Antinus, the son of Eupithes, whom Homer had eat in this quote from the Odyssey: “goats’ stomachs, filled with fat and blood, which we laid on red-hot coals for the evening feast…” – comparable to today’s blood sausage. In the ensuing millennia, sausage went on to become a genuine culinary triumph in occidental culture.

In Vienna, sausage only really became popular after the Napoleonic wars and the state bankruptcy of 1811, when the Viennese longed after a crisp roast yet meat and game had become too expensive. “Durri, durri!” (“Hard, hard!”) the Italian Salamucci – the salami merchants in Baroque Vienna, extolled their wares. At the beginning of the 19th century, beef and pork were primarily used for sausage products, although veal was sometimes used. Yet in Vienna at the time there were in principle only eight types of sausage: Selchwürste (cured or smoked sausage), Cervelade (at the time a cooked sausage made from pork), Extrawurst (an Austrian scalded cold cut), Bratwurst (sausage usually composed of veal, pork or beef), Leberwurst (liverwurst), Blutwurst (blood sausage), Augsburger (made of veal or leaner pork and not smoked) and Presswurst (head cheese), and Knackwurst came later. Half a century later the Viennese butchers had already upgraded – more than twenty types of sausage were on offer, among them a genuine, made-in-Vienna (in the Simmering district) Nürnberger (small, thin bratwurst from Nuremburg), along with Braunschweiger (type of liverwurst that is nearly always smoked), Gothaer (made from the choicest pork and seasoned without garlic), Debrecziner (pork sausage heavily spiced with paprika, garlic, pepper, marjoram, etc.), Rhenish and Polish sausages.

On Thursdays and Fridays there were sausage days in the taverns. Only when goulash conquered Vienna did sausage undergo a brief crisis – the typical Viennese solution was to combine both of them, and “Würstel mit Saft” (sausage with gravy) was invented.

One sausage even achieved worldwide fame – the Frankfurter sausage. Johann Lahner, who came to Vienna in 1804 and made the first “Lahner’sche Würstel” (Lahner sausages) at building no. 56 in the Altlerchenfelder Hauptstrasse, is considered the inventor of this creation, which he later named “Frankfurter sausages” and which outside of Vienna are described as “Wiener Würstchen” (small Viennese sausages).

The history of the Würstelstand – or sausage stand – hearkens back to the imperial monarchy. They were invented in order to secure the possibility of an income for disabled veterans – the first sausage stands were operated by former soldiers. The oldest sausage stand still in existence in Vienna is “Leos Würstelstand” (Leo’s Sausage Stand), which has existed since 1928. At truly “authentic” Viennese sausage stands, you’ll also find Viennese “Schmäh” (a uniquely Viennese charm) in addition to sausage – for instance, a cheese sausage with a “heel” of bread becomes “a Eitrige mit an Buckl” in Viennese dialect (“festering pus with a hunchback”), accompanied by “an 16er Blech” (a can of “Helles” lager beer, preferably from the Ottakringer Brewery in Vienna’s 16th District). You can find an entertaining “Würstel ABC” at http://wien-wuerstelstand.at/wuerstel-abc.html – so you can understand everything that is sometimes said at Viennese sausage stands.

A variety of sausages

Among the most popular types of sausages at Viennese sausage stands are, aside from the cheese sausage (Käsekrainer), frankfurters, burenwurst, Waldviertl sausage, bratwurst and Debrecziner. Leberkäse (lit. “liver cheese,” a baked loaf made from finely ground corned beef, pork, bacon and onions) in several varieties is also a popular food. In addition, depending on their personal preferences, people will eat a roll or bread, pickle, pepperoncini or pickled pearl onions, accompanied by spicy or sweet mustard, horseradish or ketchup. The product line also includes hot dogs, Bosna (an Austrian type of hotdog made from bratwurst, served on a white roll with onions and mustard and/or ketchup and curry powder), Schnitzelsemmel (schnitzel sandwiches), Langos (deep-fried flat bread), pommes frites (French fries), Rollmops (pickled herring) and – as a dessert – Manner Schnitten cookies or Pischinger Ecken (chocolate-covered wafers with nuts). In winter, you often also get Bratkartoffeln (fried potatoes), Erdäpfelpuffer (potato fritters) or Maroni (roasted chestnuts). Whether you drink a bottle or can of beer or something alcohol-free is left to your individual taste. 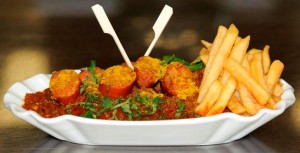 The most popular and best-known Viennese sausage stands are “Bitzinger” near the Albertina, the sausage stand at Hoher Markt, the Naschmarkt sausage stand (stand no. 67), the “Kiosk” in the Schleifmühlgasse in Wieden (Vienna’s 4th District), the sausage stand at the Vienna State Opera and the sausage stand “Leo,” which – as already mentioned – has been in existence since 1928. Specialties “vom Würstelstand” such as our signature curry sausage can also be found in the Wiener Wirtschaft – the pub among the three Schick restaurants.

Straight off the bat: In Austria, international fast food chains and kebab stands generate roughly 1.4 billion euros in turnover each year, half of it in Vienna, and this is in an upward trend. The respective rankings of McDonalds, Burger King, Nordsee and Starbucks are mentioned. The international spectrum is complemented by Italian and Chinese restaurants, and Japanese, Indian, Thai, Greek and many other cuisines form additional competition for the sausage stands while simultaneously enriching the range of available foods and the selection of different delicacies and expanding culinary horizons.

All the same, there’s one thing that all these international restaurants and eateries can’t offer in my opinion, and that’s the variety of guests that often converge at Vienna’s sausage stands. Whether they’re young or old, well-heeled or poor devils, drunk or sober, Your Honor in a fine bespoke suit or a construction worker in work clothes, single student or a family with children, queen of the ball or a homeless person – you’ll seldom find a more interesting constellation gathered at one place like at a Viennese sausage stand!