Goulash – a Viennese original, or is it really Hungarian after all? 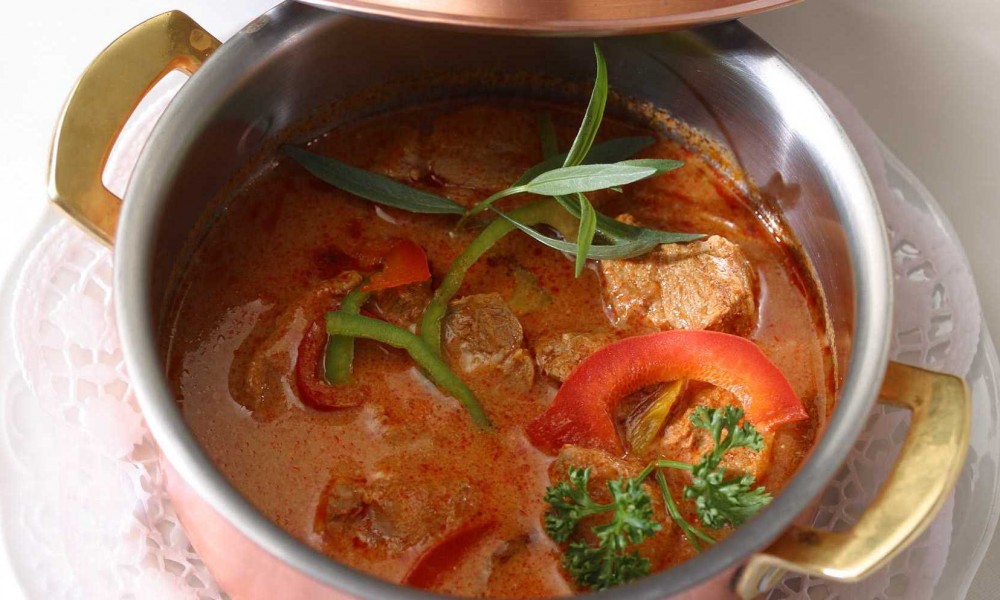 An indispensable dish at Viennese taverns

In the cold season, dishes that warm us up are at the top of our menus. Goulash truly deserves its place among such dishes and, at least for me, regularly finds itself on my plate, whether it be classic or beef goulash, as a “light” variant with turkey and bell pepper strips, hearty with beans, or even vegetarian with potatoes and lots of vegetables – it goes over well with us and with guests as well, it’s great to prepare and can sometimes be eaten two days in a row. In fact, it keeps getting better the longer it “ripens.” It’s therefore high time to give some thought to this long-established specialty. Now does the ever-popular goulash come from Hungary or did it in fact arise in Austria, or Vienna in particular?

History of a classic

The dish and the word “gulyás” come from Hungary. “Gulyá” means cattle herd, and derived from that is “gulyás” the cattle herder. While the classic Hungarian gulyás is quite similar to Austrian goulash soup, for us goulash in today’s sense is actually a ragout made from beef and seasoned with bell peppers. It developed in the mid-19th century from a dish from Hungarian shepherds that was prepared in a kettle and named “gulyás hus” (beef). By way of Bratislava, the dish made its way to Vienna, where the bell peppers originally used were replaced by paprika powder – the Viennese Saftgulasch, colloquially called “Gollasch,” was thus born. “Goulash” is therefore a genuine Viennese child that merely borrowed its name from Hungary. 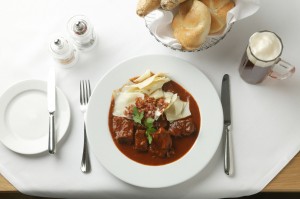 During the time of the Austro-Hungarian empire, contact between Austria and Hungary was close, and the fashionable dish goulash soon found its way back to its native country of Hungary. To avoid confusion, the dish was and continues to be called “pörkölt” in Hungary, and it can also be made from pork or veal.

In connection with goulash, two more terms shouldn’t go unmentioned: The “Gulaschkanone” (“goulash cannon”) continues to be used to this day as a lighthearted term for a mobile field kitchen. The term “Gulaschhütte” (“goulash lodge”) describes a Viennese restaurant that breathes new life into night owls with a fiery goulash, generally until midnight and beyond, so that they can be invigorated for a long, boozy and jolly night free from signs of fatigue.

I don’t wish to deprive you of some brief ABCs of goulash:

Andrassy-Gulasch: Beef goulash with haluska (small noodles with curd cheese and bacon cracklings) as a side dish.

Bohnengulasch: With beans, bacon, sweet paprika powder, garlic and vinegar, refined with pepper strips and diced smoked meat – can also be prepared with sausages or, in a rather modern way, with smoked tofu in place of bacon.

Erdäpfelgulasch: Classically prepared with bacon, onions and potatoes; in the end frankfurters or Braunschweiger sausages are sliced into the finished goulash.

Esterhazy-Gulasch: Beef-cream goulash with root vegetables and capers, often with peas as well, serves with salted potatoes. Named after the Hungarian dynasty of Esterházy of Galantha.

Fiakergulasch: Beef goulash with one frankfurter sausage, a sunny side-up egg and a fanned pickled gherkin, generally eaten with bread rolls, potatoes or bread dumpling. This variant probably arose during a time in which the Fiaker (horse-drawn cabs) could not afford a lot of meat and simply substituted the missing amount with cheaper sausage. 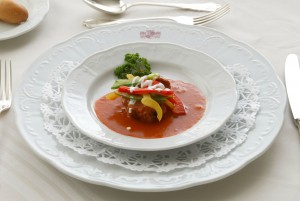 Kalbsrahmgulasch: Made of stewed shoulder of veal, with peppered cream sauce, served with small dumplings.

Szégediner Gulasch or “Székely Gulyás”: It is often incorrectly claimed that this comes from Transylvania. The Austrian name points to the Hungarian city of Széged, which is probably also not the case. More probable is that it was invented in 1846 in an established restaurant in Budapest, according to legend, due to the demand of an overnight guest, a hungry librarian and poet named József Székely, who showed up in the restaurant after the kitchen had closed and – because he was denied a menu at so late an hour ­– asked for merely a portion of pörkölt and sauerkraut to be warmed up. This combination became – once it was refined with a dollop of sour cream – popular and well-liked. Since Szégediner Gulasch is often made from pork, it could possibly also come from Viennese cuisine.

There are many additional variants, such as “Hunyadi-Gulasch,” “Palffy-Gulasch,” Kaisergulasch, Pressburger, Karlsbader or Triester Gulasch, and many more. In the Viennese taverns – Wiener Wirtschaft among them – goulash culture happily continues to be maintained, and numerous guests are happy about this classic dish, this Viennese original with Hungarian roots – a tasty example of the Austro-Hungarian monarchy that enjoys great popularity to the present day.

Let me know what your favorite goulash is. I’m excited to find out which variant has the most fans…