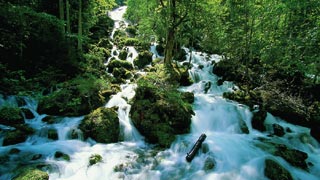 The city of Vienna happily regards itself as the city with probably the best supply of drinking water in the world. Even at peak times, we always have sufficient drinking water of the highest quality available from the Lower Austrian / Styrian Alps.

In the last half year, I have dealt very intensively with the Ecolabel project – successfully, as all five Schick hotels have in the meantime been awarded the Austrian Ecolabel for tourism companies (Österreichisches Umweltzeichen für Tourismusbetriebe) (report). Over the course of this work, one inevitably arrives at the topic of water. I researched a bit and have come across very interesting details, which I’d like to summarize for you here. My source: Wiener Wasserwerke.

The history of Vienna’s water supply goes way back. The Romans already had spring water supplied from the south of Vienna to Vindobona.

Until into the 16th century, people in the city got water via domestic wells. The first water pipeline on record – the Siebenbrunner Hofwasserleitung – was constructed in 1553 and primarily supplied the imperial palace. At the time, residents of the city suffered serious water shortfalls. The domestic wells were often contaminated, which sparked epidemics time and again. In the 18th century, the “water man” and the “water woman,” who sold water from drums on the street, marked Vienna’s townscape.

With the incorporation of the suburbs into the city in 1850, the water supply finally became insufficient, and the planning of the first mountain spring water pipeline commenced in 1864.

In 1873, after a three-year construction period, when the Hochstrahlbrunnat Schwarzenbergplatz was put into service by Emperor Franz Joseph I, Vienna’s first mountain spring water pipeline was opened. It became a symbol of relief from deficiency of water and the danger of contamination. The domestic wells were replaced by communal water taps.

To the present day, Vienna’s water comes from the Schneeberg, Rax and Schneealpe area.

Vienna grew, and it thus did not take long before water was in short supply. In 1900, under mayor Karl Lueger, work commenced on the second mountain spring water pipeline, from the Styrian Salzatal in the Hochschwab mountain area. The pipeline grew to over 180 kilometers long and to this day has over 100 aqueducts. Originally, the entire water pipeline was described as an aqueduct, and later only the bridges, manufactured in the ancient Roman style.

Emperor Franz Joseph I inaugurated the water pipeline in 1910, and the two fountains in the Rathauspark bear witness to this era. Thanks to the now-assured fresh water supply, shower baths and public open air baths could now be built, which in turn benefitted the public health.

Where does the water that our guests are able to drink at the Schick Hotels come from? I’ll let you know in part 2!