Get to know Vienna by subway with the U2

Sights Along the U2 Subway Line

Even though subway stars sometimes fill the stations with music, including 2 along the U2 subway line (Karlsplatz and Praterstern), the purple subway in Vienna should of course not be confused with the legendary Irish rock band. The U2 passes under part of the Vienna Ringstrasse and runs all the way to the modern district of Seestadt Aspern.

U2 – The Purple Subway Line 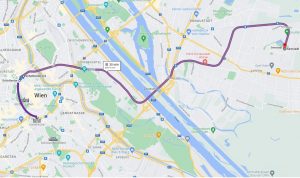 Sightseeing with line U2

The U2 runs from Karlsplatz in the city center across the Danube to Seestadt Aspern: 16.7 km in about 31 minutes. For a long time, it was the shortest subway in Vienna with only 6 stations (Karlsplatz to Schottenring). For the 2008 UEFA European Football Championship, it was extended to the stadium. After that it was extended 2 more times and today it runs to Seestadt.

Construction is underway on the subway. On the one hand, the U2 is being extended to the south, and on the other hand Vienna is finally getting a U5 (you may have noticed there has already been a U6 for a long time). The section of the U2 between Rathaus and Karlsplatz will become the U5 and will be extended from Rathaus north-east to Hernals. The U2 from Seestadt will then be extended from Rathaus south to Wienerberg. Completion is planned for 2026. During this time some stations will be closed.
However, these are all future dreams, so for now let us introduce you to the current stations and the sights worth seeing along the current U2 line.

CURRENT SUBWAY STATUS: Until autumn 2023, the U2 will only run between Seestadt and Schottentor. The U2Z tram is available to take passengers the rest of the way to Karlsplatz. 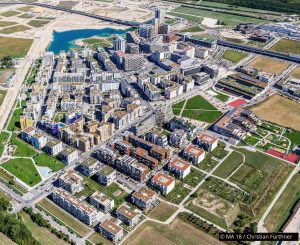 Seestadt Aspern is one of the largest urban development areas in Europe, making it the largest construction site in Austria and a constantly growing, sustainable district with a high quality of life, perfectly connected, future-oriented, diverse and open. Guided tours are offered, but you can also take a virtual tour to observe the progress of the construction work and the new district as it is being created.

A new residential project was also created at the Donaumarina station, which can be viewed on a walk along the Danube. In addition, there is a harbor with private dock space for a total of 200 boats.

Football games, big concerts and various sporting events all take place in the Ernst Happel Stadium. You can also go shopping in the Stadion Center.

Vienna has its own trotting course in the Krieau. It opened in 1878 and can certainly look back on a rich history. 250 races are held here on more than 25 race days per year.

A cosy round with the “Riesenrad”

Direct access to the large, modern exhibition grounds in Vienna that stretch as far as the Krieau station.

Here you will find yourself at the foot of the Riesenrad Ferris wheel and at the main entrance to the Prater amusement park. The Kaiserwiese field in front of the park offers you a good view of the Ferris wheel. Perhaps you would also like to visit the Vienna Planetarium?

Here you will find rich Vienna tradition. The Vienna Augarten is home to the world-famous porcelain factory. Nearby, you will also find the MuTh concert hall, where the Vienna Boys’ Choir also performs.

Take a walk along the Danube Canal or marvel at the current “wrapping” of the Ringturm.

Just a few steps through the Sigmund Freud Park and you will find yourself right in front of the impressive neo-Gothic church, the Votivkirche. It’s worth having a look inside as well.
The opposite direction takes you along the Schottengasse to the Freyung. There you can visit a very special “exhibition” in the Schottenstift. Blind guides lead you through the “Dialogue in the Dark”.

The station will be the new node where the U2 and U5 meet, so there is currently a lot of construction activity going on here. The square in front of the Rathaus, or Vienna City Hall, is a hotspot virtually all year round with various festivals, markets and the Vienna Ice Dream…

Anyone interested in the new construction of the U2xU5 mentioned above is very welcome to visit the Wiener Linien information center. They offer an interactive exhibition that encourages you to try things out and invites you to explore the fascinating world of subway construction and take a look underground and into the future of Vienna public transport. Admission is free.

As you might guess by the name, this is the perfect place for museum lovers with enough for you to explore for hours, days and even weeks… If you still have the energy, you will find the Hofburg just across the way.

Perhaps when the U2xU5 opens, the Wien Museum on Karlsplatz will also be open again, which is dedicated to great Vienna themes with changing special exhibitions.

The Schick Hotels Along the U2 Subway Line

You can easily reach the U2 from all Schick Hotels.

From Hotel Stefanie and Hotel City Central, start your U2 day at the “Taborstraße” station (7 minutes on foot).  From Hotel Capricorno you need 4 minutes longer to reach the station “Schottenring”.
The ideal station for guests at Hotel Erzherzog Rainer is “Karlsplatz” (10 minutes). From Hotel Am Parkring you can also walk to “Karlsplatz” (15 minutes), or you can take the U4 one stop from “Stadtpark”.