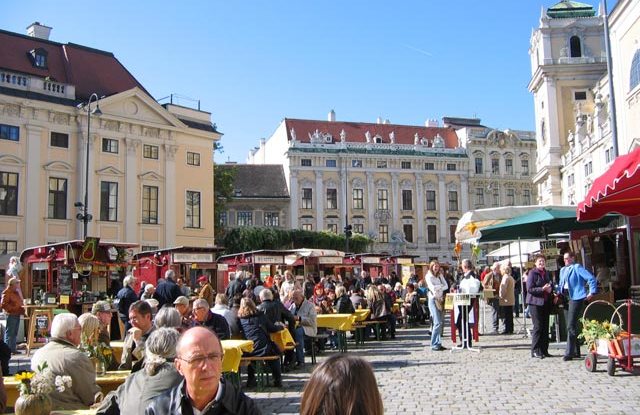 How about a bit of commodity economics including Viennese humor?

You’ll seldom get fresher products than at the open-air markets, and you’ll get the appurtenant explanations and tips while you’re at it. Often, knowledge about the way the food is cultivated, the harvest and the further processing of the products have been handed down for generations. You can count yourself lucky should one or another vendor be at the market stand – new ideas for recipes and advice on how to store the foods so they will keep as long as possible are then accompanied by the proverbial Viennese humor (“Schmäh”) or almost amicable small talk. Prior to purchase, you can often try out and taste whatever is supposed to end up in your shopping bag – this is a perfect shopping experience.

Here, in the fourth and final part of the “Viennese Markets” series, I’ll introduce to you a couple of wonderful examples for your next shopping experience.

The Karmelitermarkt in the 2nd District 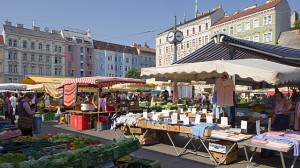 One of the oldest of Vienna’s markets still in existence is the Karmelitermarkt. As early as 1671, residents of the “Werd” (Middle High German for island) received the prerogative to hold a farmers’ market for foodstuffs and livestock in front of the Karmeliterkirche (Carmelite Church). The “Markt Im Werd” continued to expand in the ensuring years, until it was relocated to the area that continues to be used today. Back then, there were 215 stands, and up to 200 vendors in the summer months. After the Second World War, new market huts were erected, and a pronounced reorientation to gastronomy occurred as early as the 1970s.

Today, the Karmelitermarkt (near Schick-Hotels Stefanie and City Central) is considered one of Vienna’s hippest markets – trendy hotspots and high-quality foods attract up to 7500 visitors each week. A farmers’ market is offered on Fridays and Saturdays, focusing on organic products and slow food.

Imagine the following picture: The Viennese suburb Neulerchenfeld in the year 1786, a well with tap water from the Vienna Woods flowing into the Hofburg Palace, and merchants settling nearby. Perfect, right? Emperor Joseph II seems to have thought so as well. He authorized the market in the Brunnengasse. In 1872, the well needed to give way to a horse-drawn streetcar. At that time a market emerged at the former Exerzierplatz of Yppenheim; some years later the market in front of the Neulerchenfeld Church was likewise relocated to this location. The Yppenmarkt and the Brunnenmarkt slowly grew together. Until 2005, the Brunnenmarkt was purely a street market (incidentally the longest in Europe), which meant that all stands had to be taken down completely once the market closed. 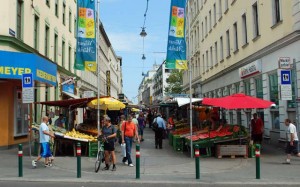 Meanwhile, the street is taboo for traffic and everything is permitted to be left overnight. Yet everything continues to seem improvised. There are no permanent stands, yet this is precisely what gives this market its unique flair. 170 vendors offer their colorful, multicultural wares to as many as 60,000 customers each week, at consistently affordable prices. There are many eateries located at Yppenplatz. Since 2007, culture in the form of music, dance and much more is even offered in the Brunnenpassage – with free admission. Whether Little Istanbul or Soho was the inspiration for this… it doesn’t matter – the Brunnenmarkt is an urban hotspot in any case.

The Rochusmarkt in the 3rd District

Prior to the turn of the 19th century, active trade of agricultural products, beginning with flowers and moving on to foodstuffs, developed at this location. In the beginning, the market was named the “Augustinermarkt” after the neighboring monastery, until the market was forced to give way to the construction of the U3 underground line in the 1980s. The market was held next to the Rochuskirche (St. Rochus Church) until 1991, and the name Rochusmarkt established itself after the relocation and in regard to the neighboring church.

After having a rather average range of items on offer, the Rochusmarkt has in recent years molted into one of Vienna’s most popular open-air markets, to which creative and innovative restaurants nearby, and of course its easy reachability with the U3 underground line, have no doubt contributed significantly. Small and manageable, yet the feeling here is urban.

The Biomarkt on the Freyung in the 1st District

Tradition ranks first here – there was already a horse market on the Freyung in the late Middle Ages and in the 18th century a flourishing victuals market. “Good and high-quality” products were already on offer here in 1871. For approximately 20 years, the Biobauernmarkt Freyung (Freyung organic farmers’ market) (a temporary market), from where the Schick-Hotel Am Parkring is only a few minutes walking distance away, has been held here on certain days.

Roughly 20 market stands offer their organic foods here. The products on offer range from meat and fish to baked goods, honey, wine and cheese in organic quality, all the way to natural cosmetics. Arts and crafts or basket and wickerwork can also be purchased here. 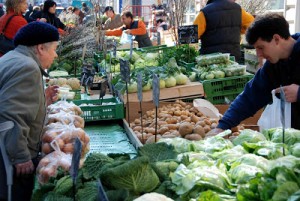 The surrounding restaurants and sidewalk cafes regale visitors with organic specialties – from breakfast to coffee and cake. You should especially note the Advent and Christmas market on the Freyung, which flows seamlessly into the Biomarkt and sets the mood for the most beautiful celebration of the year.

Additional markets likewise worth a visit are

I wish you lots of fun during your next shopping expedition at one of Vienna’s many markets!