A story of success

Yes, you’re reading that right – not Viennese cuisine or Viennese wine, no, Viennese beer plays the lead role in this and a followup article. Even if Salzburg is now considered THE beer city in Austria, and Vienna, with its wine taverns (Heurigen), is more associated with wine, one shouldn’t overlook the fact that it was here (and nowhere else) that Anton Dreher invented the world-famous “Viennese lager” in the 1830s on the one hand, and on the other that nowadays high-quality beers increasingly accompany fine dining. This made me curious, so I decided to take a closer look at the popular “Viennese beer.”

A journey back in time

Vienna had always been a wine city, yet the history of breweries in Vienna harkens back to the High Middle Ages. We know from a beer law dating from the year 1212 that beer was permitted to be imported into Vienna. In the course of legal transactions between Schottenstift and Stift St. Pölten in the 13th century, witnesses were named “Prew” or “Praxator” and beer was brewed as well as served, with strict tavern closing times that were rung in by the beer bell. To this day, the “Bierringerin” (“beer ringer”), completed in 1772, hangs in St. Stephan’s Cathedral and is part of its chime. 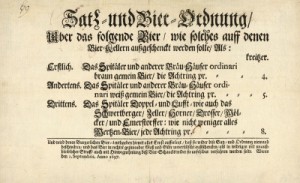 Already in the 14th century there were taverns in Austria in which beer was served, and the first Viennese brewery to receive official mention was opened in 1384.

Brewing beer was strictly regulated. Beer was mostly brewed outside of the city walls, mostly in mills along the Wien River, and later also in Leopoldstadt. This minimized the risk of fire and eased taxes on beer. The Bürgerspital held a monopoly on brewing beer in Vienna as of 1432. If it was unable to fulfill demand, beer was purchased externally – and taxed. Towards the end of the 15th century, bottom-fermented beer was already brewed, and the use of hops in beer production had already caught on.

Particularly worthy of mention is the arising of the numerous breweries and the variety of beers up to the 17th century. The Sudhaus of the Bürgerspital alone produced six different beers.

With the displacement of the city limits from the Ring to the Gürtel, the city was also gastronomically expanded in the ensuing decades. Up to the beginning of the 19th century there arose numerous new breweries with beer halls and beer gardens in Neulerchenfeld, Ottakring and Fünfhaus, outside of the Gürtel, since this was the consumption tax line. The “high time” of Viennese beer had arrived.

Visitors and tourists to Vienna mostly have fixed points on their agendas: Schönbrunn Palace, St. Stephan’s Cathedral, the Riesenrad (Giant Ferris Wheel), Hofburg Palace and the “Heurigen” (wine taverns), where you (presumably) meet “genuine” Viennese people. Around 1840, things looked quite different: Back then, people advised “foreigners, or any man who doubted the convivial harmony, the respectable joviality and the honest good-naturedness of the Viennese to frequent the beer hall, and he will be convinced of the peculiarity of our countrymen” (quote from the Biedermeier newspaper “Der Wanderer im Gebiete der Kunst und Wissenschaft, Industrie und Gewerbe, Theater und Geselligkeit” [“The Wayfarer in the Area of Art and Science, Industry and Commerce, Theater and Conviviality”] – from A la Carte Bookazine).

“Denglers Bierhalle” (Dengler’s Beer Hall) in Fünfhaus (Vienna’s 15th District), in which Joseph Lanner and Johann Strauss, among others, performed music with their bands, was a popular destination and meeting place for the Viennese at that time. The beer served there came from the establishment’s own brewery by Johann Fritz Dengler, who managed the brewery that was located near today’s Westbahnhof. 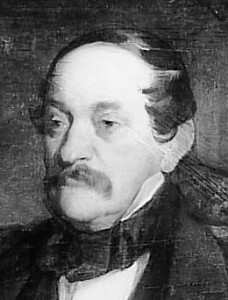 The years around 1840 are considered a time of upheaval in Viennese gastronomy and brewing. The invention of lager beer by Anton Dreher is considered the hour of birth of genuine Viennese beer. The young man was a brewery owner in Klein-Schwechat and in 1841 he brought the aforementioned “Viennese lager” to the market – and thereby revolutionized the world of beer drinking. The establishment of large cellars, which enabled the long, cold after-ripening of the beer also during the summer, the establishment of modern malthouses for even kiln-drying of barley grain, as well as the targeted controlling of fermentation and maturation temperature of the beer, were the best prerequisites for brewing light-colored, amber-colored and clear beer.

At first, competitors smirked at the “new” beer, yet with the increasing population of Vienna (from approximately 470,000 around 1840 to about 2 million around 1910) and advancing industrialization – also in beer production – beer (“barley juice”) became an affordable consumer product whose price remained stable over many years. This was in stark contrast to Viennese wine, in which grape diseases and pests caused harvest deficiencies, which in turn caused the price to rise considerably. Beer became the drink of the people.

New people – new preferences: In place of the fictile (earth and clay) beer mug, industrially produced beer glasses spread more and more. People could suddenly see what beer looked like. The lighter and clearer the beer was in color, the more popular it was. A certain Josef Groll, who could brew even lighter-colored beers than Dreher, built upon this trend with his “Pilsner Urquell.” His beers, also in the Schwechater brewery, caught on compared to Dreher’s amber-colored lager. Today, we know the golden yellow variations as “Helles,” “Märzen” or “Spezial.” 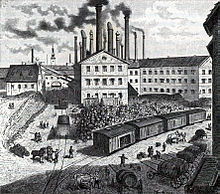 Austria became one of the most important beer exporting countries. It was also Austrian brewers who scored major successes at the Paris World Fair in 1867. Ultimately, Austria became a beer country.

The small brewhouses could not withstand the pressure. Even the Dengler brewery in Fünfhaus was forced to close its doors. In 1873, the last half-liter of beer was poured. Even the musical evenings with Lanner and Strauss, and even the distinguished New Year’s concerts which were performed in the beer hall, were unable to turn things around.

A near standstill and a rebirth

The two world wars, with their shortage of raw materials, understandably did not have a beneficial effect on the variety of Viennese breweries, and even the larger operations survived the war in rather poor shape. In the 1960s and 1970s, many breweries merged into major operations – which does not always go hand in hand with an increase in quality.

In the last 20 years, however, an upturn can once again be felt, with many small breweries, newcomers and enthusiasts having contributed to improving the reputation of beer in Vienna once again and to advancing it to the “upper gourmet class.”

In Part 2, read about today’s major breweries and Vienna’s small, fine beer producers, and find tips for where you can buy beers from all over the world in Vienna.