The History of Hotel Stefanie – Part 2

Vienna’s 2nd District, Leopoldstadt, is a melting pot of cultures, and Hotel Stefanie a conglomerate of culinary variety.

In the “History of Hotel Stefanie – Part 1” I told you all about Hotel Stefanie’s transport connections, which have always been good. It’s evident that people from all different cultures have stayed here and brought the occasional delicacy with them.

Leopoldstadt, Vienna’s 2nd District which today is home to the Hotel Stefanie, forms the city’s gateway for peddlers and merchandise dealers. Many travelers passing through the city from all over the world have sought food and lodging here in front of the city limits at the time. Immigrants from all over the empire have also settled here.

The guests of the White Rose

For the Austrian Reichstag (National Diet) of 1848, 383 representatives traveled from the crown lands. Two of the deputies stayed at the Weisse Rose (White Rose).

During the Habsburgs’ long rule, a colorful mixture of languages and cultures came about, one that could also be found in the Hotel Stefanie, at the time called the “Weisse Rose” (White Rose). Until the end of the First World War, the Danube monarchy formed the second-largest multiethnic state on the European continent. German, Hungarian, Bohemian, Polish, Italian and Slovenian were all spoken in the monarchy.

And – have you already guessed? The people brought all sorts of culinary riches with them and founded the classics of today’s Viennese cuisine. Goulash came from Hungary, Palatschinken (thin pancakes) from Romania. According to legend, Wiener Schnitzel was brought to Vienna from Italy by field marshal Radetzky.

We have female cooks from Bohemia primarily to thank for Viennese cakes and pastries. At the time, immigrants from Bohemia and Moravia made up a majority of Viennese service personnel. A female “Bohemian cook” was represented in practically every upper middle class household. At the Hotel Stefanie in 1857, two maidservants from Bohemia and a cook from Hungary were employed. 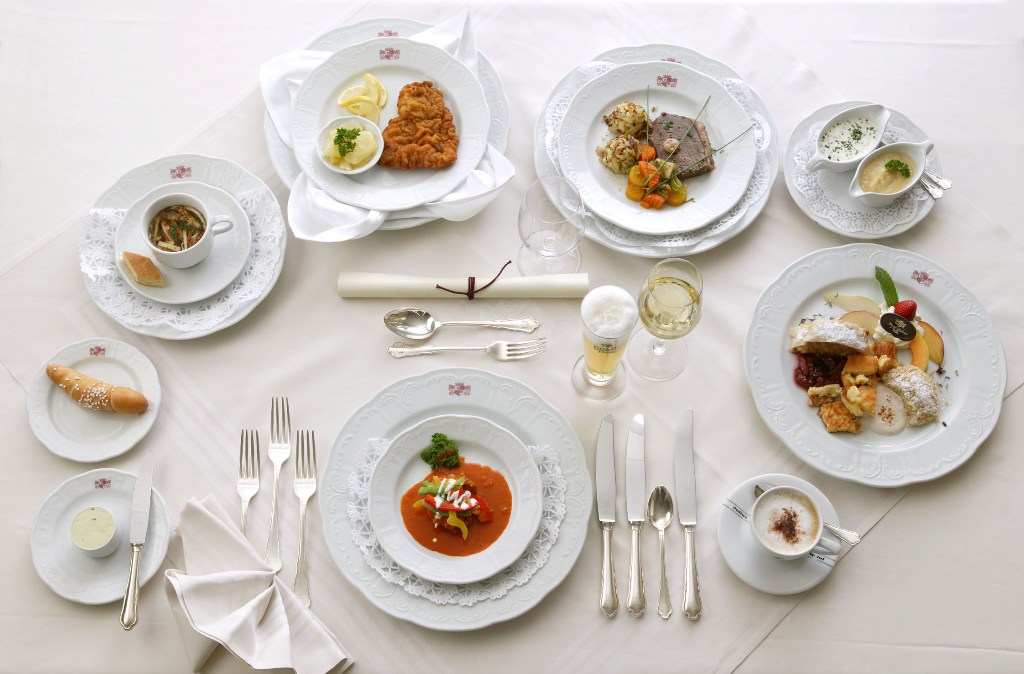 A taste of Imperial Vienna

Our restaurant Stefanie is also committed to Viennese cuisine through and through. With “A tast of Imperial Vienna” (“Alt-Wiener Schmankerl-Reise”), you’ll take a culinary trip through the crown lands. Through seven courses, each paired with a corresponding drink, you’ll experience more stories about the famous Viennese classics.