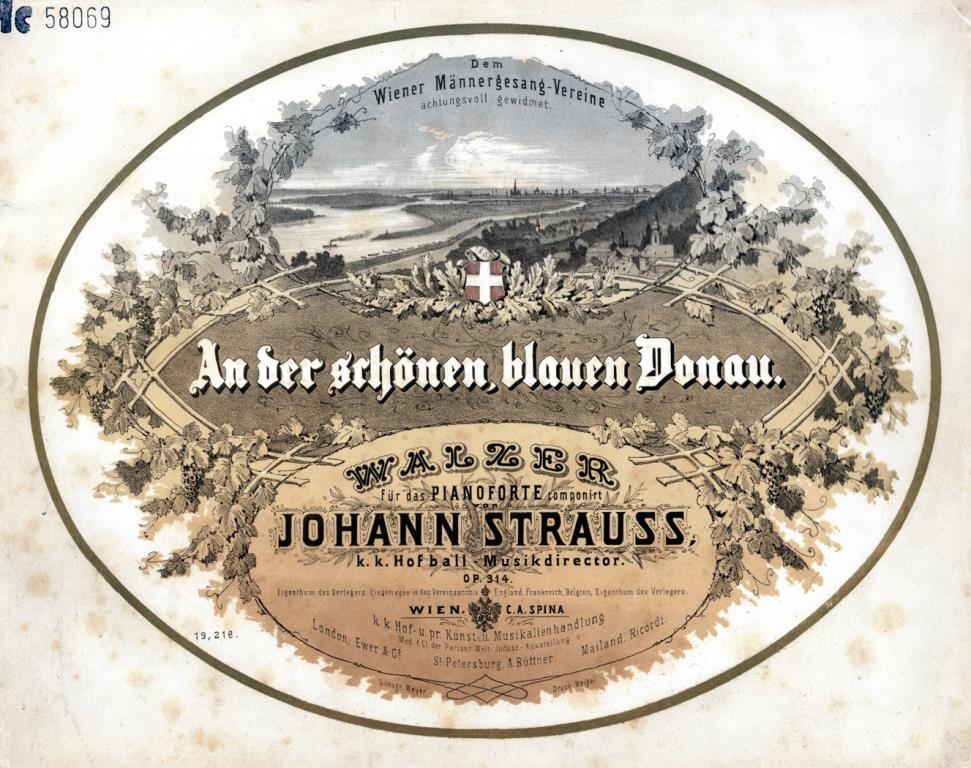 Can you even imagine a New Year’s Eve party without the “Blue Danube” Waltz at midnight? Or the New Year’s Concert? How about one of the many balls in Vienna and throughout Austria and the whole world? Without “Danube so blue…” carnival in Vienna would not be complete. The “hit” by Johann Strauss, Jr. celebrates its 150th birthday today, February 15, 2017… reason enough to examine its origins – and perhaps to dance a waltz to celebrate the day. 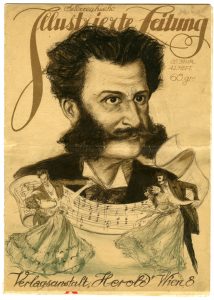 Johann Strauss was invited by the Wiener Männergesang-Verein (Vienna Men’s Singing Association – a choir founded in 1843 still in existence today) to participate in a summer singing society performance in Vienna’s 13th District, Hietzing, in July of 1865. As his commitments at the court of the czar did not permit him to participate, he promised a composition for 1866.

In 1866, Strauss was reminded of his public promise. They agreed that for the 1867 summer singing society performance, which the Männergesang-Verein substituted for its traditional fancy dress party, a waltz should be composed. Strauss lived up to the promise, made in 1865, with the waltz “On the Beautiful Blue Danube.” He devised two versions – an orchestral version and a version for male choir and piano as a choral waltz.

An international hit is born

The world premiere took place on February 15, 1867 in – wait for it – an indoor swimming pool that was repurposed as a ballroom. The “Dianabad” in Vienna’s 2nd District was a modern swimming pool at the time. Unique in Europe, the covered swimming pool could be converted into a ballroom during winter. It was here that the waltz “On the Beautiful Blue Danube” was presented to the public in its choral version.

However, the Männergesang-Verein did not sing: “Danube so blue, so beautiful and blue…” but rather the first text, written by Josef Weyl, deputy police commissioner for the “Wiener Bänkel” genre and poet for the Männergesangverein. Here is the text:

The orchestral version of the waltz was premiered shortly thereafter, in the Vienna Volksgarten on March 10, 1867, as Opus 314.

It was not for another 23 years that Dr. Franz von Gerneth (Higher Regional Court councilor) penned the following text:

“Danube so blue, through vale and field
you flow so calmly, our Vienna greets you,
your silver stream through all the lands
you merry the heart on your beautiful shores….”

Contrary to some claims, in nearly all Strauss biographies it is beyond doubt that the “Blue Danube” Waltz was celebrated from the very beginning. The “Neue Fremdenblatt” newspaper wrote on February 17, 1867: “The opening number of the second part was a decisive hit [Schlager]” – the first documented use of the German word “Schlager” (“schlagen” also means “to hit”). After the performance, the Männergesang-Verein gave Johann Strauss a golden ducat as an “honorarium.”

Popular then and now

The music critic Eduard Hanslick described the “Blue Danube” Waltz in 1874 as a “Marseillaise for peace.” Upon the first performance of Gerneth’s text, the press wrote: “It is pleasing that the anthem of the city of Vienna, long since also popular outside of Austria and even across the ocean, has at last been set to a worthy text.”

On April 29, 1945, the independence of Austria was proclaimed. Since for this great occasion there was no national anthem, Parliament began singing the “Blue Danube” Waltz. Johann Strauss’s hit was even played for the first games of the Austrian national football (soccer) team after the Second World War. Today, too, along with the “Radetzky” March, the modern song “I Am from Austria” and several other songs, it is considered the unofficial national anthem of Austria – which couples have joyfully waltzed to for 150 years. 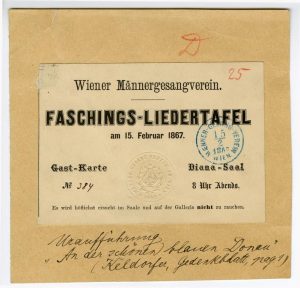 Through May 12, 2017
Monday through Thursday, from 9:00 AM to 6:30 PM
Friday 9:00 AM to 4:30 PM
in the Vienna Library in Vienna’s City Hall, exhibition room
Vienna Rathaus (City Hall), entrance on Felderstrasse, glass elevator or paternoster elevator, 1st floor, 1010 Vienna

Details, data and image sources © Wienbibliothek im Rathaus
With many thanks for the support.