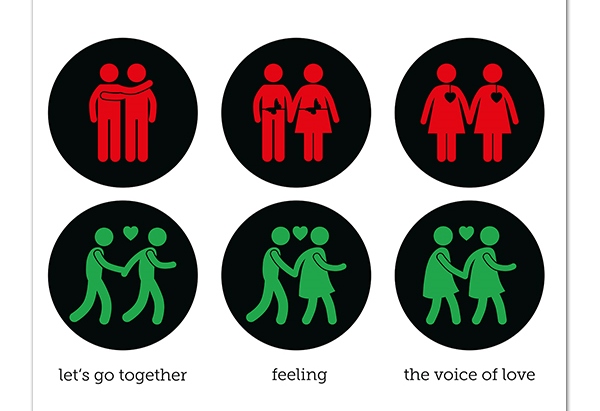 ampelpärchen.rocks – a brand as statement

You’ll find them all throughout Vienna. They tell you whether you can walk across the street or you have to wait. They are red and green and even have a name: “Let’s Get Together,” “Feeling” and “The Voice of Love.” People are talking about the traffic light couples. Have you heard of them?

For more than 100 years, traffic lights have contributed to safety on the streets. Sometimes they can be annoying, like when they’re red for too long, or chaotic, like when they stop working altogether. When the traffic light couples (“Ampelpärchen”) were installed in May 2015, they sparked a lot of discussion, ranging from unnecessary expenditure to great enthusiasm. The occasion was the Eurovision Song Contest held in Vienna in 2015, which together with the Life Ball stands for cosmopolitanism and tolerance.

And what could be more suitable than friendly couples with hearts? At Schwedenplatz, directly in front of our Hotel Capricorno, you’ll find a traffic light, and near Karlsplatz and the Naschmarkt, right near the Hotel Erzherzog Rainer, many traffic light couples will light up across from you.

The idea had its origin in New Zealand. As a thank-you for their services, such as introducing women’s suffrage in 1893, a silhouette of the New Zealand icon Kate Sheppard decorates a traffic light there. Since its introduction in 2015, the idea has also been carried on in other Austrian and international cities, and as of June 8, 2016, there is even a first-of-its-kind shop for fans, with the slogan: cosmopolitan, different, unique – like the traffic light couples.

With the brand “ampelpärchen.rocks,” the founders of Kreativpiloten GmbH, Michael Bratl and Peter Rubik, sought to create a symbol for tolerance and mutual respect. They put innumerable hours into developing their products – a great goal to have, I think. The cheerful T-shirts, coffee mugs, hoodies and more are always a cheerful idea for a nice gift or an original souvenir.

Here is the link to the online shop:
Schmalzhofgasse 8, 1060 Vienna, open Thursday/Friday/Saturday

The history of the traffic light

Did you know the first traffic light was tried out in London in 1868? It was a gas lantern with a red and a green light that was operated by the police, but it exploded after a short time. It took until 1914 for the first traffic light to regulate traffic in Cleveland. The system only came to Vienna in 1926, where a lever switch was operated manually in front of the Vienna State Opera to regulate traffic.

Where to find the Ampelpärchen