The history of Hotel Stefanie – part 8

A far-sighted hotelier – Dr. Stefan Schick forges ahead with reconstruction.

In the last blog article, you learned a bit about the ladies and gentlemen of the Witzmann-Schick family. The ancestors of today’s proprietor all contributed to the fact that the Hotel Stefanie is still in existence and has made a name for itself as Vienna’s oldest hotel. From 1947 to 1992, Dr. Stefan Schick was the driving force behind the reconstruction, which I’d like to tell you about today. 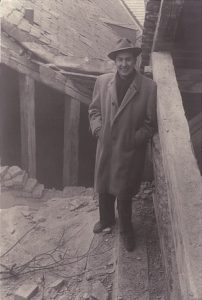 Once peace finally arrived with the withdrawal of the occupying forces, economic recovery was able to commence at the Hotel Stefanie. The building was completely renovated and updated over ten years. In addition to building the front tract on five floors, rooms immediately got their own baths. In the side tract, rooms were connected in order to offer private baths there as well.

The foyer was expanded and the ballroom elegantly equipped. The investments paid off and the Hotel Stefanie was designated Category A (nowadays First Class).

In a newspaper article from 1965, the author wrote: “The Hotel Stefanie on Taborstrasse in Vienna shines like new. Everything is new, everything is modern, shows good taste and everything is designed for the comfort of guests.” The article goes on to rave about “spick and span room doors” and “private baths,” as well as “above-average-sized rooms.”

Magic walls in the ballroom

Moreover, the “classy restaurant” was praised and a peculiarity pointed out that still exists today: two partition walls that can be lowered into the floor as needed and separate the large ballroom into three smaller rooms.

While guests continue to take their seats in the front part of the ballroom, behind the wall the buffet is arranged and subsequently the partition wall lowered into the floor – before the eyes of many astounded guests. 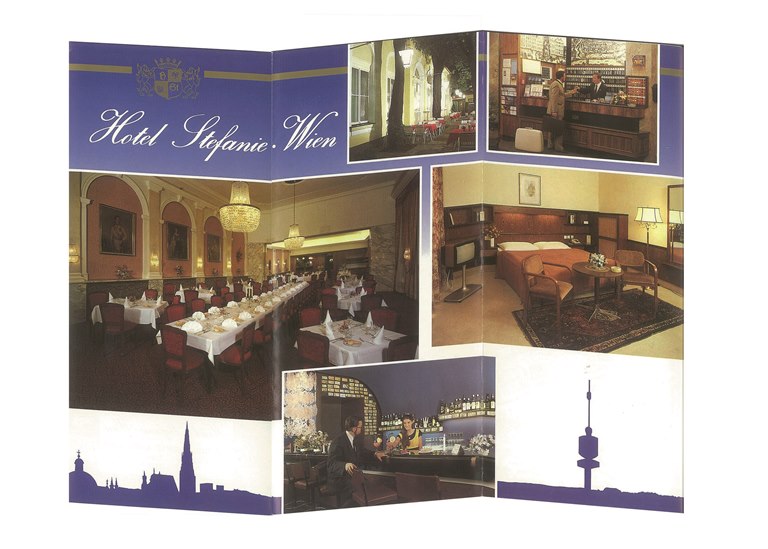 Brochure in the 80ies

In the 1970s there was a second major phase of reconstruction. The middle tract of the hotel was expanded to four floors and a modern conference hall with windows on both sides was constructed. The Hotel Stefanie was one of the first hotels in Vienna to get air conditioning! With this significant investment in the technology of a historical building, Dr. Stefan Schick demonstrated particular far-sightedness. 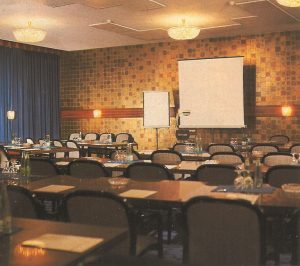 An American bar was constructed, a cocktail bar thoroughly in contemporary style. Bus tourism sprang up and also stopped at the Hotel Stefanie. For nearly twenty years, the Hotel Stefanie was also a member of the well-known marketing organization for private hotels, Best Western.

Feel the past – enjoy today’s comfort

In 1992, Dr. Martin Schick took over the Hotel Stefanie, bringing the family business into its fourth generation. He expresses his gratitude to his forebears by being very careful to retain the building’s flair, keeping its history alive, yet still offering all the comfort today’s guests desire.

And just how this history is kept alive today – I’ll reveal that in the next and final blog article on the history of the oldest hotel in Vienna.

If you’d like to read the entire history of Vienna’s oldest hotel, a book dedicated to the subject is available for purchase at the reception of the Hotel Stefanie.

The main picture showes the oldest brochure which still exists.