The Hard-Won Republic – Exhibition at the Wien Museum 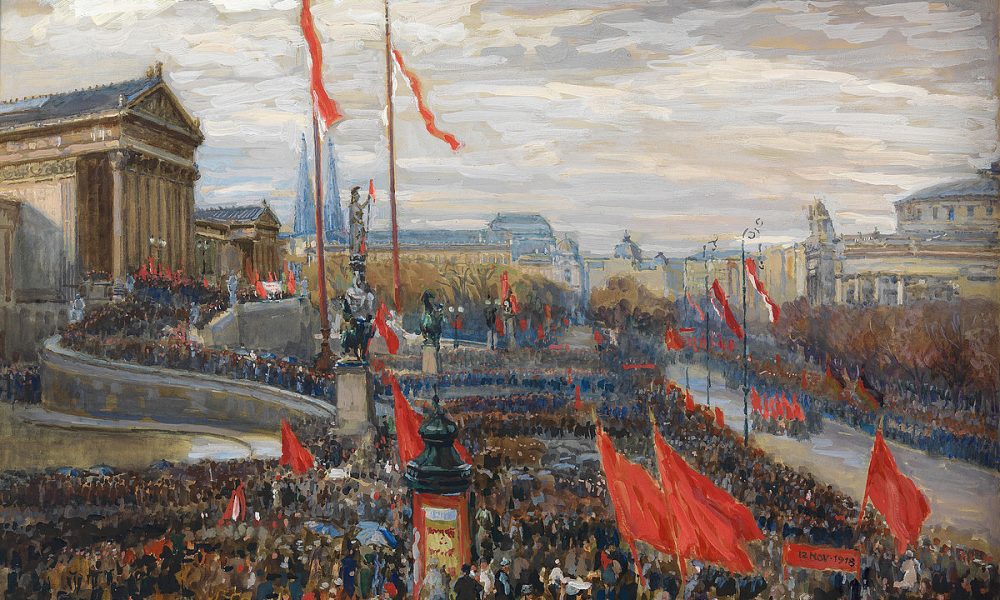 In 2018, the Republic of Austria will celebrate a very special anniversary: On November 12th, 1918, the First Republic was proclaimed (then still under the name German Austria). Over 100,000 people gathered in front of the parliament on Vienna’s Ringstrasse to witness the announcement. Several exhibitions are dedicated to the anniversary, including the interesting photo exhibition “The Hard-Won Republic” at the Wien Museum Karlsplatz focussing specifically on the years 1918 and 1919 based on the events in Vienna. Both the achievements and the misery in the first two post-war years are impressively documented.

From the Monarchy to the Republic at a Rapid Pace 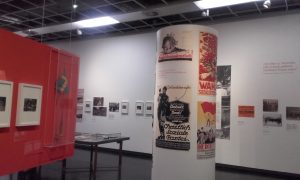 Exhibition room of The hard-won republic

The exhibition immediately shows that the people wanted to report on more than just big politics. Rather, a major focus in 1918 was on the new medium of photography and having the freedom of the press for the first time, as well as the life circumstances and perceptions of the “little” man, the simple people of that time. The last year of the war, the downfall of the Habsburg monarchy and the founding of the First Austrian Republic are recorded in numerous photographic documents, many of which are on display for the first time.

The exhibition is divided into twelve chapters and is supplemented by the impressions of various contemporaries. Journalists, writers, politicians and scientists such as Stefan Zweig, Joseph Roth and Sigmund Freud are quoted along with completely unknown people such as the brickworker Marie Toth. One can almost feel how overwhelmed and in part stunned the eyewitnesses were with the daily changes, the rapid transition and the resulting consequences.

November 12th, 1918, is considered a symbolic event that brings the complex and turbulent founding history of the Austrian Republic to a simple common denominator. The founding and anchoring of this republic is by no means to be reduced to this single day. Rather, it was a month-long process of transformation, openness and democratization that extended well into 1919 and, in part, into the 1920s. A long and hard-won Republic … Some achievements should not go unmentioned here.

Free Press: The end of the war also marked the end of the k.u.k. military and propaganda apparatus, which ruled with an iron hand during the war. Beginning in November 1918, people again ventured to speak publicly about their own opinions, to visit and organize rallies, to demonstrate, to hand out leaflets and to print newspapers – without censorship.

The photographers also appeared after years of oppression and control with new self-confidence. They documented the lost war, the returning soldiers, hunger and hardship. But they also accompanied the first steps of the young republic under Karl Renner, the election campaign during the first parliamentary election of the republic in February 1919, the first participation of women in elections, as well as the international relief supplies that came into the country. The “free press” was born.

The most printed media were those with the most photographs, such as the ” Interessante Blatt” or the “Wiener Illustrierte Zeitung”, which reached a wide audience and portrayed the street, the public space, as the preferred place of politics in 1918/19. 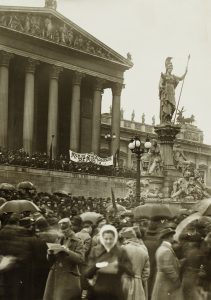 Women’s Suffrage:  “Let women vote!” This demand was already raised at social-democratic women’s meetings before the First World War, however, it was in vain.

In the wake of the political upheaval, everything went very quickly and the conservatives gave up their resistance to equality at the ballot box. The new Basic Law of the Republic, which was adopted on November 12th, 1918, also enshrined the women’s right to vote. Days later, on November 16th, the first women were admitted to the Vienna Municipal Council by co-option.

8-Hour Work Day: For the first time, an 8-hour work day was agreed to for the mines in 1889 – a huge exception at that time. As a temporary measure for factories, the 8-hour work day was introduced in 1918 under the leadership of the social politician and first Secretary of State for Social Welfare, Ferdinand Hanusch, and with the establishment of the Republic from December 1918 it was also enshrined in the law. The extra-long working days of up to 16 hours and night shifts, e.g. to increase productivity in factories, affected not only men, but also women and children in the 19th century. These burdens were now a thing of the past.

The lost war weighed heavily on the land. The people felt small and abandoned after the abolition of the crown lands. The mood among the returnees from the war oscillated between depression and readiness for revolution. Severe famine plagued Vienna, the Spanish flu, tuberculosis and other illnesses still demanded many victims after the war. Added to this was the extreme lack of coal for heat, the misery of the poor living conditions and the poor health care. Numerous international aid deliveries and child help campaigns eased the situation.

In mid-1919, the political situation in Austria had stabilized somewhat, but important developments still lay ahead: the adoption of a new constitution, the implementation of important social laws, the assembly of a new army, the fulfillment of the terms of the Paris Peace Treaty and the establishment of borderlines, just to name a few examples.

Nevertheless, in 1919 a timid hope began to spread for the first time. A hope that as we know today was smashed with the dissolution of the parliament and the founding of the Ständestaates (Corporative State) under Dollfuss in 1933 and finally with the Annexation to the German Reich in 1938 and the dissolution of Austria as a country.

My Conclusion: An exhibition that should not be missed by any Austrian with an interest in history and politics. It is contemporary history up close and personal that makes the consequences and successes that are still apparent today understandable. Very well done and highly recommended! Thank you very much! 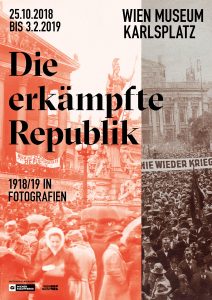 The Hard-Won Republic
1918/19 in photographs

Further exhibitions and more about the commemorative year 2018 and the topic “100 years of the First Republic”:

“Photo/Politics/Austria” in the mumok, until February 3rd, 2019

“Aufbruch ins Ungewisse” (Into the Unknown) in the neuen Haus der Geschichte (opening on November 10th, 2018)

“Bruch und Kontinuität: Das Schicksal des habsburgischen Erbes nach 1918” (Rupture and continuity: the fate of the Habsburg inheritance after 1918)
in the Hofmobiliendepot, from December 5th to 30th, 2018. June 2019

“Die Stadt ohne Juden” (The City without Jews) at the Metro Kinokulturhaus, until 30th Dec. 2018

Data and image sources: © Wien Museum Karlsplatz.
Thanks for the kind support. 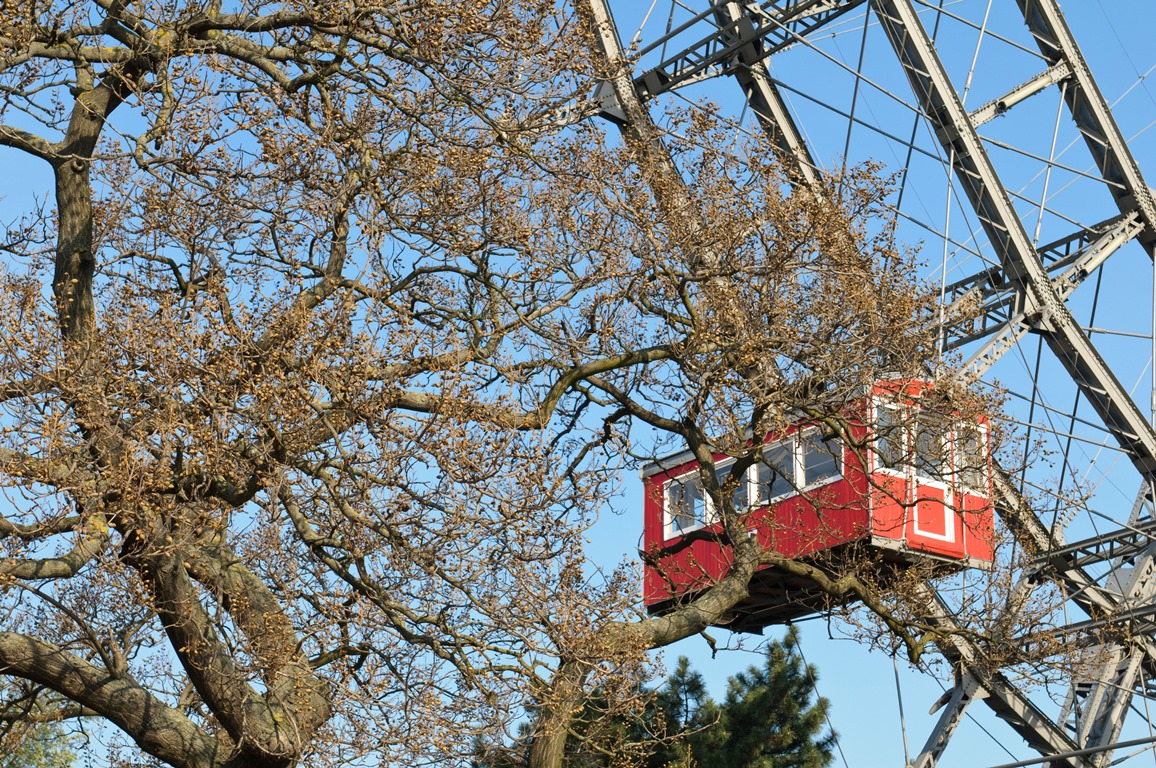