The 2011 meritus has been awarded!

The 2011 meritus corporate prize for diversity management in business was awarded on 20 October 2011 during a celebratory gala evening in the Sky Lounge of the Austrian Economic Chamber.

This prize is geared towards companies and NGOs that incorporate the topic of sexual orientation into their diversity management. In her opening speech, Brigitte Jank, president of the Vienna Economic Chamber and sponsor of the prize, pointed out the different lifestyles and the problems that can arise in work life. Eva S. Götz, president of Queer Business Women (QBW) and Markus Knopp, president of austrian gay professionals (AGPRO), shared this opinion.

Rudolf Hundstorfer, federal minister of Labour, Social Affairs and Consumer Protection, awarded the prize in the small and medium-sized enterprises category to the association Eltern für Kinder Österreich (Parents for Children Austria). This association, with 241 employees, specifies a goal of equality for all people, regardless of their ethnic background, religion, etc., in its principles. For years, this association has campaigned for same-sex couples inVienna to be eligible for foster parenthood.

In the large enterprises category, the 2011 meritus was awarded to two companies. The vice president of the Austrian Economic Chamber, Martha Schulz, presented the prize to BankAustria, which has initiated a “Rainbow Unit” among other initiatives in order to give employees the possibility of referring to a competent team for personal matters or problems. These principles are recorded in Bank Austria’s “Integrity Charter.”

Member of the Vienna Parliament and of the municipal council, councilwoman NurtenYolmaz, presented the prize to TNT Express. 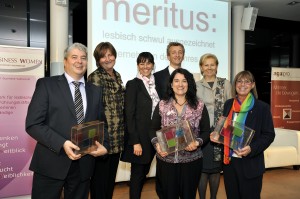 Between the award presentations, there was a round of discussion with TanjaOppitz, CEO of IBM Austria, Franz Josef Lackinger, president of the bfi  Vocational Training Institute Vienna and Dr. Roswitha Hofmann, social scientist and economist.