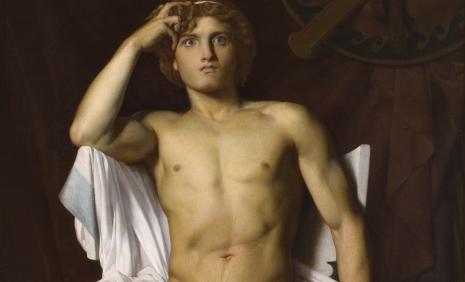 While strolling through downtown Vienna recently, a poster sparked my interest and provoked my curiosity to stop and take a look. Various exhibitions were advertised on it. Among them were, in addition to classical subjects of painting and sculpture,  those of photography and the new media of youth art.

One exhibition that especially captured my interest and that I definitely don’t wish to miss is in the Leopoldmuseum and can be viewed from October 19, 2012 through January 28, 2013. Aunt Jolesch in Friedrich Torberg’s book The Decline of the West in Anecdotes jumped out at me. In it, the author has the old, congenial lady utter a saying that has remained to this day: “Anything  more beautiful about a man compared to an ape is a luxury.” You’ll invariably ask what these have to do with one another.

Dr. Tobias Natter, director of the Leopoldmuseum, takes a look at “Naked Man in Art,” which continues to be viewed as a societal contradiction in terms – for some people act as though for “real” men, appearance were irrelevant. The museum director compiled exhibition items and those on loan, which have different artistic approaches to the motive of nudity, which had previously been reserved for unclothed women. The focal points of the exhibition are the epochs of Enlightenment, Classical Modernism and post-1945 art. A prologue of five sculptures forms the beginning of the exhibition, which encompasses the period of 2400 BCE to the present day.

The Albertina has likewise dedicated itself to the motive of “body” through December 2, 2012. The exhibition shows “The Body as Protest,” realized photographically. Works by John Coplans are comparatively staged with those by Robert Mapplethorpe, Miyako Ishiuchi, Hannah Wilke, Ketty La Rocca, Hannah Villiger, Vito Acconci and Bruce Nauman. – See also our blog entry of September 13, 2012 – 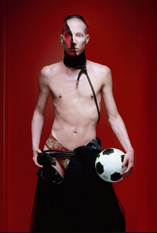 The “body and art” trilogy will be continued in the Künstlerhaus k/haus, youth and art; Megacool 4.0 through October 7, 2012. The focal points of the exhibition are the manifold youth cultures in the mirror of international contemporary art. Creative youth  show the various types and the media they make use of. Web 2.0 applications are often considered an inspiration for them and are used for testing new design possibilities. Megacool 4.0 shows fundamentally different perspectives on their body poses, fashion, objects and their movement.

Dear reader, I’m convinced that a rainy fall or winter day in Vienna can turn into a genuine highlight with this exciting and  interesting “tour” of the subject of “the body in art.”