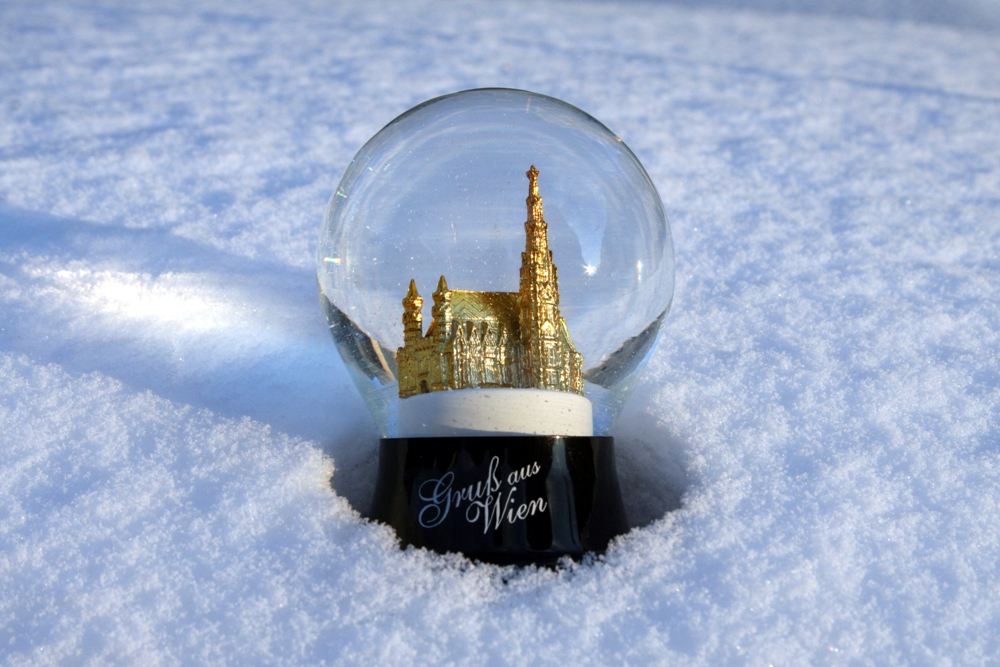 Did you know that snow globes are Viennese? And that with a snowy St. Stephan’s Cathedral or Riesenrad (Giant Ferris Wheel), you’ve decided on a genuinely traditional souvenir from Vienna? There is a large selection to be seen and also purchased directly in the Schneekugelmanufaktur & Schneekugelmuseum (Snow Globe Manufacturer & Museum), in addition to the many souvenir shops (watch out for imported snow globes).

In the Schneekugelmanufaktur (Vienna Snow Globe factory), located in one of the old suburban buildings in Hernals, one of the city’s outer districts, around 200,000 snow globes are manufactured each year and sent to customers throughout the world, especially America and Japan. 10–15 people are employed depending on the season, and each motive is handcrafted and hand-painted; only the glass balls are purchased externally.

How it all began

Actually, Erwin Perzy I, a surgical instrument maker, simply wanted to improve the luminosity of the electric light bulb for lighting in operating rooms more than 110 years ago. He added glass “flitter” to the water in a shoemaker’s globe in order to get more reflections. Although the experiment did not work, it gave birth to the snow globe.

The flitter, which reminded him of snowfall, sank too quickly, however. He therefore tried it with semolina from his mother’s kitchen, placed a miniature Mariazell Church in the globe and then placed the globe on a base.

The semolina was later replaced by ground rice. Today, the snow mixture is a trade secret that is only passed on to the next generation when it takes over operations.
The figures are made of plastic, and Viennese mountain spring tap water is used for the water. When Erwin Perzy sought to relocate his company’s headquarters “across the Danube” for space reasons, he first tested the water and was surprised that it didn’t work there. The snow fell differently.

For the sake of honesty, it must be mentioned that the oldest historically known snow globe was introduced in 1878 at the Paris World Fair. A precursor to it can be found as early as the year 1572 – a glass ball filled with birds swimming in water. Erwin Perzy did reinvent the snow globe in a sense, patented it, and the company has had great success with it to this day.

In the 1920s, snow globes were produced with diameters of 20, 40 and 60 mm. Afterwards, manufacturers experimented with the size and in 1977 snow globes were even expanded to 120 mm. Today, the two bestsellers are 25 mm and 80 mm in diameter.

Only after the Second World War did the family begin to introduce motives other than the church, beginning with a Christmas tree, Santa Claus and a snowman to launch its export to the USA.
Today, there are 350 motives in its standard program. Altogether, there are thousands, and Erwin Perzy III and his daughter Sabine never run out of ideas. She is responsible for the 2013 bestseller: the snow globes with Schwedenbombe as homage to the dessert manufacturer that went bankrupt, initiated by a founder of the group “Save the Schwedenbombe.”

Stories around the globe

Emperor Franz Joseph I took pleasure in the snow globes and honored the entrepreneur in 1908.

One snow globe with an imperial penguin became an outright cult object. For the television show Wir sind Kaiser (We Are Emperors), a throne was to be made on which the Austrian cabaret artist Robert Palfrader sits. As it failed to work out for reasons of space – the head would no longer have fit inside the globe – the suggestion to use an “imperial penguin” was implemented. And yes, this is available for purchase!

I’d like to mention a few highlights out of many special commissions:

Since 2002, a Snow Globe Museum has been located at Schumanngasse 87, directly next to the factory. In it, you won’t get to see the very first snow globe since it has long been lost, but the founder’s workbench and an approximately 90-year-old snow globe can be seen in addition to many other curiosities.

Museum and shop opening hours:
Mon–Thu anytime from 9 AM – 3 PM for individual visitors
Groups of 10–30 persons: please reserve in advance