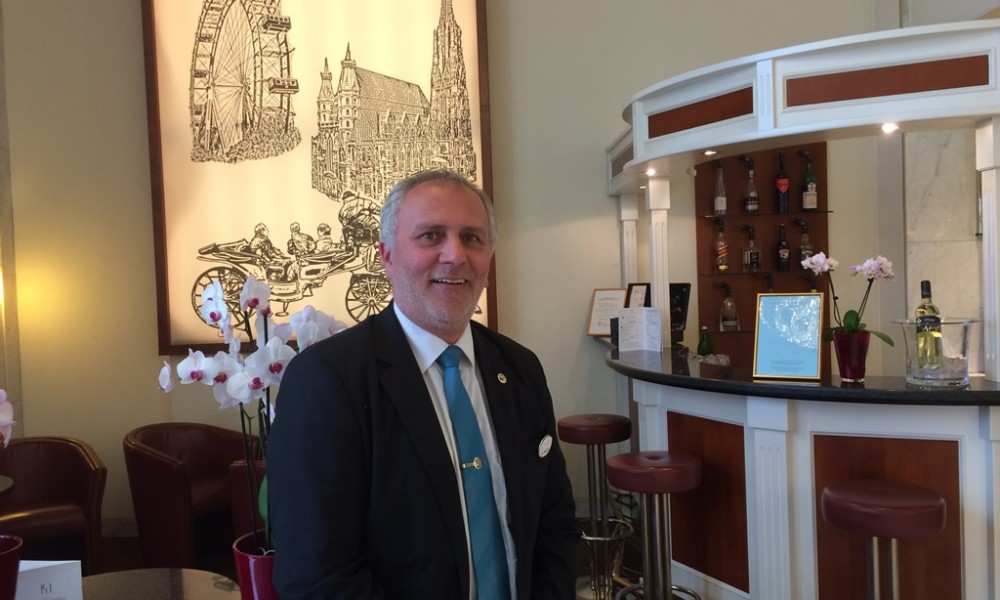 In search of the best tips for your Vienna vacation, this time I consulted a colleague from our Hotel City Central. Rainald M. Egerth has been Resident Manager at the Hotel City Central for 10 years already. He started at Schick Hotels in 1983, when, as a porter at Hotel Capricorno he discovered his love of the profession at the reception and contact with guests, which remains for him the most important thing in his profession to this day. “If I didn’t work at the reception something would be missing for me. Getting direct feedback from the guests is tremendously important,” the self-described “passionate concierge” said. 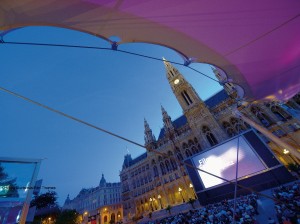 Even if it’s packed on mild summer evenings, the Music Film Festival at Rathausplatz is a must for Mr. Egerth! The great atmosphere between City Hall and the Burgtheater is unique. Starting at sunset (around 9:00 PM), top opera, operetta, concert, ballet, as well as contemporary dance, pop and jazz concerts are shown on a 300 m2 screen. There’s nearly a “Heurigen” (Viennese wine tavern) atmosphere – once you’ve gotten hold of a table you can try a large selection of international foods and drinks that are offered all around Rathausplatz.

Even if the grand theaters are closed during the summer, Rainald M. Egerth has several tips for you: “In the Schönbrunn Schlosstheater [Palace Theater], Die Fledermaus will be performed from August 8 through 30, and the Marionettentheater (Puppet Theater) is also open. Here I would go see The Magic Flute for adults.”

He also recommends a visit to the Vienna Lustspielhaus (comedy club), a mobile “Baroque” theater located at Am Hof in downtown Vienna through August 29. This year, “Hamlet oder Was ist hier die Frage?” (“Hamlet or What’s the Question?”) is being performed in Viennese dialect. “Shakespeare goes Nestroy,” so to speak.

The University of Vienna’s 650th anniversary

The University of Vienna is celebrating its 650th anniversary – just one reason to take a tour through the beautiful main building of the University of Vienna that is well worth seeing (tours are offered on Thursdays and Saturdays). Klimt even immortalized himself with ceiling paintings in the staircase of the university, as did other artists.

Incidentally, the new University of Mathematics, located at Schottenring, offers a tremendous view. The cafeteria on the 16th floor is freely accessible and offers insight into the beautiful Rossauer-Kaserne building next door and the Donaukanal (Danube Channel).

“Really, it’s quite simple. You go to the Badeschiff, which is permanently anchored in the Donaukanal just a 2-minute walk from the Hotel City Central, and there you can rent a bathing suit,” Mr. Egerth said. “I’ve already had guests who did exactly that and were really enthusiastic about it!” Should you not happen to have a bathing suit with you – it’s not really necessary if you’re vacationing in a city – this can “save” you on a hot day.

By the way, you can also rent a bathing suit at the Dianabad – also just two minutes away.

Chilling in the evening

On summer evenings, there’s a large selection of cool hangouts, especially if you’re coming from the Hotel City Central since it’s located so close to the Donaukanal. “If I had more time in the evenings,” said the father of two small children, smiling, “I’d go to the café Motto am Fluss. Prices are somewhat upscale but they’re commensurate with the quality. Or I’d go to the Tel Aviv just past the Salztorbrücke, also along the Donaukanal, where Jewish dishes are served and you can wind down the summer evening magnificently with live music and a cocktail.”