A Visit to the United Nations

International diplomacy between the Old and New Danube

The Vienna International Centre (VIC), or “Uno City” as we call it, houses the offices of many of the United Nations’ organizations and continuously offers tours that give visitors insight into the work of the U.N. in Vienna and throughout the world.

To get the UNO City, take the underground line U1 towards Kagran and exit at the stop named Kaisermühlen / Vienna International Centre, then go to the main entrance / Gate 1. 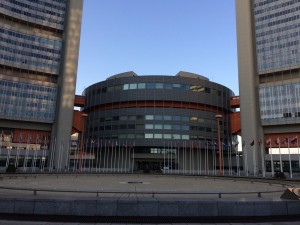 Here, you’re leaving Austria, so to speak, and you’ll first go through a security check like you do at the airport. In the visitors’ center you’ll then purchase your entry ticket and receive your visitor’s pass at another counter upon presenting a valid photo ID. Like everyone who has an appointment at UNO City, a photo will be taken and it will be recorded in a highly official manner that you were there. You can pass any waiting time with a coffee in the cafeteria or the visitors’ center.

A peek behind the scenes

The tour – in German or English – starts at the square in front of the building in front of which the flags of the member states are hoisted and several sculptures have been placed – gifts from member countries. 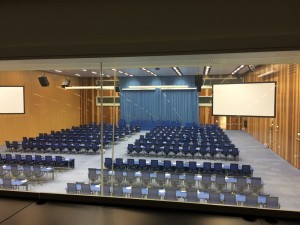 The corridor through the building’s interior is admittedly rather unspectacular – this is after all a conference and office building. Only when we walk by conference rooms with their doors open, in which nations from all over the world are working, or we stand in the audience box in one of the nine large conference halls, do we feel the flair of the great personalities of world politics.

During the tour, among other things a video is played in which locations of nuclear tests as well as their magnitude are marked in color on a map of the world. Scary. We also learn about some odd things, such as the resourceful Spanish woman who registered a property claim on the sun in 2010. I wonder whether she got cold feet!

In 1979, the Austrian government made the Vienna International Centre available to IAEA (International Atomic Energy Agency) and UNIDO (United Nations Industrial Development Organization), which had already had their offices in Vienna, for a symbolic rent of 1 Austrian schilling (0.07 euros) per year for a duration of 99 years. Additional United Nations locations were later added in New York and Geneva.

Today, the Vienna International Centre houses more than 450 offices, 9 conference halls and 3600 employees from over 100 countries.

General tours take place from Monday through Friday, always at 11:00 AM, 12:30 PM 2:00 PM and 3:30 PM. Advance registration is not necessary; however, definitely don’t forget to bring a valid photo ID.
Admission fee: 15 euros for adults, 7 euros for children. (May 2022)
For groups there is also the possibility of booking an expanded thematic tour.

Many of our guests at the Schick Hotels have appointments at VIC or participate in U.N. events and conferences. Thanks to the hotels’ locations along the U1 underground line, the VIC is just a 5-minute ride to your appointment, yet you’ll still stay right in the city center.