A Tour Through Vienna’s Galleries, Part 1 – the Albertina 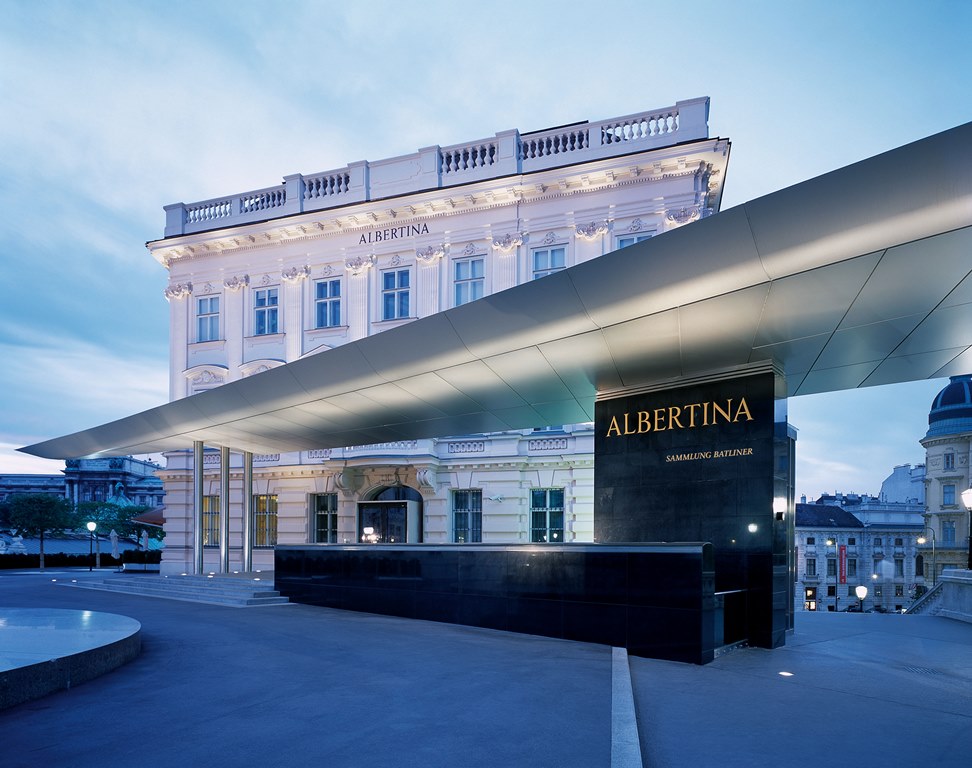 The top five paintings in the Vienna Albertina

Often enough, I admire other cultural cities for their artefact collections, yet everyone living in Vienna already has the luxury of living in a genuine artistic metropolis. My “big five” galleries in Vienna would no doubt be the Albertina, the Kunsthistorisches Museum (Museum of Art History), the Leopold Museum, the Austrian Gallery in the Belvedere Palace and the Museum of Applied Arts. I’ll start with the paintings in the Albertina, a nostalgic place for me. Every time I walk through these halls, I feel transported back to my school days – a genuine journey back in time which I’d like to take you on to view my top five paintings in the Vienna Albertina.

Art is one of my passions. During my time at school I was able to look into art actively in the art institutes that I attended. I learned exciting painting techniques early on and developed a passion for Impressionism. In addition, I was able to challenge myself time and again, such as my efforts to create works from wood, stone and ceramic.

Now, after my FLO Vintage shopping tip which I shared in a previous blog article, I’d like to introduce my top five paintings in the Albertina. 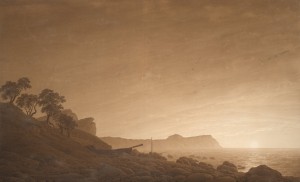 “A painting need not be invented, it should be felt.” This is a quote by Caspar David Friedrich, who also reflects this idea in his works. (Actually his original quote contains a play on words that can’t be translated from the German: “Ein Bild muss nicht erfunden [invented] sondern empfunden [felt] sein.”) His work View of Arkona with Rising Moon (1805–1806) can be found in the Worlds of Romanticism exhibition. Friedrich was a master of sepia painting, and in this special work you can recognize fine details that were achieved by means of precise color gradations.

The famous water lily motive in Claude Monet’s water lily pond paintings is fascinating in every single picture. The real attraction in these paintings is the mirrored landscape in the background, letting the viewer imagine the the water lily pond’s surroundings. People have been fascinated by the mirror images in the water’s surface for more than a century already. The Water Lily Pond (1917–1919) in the Albertina is another eye-catcher, above all for its color composition.

The Enchanted Domain (1953) by René Magritte represents pure surrealism: Reality is mixed with dreams and conventional ways of thinking are shattered. This is precisely what is represented in this painting. For me, what’s most fascinating about this image is the tree stump. One of its roots surrounds an axe and stimulates thinking about destructive action and its effects. 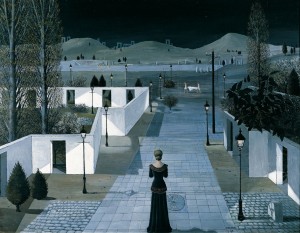 Paul Devaux’s Landscape with Lanterns (1958) is a surrealistic work, impressive in its predominant bleak mood, and its irritating symbols make you stop and take a look when you walk by. The focus of this painting is a mysterious woman, surrounded by fantastically placed lanterns and white walls. In the background are two figures with a covered stretcher and on the horizon are ruin-like constructions. The depictions in the painting have no relation to one another, yet clues to the work’s meaning are hidden in the symbolism.

… and behind it, eternity (2003-2005) by Hubert Scheibl is a minimalistic, abstract painting full of dynamics and life, whose title is programmatic. The expressiveness of the color and technique is foregrounded and forms a stark contrast from the soft color gradient to intense brushstrokes. For me, this is one of the most exciting works in the gallery – though unfortunately it is not currently on exhibit.

From the Hotel Erzherzog Rainer – my workplace – it’s not far to the Albertina. There, in addition to a classic visit to the picture gallery, you can also tour the neoclassical state rooms, which offer insight into the splendiferous world of the Habsburgs.

What is your favorite painting in the Albertina?
Have I already described it, or is it a different one?

Or maybe your favorite painting will be one of my top 5 of the Kunsthistorisches Museum’s fabulous artistic treasures the next time I introduce them.