250th Anniversary of the Vienna Prater

“Such a merry-go-round is lovely – it’s fun and doesn’t cost much!” These are the (translated) lyrics of a 1932 hit by Hermann Leopoldi and they apply to Vienna’s Prater amusement park in the best sense of the words. The fact that today, every Viennese and visitor to Vienna is able to ride the merry-go-round, bumper cars, giant Ferris wheel and ghost train, as well as eat and drink in a cozy or fine-dining atmosphere, do sports or go for a walk, or just laze around in the meadow, has its origins over 250 years ago. This anniversary is naturally a cause for celebration and for exploring the origins of the Vienna Prater.

How an imperial hunting ground turned into an amusement park

Until 1766, the Prater, with its floodplain, was an imperial hunting ground. On April 1, 1766, Emperor Joseph II opened up the area to the public, yet in the beginning only until sunset, as the gates were closed at night. As of 1775, the Prater was accessible any time of the day or night. Just one week after its opening in 1766, the first licenses for selling coffee, tea and frozen goods were issued, and visitors also enjoyed popping balloons and bowling and other leisure activities. On the Hauptallee (the main road), elegant coffee houses were established, a locale for the court, the aristocracy and the high nobility – the motto was “see and be seen.” Directly nearby, the “common” people entertained one another at the taverns and huts of the Wurstelprater, a section of the Prater that got its name from the Austrian puppet shows there (Wursteltheater and Kasperltheater, similar to the English Punch and Judy theater). There was something to see and experience for every segment of society, every age and every budget.

The World Fair and what ensued 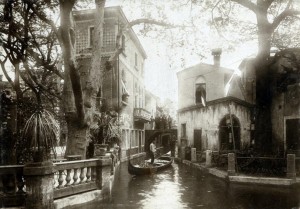 At that time, the localities and huts were simple wooden huts, and due to their location in the meadow they were often threatened by flooding. With the advent of the Vienna Danube regulation in 1870 – designed to protect regions near the river from flooding and to ease transportation by ship – wider use of the Prater was secured. It was thus that the 1873 World Fair could be held in the area – which turned out to be more of a financial disaster than a success due to poor weather, the outbreak of a cholera epidemic and an incipient economic crisis. The “Rotunda,” at the time the world’s largest domed structure, could not be torn down after the World Fair because there simply was no money to do so. It was used for exhibitions and events until it burned down in 1937.

The World Fair also helped the Wurstelprater get a facelift. The huts were arranged and numbered according to plan. Legendary entrepreneurs such as Basilio Calafati gave distinction to the Prater. He gave the Prater not only the so-called “Calafati” – the figure of a Chinese official that is copied nowadays – he also brought cinemas, circus stages and theaters to the Prater. In addition, around 1808, major traveling circuses and shows gave guest performances in Vienna, such as “Buffalo Bill’s Wild West.”

In 1895, theater producer Gabor Steiner inaugurated “Venice in Vienna”,  a “city within a city” consisting of full-sized replicas of Venetian palazzos, canals that could be traversed with genuine gondolas, restaurants and theaters. Gabor Steiner, ever in search of new attractions, is also responsible for the construction of the Riesenrad, Vienna’s giant Ferris wheel. After the 7-year lease for “Venice in Vienna” expired, everything was removed – only the Riesenrad remained. Not only did it survive the First World War, it also survived the great fire in the Prater towards the end of the Second World War, after which not much was left of the Wurstelprater except for the Riesenrad’s steel skeleton. Yet the Viennese kept their collective chins up in the Prater, too. On Whit Sunday in 1947, the Riesenrad spun around once more. 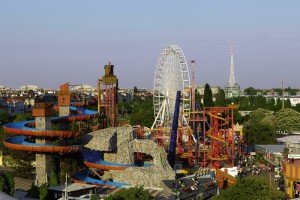 Today, the Vienna Prater is among the most popular amusement and recreational areas in the world and it has also remained unique with its very special charm. The theatrical stages and cinemas have been replaced by roller coasters and other action-filled spectacles, yet you can still feel and experience the “old” Prater: The ghost train, the Riesenrad and the merry-go-round continue to operate, in the beer gardens you can refresh yourself with cool beer and knuckle of pork, and the “Calafati” is a popular photo subject.

Not to be forgotten, the green Prater is a giant oasis directly near the city center, a nearby recreational area for anyone seeking peace and calm, and a paradise for runners, cyclists, walkers and others active in sports. 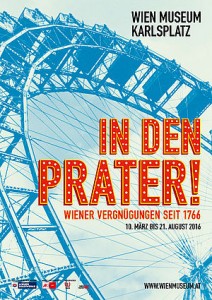 There are numerous events and exhibitions for the 250th anniversary of the Vienna Prater – here are some tips:

The big exhibition at Wien Museum at Karlsplatz is highly recommended. It’s called:

Meet Me at the Prater!
Viennese Pleasures Since 1766

The 250th anniversary offers a good opportunity to focus on the varied history of the Prater, documented with numerous objects and original photos.

Open Tuesdays through Sundays, including public holidays, from 10:00 AM to 6:00 PM every day.

Children and young adults under 19 years of age – free admission!

Free admission for all visitors the first Sunday of every month!

The Wien Museum has a large collection of materials on the Prater. Part of this collection is on permanent exhibit at the Pratermuseum in the Planetarium. The exhibition is simultaneously an invitation to visit this lesser-known Wien Museum site.

For the exhibition, there are expanded opening hours at the Pratermuseum:
Tuesdays through Sundays, including public holidays, 10:00 AM – 1:00 PM and 2:00 PM – 6:00 PM.
Closed on public holidays that occur on a Monday.

For further details on the exhibition at the Wien Museum and Pratermuseum, click HERE.

Here is an excerpt from additional events:

The Jewish Museum Vienna offers an interesting exhibition from March 16 through September 18, 2016 at its location in the Dorotheergasse:

Entertainment in the Prater and the City: Roads to Leisure

On April 9, 2016 starting at 1:30 PM, there will be a big flower parade with classic cars, horse-drawn carriages, etc. – well worth seeing!

At “Sci-Fi Day” on June 11, 2016, Trekkies, Jedis and Klingons will have the honor of transforming the Strasse des Ersten Mai (May 1st Street) into a distant galaxy.

The birthday of Emperor Franz Joseph on August 15, 2016 will be celebrated with concerts, discounts and more.

TIP: The Schick Hotels Stefanie and City Central in der Taborstrasse are located not far from the Vienna Prater and the city center – optimal starting points for your comprehensive visit to the Prater during your next stay in Vienna!