The history of Hotel Stefanie – part 6 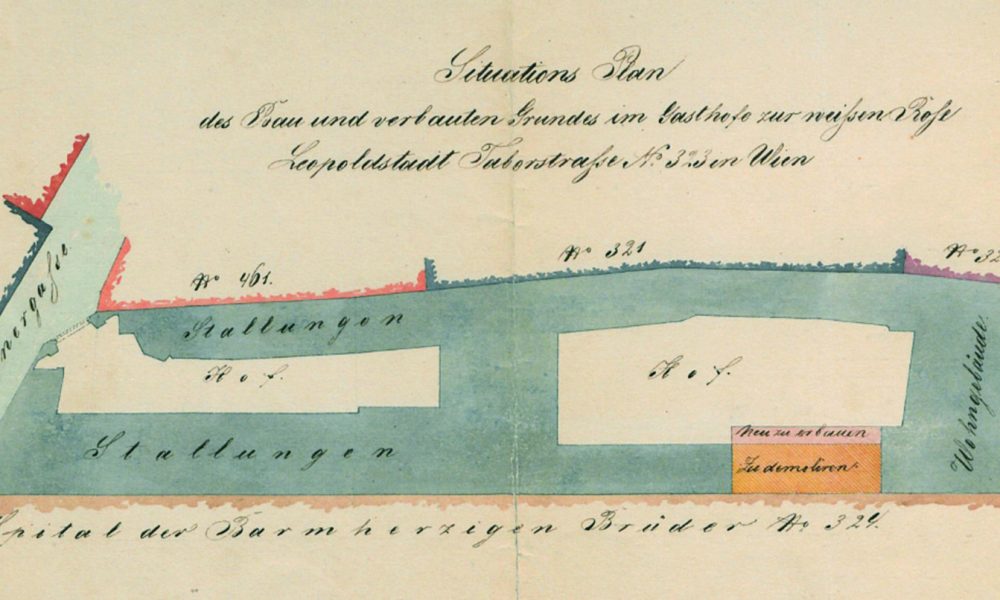 The Building at Taborstrasse 12 Through the Ages

In past blog articles, you learned a lot about the surroundings of Vienna’s oldest hotel: about the development of commerce and the population, about good and bad times. But who were the people who led the Hotel Stefanie through these times, how did the hotel grow up with these people, and when did important changes come about? In this post I’ll answer all these questions.

The Hotel Stefanie is Vienna’s oldest hotel. This isn’t just something we claim – we can prove it. Going back all the way to July 8, 1600, there are entries in the official title register for all (!) owners of the building located at Taborstrasse 12 and all (!) of them were “hosts” (hoteliers) which continues to the present day.

The building itself has been in existence for a longer time still. The first documented mention of a “building and garden” came about around the year 1430. The owner, “Hanns Haringseer and Anna, his housewife,” was a merchant, alderman, town judge and later even the mayor of Vienna (1444–1446). Unfortunately, he wasn’t a “Gastgeb[er]” (host/hotelier)… otherwise the Hotel Stefanie would be even older. 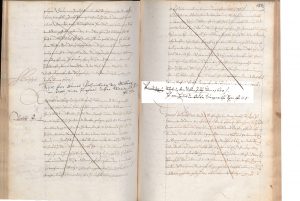 Original title register from the year 1600

It all began on July 8, 1600, with the “purchase of a building, barn and garden by Christof Freischlag and his wife Margaretha”.

Nowadays, the entries in the title register from that era make for very entertaining reading, and one can glean quite a bit about the owners’ life expectancy and their attitudes to life.

As is still customary in title registers today, already back then, when a new owner took possession of a deed, the previous owner’s name was simply crossed off.

Unfortunately only a symbol, the original is not known.

In 1779, the “Weisse Rose” (White Rose) inn was listed in the “Register of Public and Most Renowned Guesthouses and Inns, where one can stay with or without carriage”. The frequently changing owners were mentioned in the “Wiener Kommerzialschema” (Vienna Commercial Register), as was the symbol of the building’s sign – the white rose – to help orient readers.

Maintained to the present day: the typical structure of an inn

The oldest extant blueprints date to the beginning of the 19th century. The drawn-out parcels of land between Taborstraße and Grosse Mohrengasse were ideal for one-way traffic of carriages to enter and exit. The property and its layout remain unchanged to this day.

The one-floor front tract on the ground floor housed public places, tavern and market rooms, while guest rooms were located one floor above the ground floor. Feed and litter supplies for the stables were stored in the partly canopied courtyard and over the stables. At the peak of the carriage era, 90 horses could be housed in the stables. 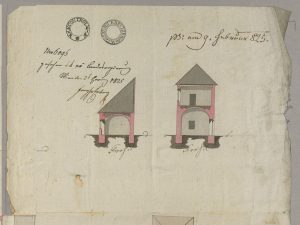 With the coming of the railway, fewer and fewer stables were required. Moreover, due to the demolition of the city walls and with it the freedom to travel, more and more guests traveled to Vienna. Gradually, the various owners built the front tract of the building to three floors (in addition to the ground floor) and, in place of the stables, also built a three-floor guest room area, a porter’s lodge and apartment, as well as a public house facing the Grosse Mohrengasse.

Building negotiations were already necessary back then. Together with their neighbor, the Convent of the Merciful Brothers, an agreement was reached in 1829 which stated that “the neighboring cloister would not be disadvantaged as long as the novitiate window does not receive less light and the gutter is constructed such that the rainwater does not drip onto the grounds of the cloister and that the moisture does not affect the walls belonging to the convent”.

When did the Weisse Rose finally become the Hotel Stefanie? You can find out in the next blog article. I hope you’ll stay tuned.

If you’d like to learn more about the history of the oldest hotel in Vienna, a book dedicated to the subject is available at the reception of the Hotel Stefanie.