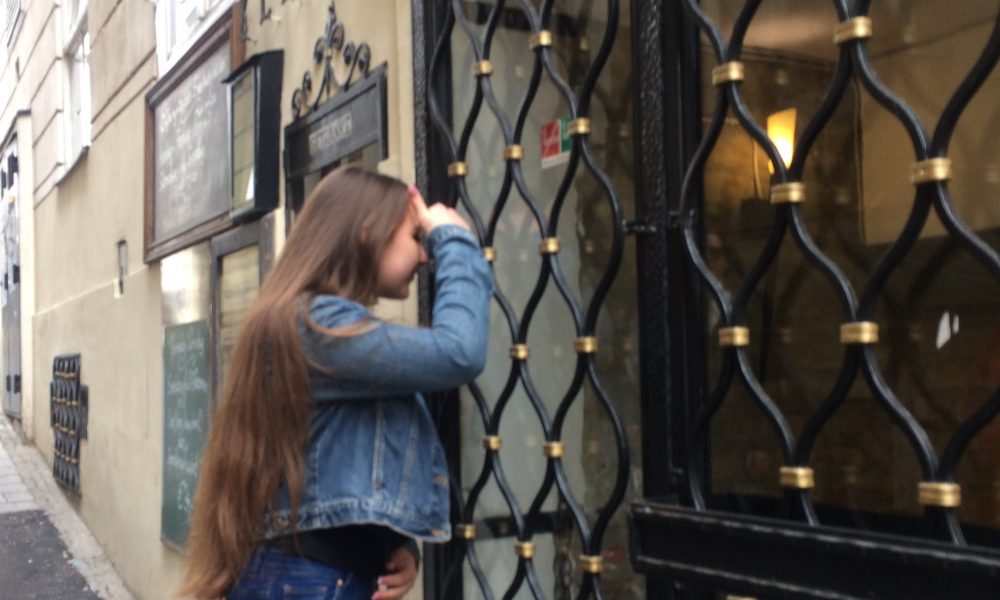 Discover the History of Vienna Right Where It Happened

Vienna, like every city, is becoming more and more modern as the years go by. However, maybe you are interested in the old buildings and deeper history? Then you will be sure to enjoy a city walk through nostalgic “Alt Wien”, or Old Vienna, even in our modern times!

Our receptionist at Hotel Stefanie, Andreas Spadt, knows (almost) everything about the history of Vienna and its contexts. He is always happy to share his knowledge with interested guests and, of course, his colleagues. Because when you work in the oldest hotel in Vienna, you are expected to be able to tell a story or two about the city’s history. But how can you help bring the people closer to it all? By taking them to the actual location! That is exactly why Mr. Spadt put together a city walk that takes people through “Old Vienna” giving insight into its rich history. 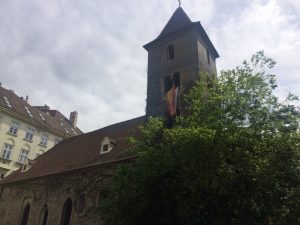 Ann-Kathrin Labschütz joined the tour and has summarized her impressions for you.

Ruprechtskirche – The Oldest Church in Vienna

The weather is good, my walking shoes are on and off we go. From Hotel Stefanie, we turn left along Taborstraße and then cross over the Schwedenbrücke bridge. At Schwedenplatz, we head right towards Altstadt and continue on to Ruprechtsplatz. Up a few steps and we are already in front of the oldest still standing church in Vienna, the Ruprechtskirche. It was founded in 740 as a Roman Catholic church. Here, we clarify a few facts, like for example what this church has to do with salt.
The Ruprechtskirche is dedicated to St. Rupert of Salzburg, the patron saint of salt merchants. At the base of the Ruprechtskirche bell tower is the Salzamt, which used to sell salt to retailers.

Next, it is a 5-minute walk from Judenplatz through the Hohen Markt to Tuchlauben. At house number 19 there is a branch of the Wien Museum. The Neidhart Ballroom houses wall paintings / frescoes from the Middle Ages. With our ticket, we receive a written description of the paintings. In 1979 it was a small sensation, when during construction work on the house they discovered the oldest non-church murals from the Middle Ages, which were created in approximately 1407. The frescoes are about forbidden love, festivals, music, food, moons etc.
Tip: Free admission on Sundays

The rest of the old city wall/Mölker Steig

From the Esterhazy Cellar to the Mölkerbastei

Following the Bognergasse, we continue to the Esterhazy Cellar on Haarhof. A historic city wine tavern whose cellar has welcomed countless tourists and local guests since 1683. During the Turkish war, they started serving wine in the Esterhazy cellar, a tradition that has continued until this day.
As the story goes, messengers were given “free wine” so they could go up against the overwhelming Turkish army full of courage and good humor.
The handmade bricks in the original vault, dating from the 15th century, are full of myths, legends and customs.

From the Esterhazy Cellar, we continue past the Burgtheater into the Teinfaltstraße, where the “Mölker Steig” stairs lead up to the Mölkerbastei. In 1531, the Schottenbastei was built as part of the Vienna city fortification. It got its name from the adjacent Schottentor/Schottenstift. More than 100 years later, it is now known as the Mölkerbastei, which can be traced back to the “Melker Hof” located behind the bastion.
To avoid any confusion: “Mölk” is dialect and actually means the city of Melk in Lower Austria.
During the occupation of Vienna by the French, the front section of the bastion was blown apart and restored a few years later.

A Special Picture in the Minoriten Church

Almost around the corner, we reach the beautiful Roman Catholic Minoriten Church on the Minoriten Platz via Wallnerstraße. Translated, it is called Maria Schnee and has been home to the Italian-speaking community of Vienna since 1748. Here, we stop to admire a mosaic copy of Leonardo da Vinci’s famous “Last Supper”. 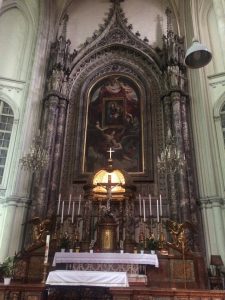 Commissioned by Napoleon, it was completed after his fall and purchased by Emperor Franz I. Since it was too big for the originally planned exhibition venue in Belvedere Palace, the picture was given to the Minoriten Chuch as an imperial gift.

At the corner of Ballhausplatz we continue on to Michaelerplatz. Michaelerplatz is a baroque star-shaped square at the center of Vienna that was designed around 1725, but only realized at the end of the 19th century. The square has borne the name since approximately 1850 and comes from the parish church of St. Michael located on the square. A number of notable buildings are grouped around Michaelerplatz. The center of the square has been marked by an archeological exhibition since 1991.

This is followed by an intensive walk via the Kohlmarkt to the Graben, where Vienna’s “Champs-Élysées” is hidden: a long shopping street on which you can find one name brand store after the other. Shortly after, we come to Stephansplatz, where we find the next destination on our walk, the Stock-im-Eisen-Platz.
The Stock-im-Eisen, or staff in iron, is the trunk of a forked spruce from the Middle Ages that is covered with hundreds of nails. Today, it is protected by a glass cover and can be viewed on the Kärntnerstraße. It is unclear why people pounded nails into trees like this one back then, but the theory is that it stems from old customs such as cutting crosses into trees for protection or thanks for healing.
After a short break, we set off on the last stretch of our walk. 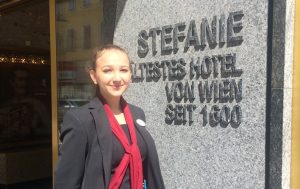 We head down the Kärntnerstraße, another of Vienna’s attractive shopping boulevards, for a good quarter of an hour all the way to Karlsplatz. The last stop of the walk is the Karlskirche or St. Charles Church. It is a Baroque Roman Catholic church from 1737. During the last major plague epidemic in Vienna, Emperor Karl VI vowed in St. Stephen’s Cathedral to build a church for his namesake St. Karl Borromeo. One of the most striking features of the church are the large columns on its sides. The side towers are reminiscent of oriental pagodas. The two high columns framing the Greek portal are partly Islamic minarets, as well as Roman columns of triumph, enhanced by the reliefs depicting scenes from the life of Karl Borromeo.
Thus, our four-hour walk through a piece of Vienna’s history comes to an end.

Ann-Kathrin Labschütz completed her apprenticeship as a hotel clerk at the reception in Hotel Stefanie. The ambitious young lady has recently written her first blog article: 24 Hours in Vienna