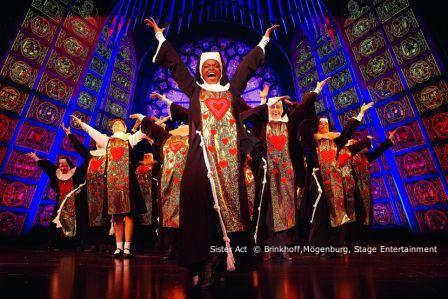 Have you ever heard a choir deliberately sing wrong? And at the time-honored Ronacher Theater at that? If you know the story of Sister Act, that won’t surprise you. Nonetheless, this scene was one of the highlights of my attending Sister Act at the Ronacher Theater.

At the latest, when the nuns first go onstage attempting to sing, they have the whole audience in stitches on their side. The different characters are perfectly cast and cause the audience to smile with a simple glance. A side note: The Monsignore character is played by Michael Schönborn, the brother of Cardinal Christoph Schönborn—perfectly fitting, wouldn’t you say?!

Meanwhile in the Ronacher Theater

Here’s a little tip for the intermission: Already before the start of the performance, you can order a glass of champagne, sandwiches and the like, and at intermission they will be ready for you at your table. No hurrying, no pushing at the bar!

If you wish to spend a lighthearted, entertaining evening at the theater, I can very warmly recommend the new musical Sister Act. I’ve rarely laughed so hard at a musical as I have at this one.

What are your favorite musicals, which have been performed inVienna in recent years? Except for major classics such as “Elisabeth”, my favorite musical has been “Jekyll & Hyde”—a split Thomas Borchert in confrontation. To me it was unforgettable.