A Ball Night in Vienna… with Swing! 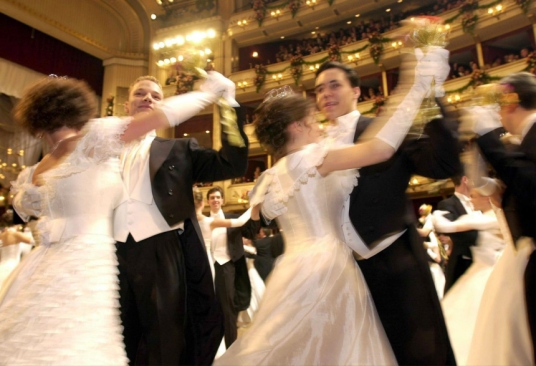 Who doesn’t know these lines from “Eliza” from My Fair Lady? Eliza undergoes a test at the Ambassador Ball (reception), which she masters with bravura, and is on cloud nine before going to bed. Now, you don’t have to pass a test in Vienna to dance the night away, which you can easily do at one of the city’s many balls. Vienna’s variety of balls ranges from the classical ball in tailcoat all the way to gschnas (costume party).

In keeping with the introductory story, you should definitely attend a ball in the imperial ambience of the Vienna Hofburg. “Pssst…” here’s a tip, just between us: It is very impressive when you ascend the magnificent staircase in a tailcoat or tuxedo (for men) and long robes or designer ball gowns (for women), and then glance at an ocean full of waves of dancers. Am I now indulging in reminiscences? So it would seem. Here, in the Vienna Hofburg Palace, the city’s largest and most famous balls take place. Of course, the Musikverein, the Vienna City Hall (Rathaus) and the Vienna State Opera, Palais Ferstl and Palais Auersperg (to name but a few) are at least as magnificent as the many other and smaller venues in the various districts.

The origin of Viennese balls extends far back into history and reached a high point during the Viennese Congress era of 1814-15. The ball tradition was made palatable to a wide audience throughout the world as the Viennese waltz spread. This beautiful Viennese tradition has been imitated throughout the entire world for many years. In addition to the original in Vienna, you can find an opera ball in New York, Hong Kong, and many other cities. This is simply great! UNESCO thought so as well and in 2010 the organization named the Viennese ball tradition an intangible cultural heritage.

I’m afraid I can’t make the decision for you as to which ball or gschnas you should attend. However, I can help you out with some ball information (in an abridged version, at the end of this article), instructions on the “Quadrille francais”—the dance at midnight that takes place at (practically) every ball, which very much challenges the ball attendees (or drives them to despair, as it does me) and causes quite a mess on the dance floor (see the following video: Quadrille)—as well as the basic waltz steps, accompanied by a couple measures of music. You can dance under the rainbow at the Rainbow Ball, the Rose Ball, the Diversity Ball, as well as the Life Ball. At all these events, diversity is both valued and required, and ticket demand is high. 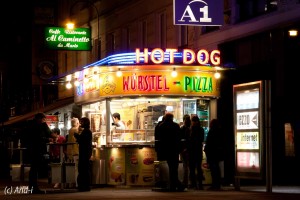 To top off a  successful ball night, visiting a Viennese sausage stand is part of the fun for the Viennese. Recalling one such incident makes me smile. One cold winter  morning, I stood at this “Würstel-Stand” in a tuxedo, with a white silk scarf  and a bit keyed up, and shared the serving area with a construction worker in, shall  we say, “professionally soiled” blue working clothes. He was just on his way to  work and was getting a bite to eat. For early bird passersby, the contrast must  have made quite an impression.

What remains to close  off a stirring ball night is hitting the sack, legs raised and perhaps even  cooled off. Your feet will thank you—since the next ball will be here before  you know it.

Wishing you lots of  fun and “Alles Walzer”… everybody waltz!