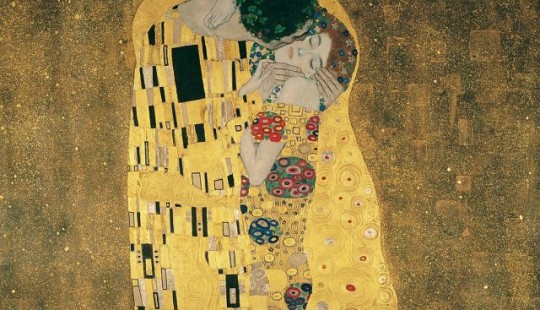 “To each time, its art, to art, freedom.” Ludwig Hewesi

2012 offers Vienna not only an opportunity to look back upon the works and impact of an artist who is undoubtedly one of the greats—it also offers the opportunity to place an era at the center of general interest, an era during which Vienna was the center of the universe. You have to imagine that at the time of Klimt, Vienna, with its population of two million, was the fifth-largest city in the world. The Danube metropolis’s importance can be gleaned from that alone…

Amongst the many highlights that 2012 will no doubt bring, it’s difficult to favor one or another exposition… and yet, although there will be many topical exhibitions to which we can excitedly look forward this year… we ought to look forward especially to the drawings from the collection of the Albertina and Wien Museum. Dr. Alice Strobl

(who died in 2010 and was known to be one of the great authorities on Klimt’s oeuvre) would surely have enormously enjoyed this exhibition, probably the most comprehensive “ever.” Throughout her entire life, she was one of the experts who ascribed Klimt’s drawings special significance amongst his output… and if you take a look at only a few sketches and the masterful production and skills of this painter—as well as draftsman—you can’t help but go into raptures and share her opinion, whether you’re an expert or not. Similar to Schiele’s drawings, they are immediately captivating, with their own flow, with their rhetoric and their expressiveness (incidentally, over 3000 drawings by Gustav Klimt have been preserved). Gustav Klimt – Romeo & Juliette Think of the study of the dead Juliette, for example, which has likewise been preserved and which was realized as a ceiling portrait for the right staircase of the Vienna Burgtheater… not realized, however, were his drafts for the auditorium of the University of Vienna, of which only sketches are extant today. He received the gold medal at the World Fair in Paris in 1900 for these works; at that time, the World Fair was like the World Cup, the Oscars and the Nobel Prize ceremony all rolled into one… and it’s all the more a wonder not only that they never came to fruition, but that their explicitness and provocativeness led to a unprecedented singular artistic scandal in the metropolis of Vienna!

The fin de siècle not only gave rise to new art, new technology, new philosophies and new politics; it was also accompanied by great societal changes. For example, it brought the end of powerful European monarchies, innumerable technological 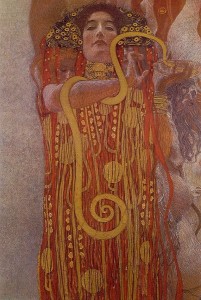 inventions and innovations; and not least of all, women in many countries fought for unprecedented freedoms such as the right to vote. The changes were so multilayered and significant that pursuing them further would be too much… yet, as we all know, they were so serious that they led to the turmoil and darkness of the First World War…

Many people, not least of all artists, henceforth saw the age of women as having arrived and patriarchal society, which had seemed unalterable up to then, as threatened to be superseded by a matriarchy… this so allegorically represented female figure as a “femme fatale” or “nuda veritas,” this all-encompassing feminine was also what needs to be seen—to return to Klimt—in Klimt’s works, for in front of the backdrop of then-current events, women were ultimately demonized and made the epitome of masculine fear and, simultaneously, ideals… as though in a frenzy, the psychological and societal mixed together to form a spectacle of artistic production… regardless of where one turned in the art of the era—whether it was to Fritz Lang’s “Metropolis,” to the opera The Woman without a Shadow (Die Frau ohne Schatten) by Strauss, or to literature, for instance, to E.T.A. Hoffmann’s “The Sandman”

or even to F. Nietzsche’s heavily condensed aphorism, “When thou goest to woman, take thy whip!”… everywhere, women were portrayed as eerie, man-eating beings. For all the beauty and radiance of Klimt’s oeuvre, we should never disregard the psychological and psychologizing aspects of his works… there is always something dark, something threatening, something unknown, something subconscious to be found in his works, even if it is not as marked as is the case with some of his contemporaries such as Oskar Kokoschka (it is not without justification that he was called the Freud of painting)… yet Klimt always holds a mirror up to the viewer’s own psyche in order to depict nothing except the ‘naked truth’.

There’s surely much to expect from the opening of Klimt’s last still-extant studio, for Klimt was hardly an extrovert but rather someone who lived and worked in seclusion… and this year we can get a unique picture of how Klimt once lived and worked. In his studio, innumerable 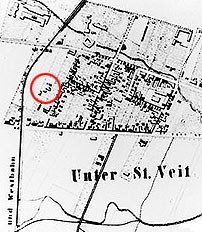 exhibition catalogs together further illuminate Klimt’s personality. With the aid of letters and postcards, you’ll probably get to know an entirely new Gustav Klimt… I’ll just mention this in advance: He must have been quite a temperamental character with a tendency towards pedantry…

Here are the highlights of the 2012 Klimt year (for his 150th birthday, so to speak) at a glance:

– Austrian Museum of Folk Life and Folk Art: Objects in Focus. The Textile Pattern Collection of Emilie Flöge: 25 May – 14 October 2012

– Museum of Applied Arts and Contemporary Art (MAK): Blueprints for the Stoclet Frieze in Brussels … and, of course:

– The Secession and its unique Beethoven Frieze

The up-to-date links for the Klimtyear 2012 you will find on this page.

1918 was not only the year Gustav Klimt, Egon Schiele, Kolo Moser and Otto Wagner died, it was also the end of an era, an era in which the gates to the modern era opened wide…