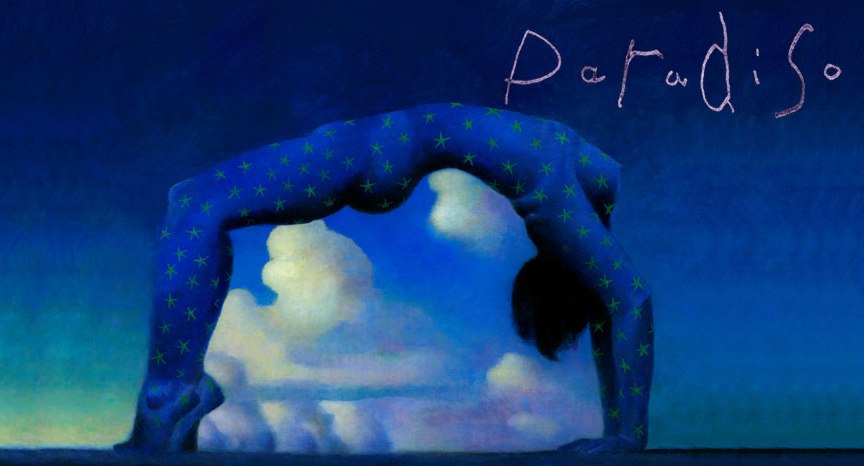 The new production for the ODEON’s 25th anniversary

The Serapions Ensemble has quite a special performance in store at the ODEON Theater – the catchword is “scenic poetry,” a stirring interplay of free theater, dance, music and text, thrillingly complemented by great costumes and painting. This combination promises a special kind of cultural experience, one which you shouldn’t miss out on.

The SERAPIONS ENSEMBLE isn’t a typical theater ensemble – they primarily express themselves using visual means, making their performances universally understandable. Free theater, dance in the broadest meaning of the term, music, text and visual arts are all combined with one another into something that could be called “scenic poetry”.

The members of the Serapions Ensemble come from different countries, have different roots and different training. Developing a member according to his or her individual possibilities and bringing his or her abilities into the ensemble render possible the complete impression and the emotional mood that are meant be transmitted to the audience.

Painting and costumes also play an important role in the Serapions Ensemble’s work. Thanks to a sophisticated system of reversible costume parts, which can be arranged differently by the actors themselves using only a few hand movements, metamorphoses on the open stage are possible. In their own way, the costumes thereby play a role in telling the story.

Out of the fusion of these visual means with music, dance and acting results the very special allure of the Serapions Ensemble works, which remain in the audience’s memory for many years.

As a child of freedom, art forms a bridge between the material and the spiritual and thereby creates a balance, an equilibrium between these poles. This makes it one of the last paradises in people’s lives. Accordingly, this paradise is neither earthly nor otherworldly, but rather for moments in time ever-present in the free arts. The new work by the Serapions Ensemble – the transformation of numbness and dullness of the material, via perception and recognition, into inspiration, into a recreation of a world in and through this interplay – tells of this process.

The ODEON – a “theatrical pearl” in Vienna’s 2nd District 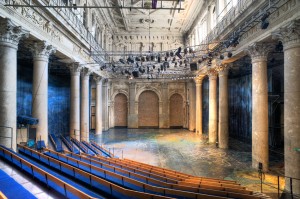 The ODEON in Vienna’s 2nd District is one of Vienna’s most beautiful theaters. It was built in the classical style of the Italian Renaissance at the end of the 19th century and was originally the large hall of the agricultural products exchange. However, the exchange was destroyed by a fire during the final days of the war in 1945 and remained unused for years. In 1988, it was ultimately adapted into an auditorium by Ulrike Kaufmann and Erwin Piplits, and since then it has been the established venue of the Serapions Ensembles, which they founded. The “ruins” character was preserved during the renovation, which among other things also contributes to the special atmosphere of the auditorium. With its columns, the auditorium is reminiscent of a temple and is constructed in the style of the “Odeion” of antiquity, which was a roofed venue for music and dance performances. For this reason the theater was named the Odeon.

The beautiful rooms of the ODEON and the agricultural products exchange, as well as its immediate proximity to the SCHICK Hotel Stefanie (Taborstrasse 12) also account for the positive collaboration that has existed for many years. The ODEON Theater is where the SCHICK Hotels present their annual “Schick Event,” to which top customers and partners are invited. Catering for all sorts of occasions has already been organized at this top location.

It was an obvious choice to reconvene for the new production of “P a R a D i S o”. To get in the right mood for the evening at the theater, the Hotel Stefanie is offering your choice of the following at the café bar Stefanie:

Theater Special – savoury “Delicacies from the water”
Smoked and pickled salmon, smoked fillet of trout and terrine, with horseradish cream and leaf salads

For “sweet tooths,” there is the:
Theater special “Sweet”
Homemade apple strudel with vanilla sauce, pétits fours and seasonal fruit mousse
EURO 10.90 per person, incl. 1 coffee or 1 tea of your choice

An extra bonus for winding down the evening is also available:
Upon presenting or handing over your admission ticket, you’ll receive a 15% rebate on drinks at the café bar Stefanie after the performance (for a maximum of 4 persons per admission ticket).

Now there’s nothing standing between you and a successful evening at the theater combining art and  the culinary arts!

For further information and to reserve tickets:

“P a R a D i S o” was freely developed by the internationally composed Serapions Ensemble under the joint direction of Ulrike Kaufmann and Erwin Piplits. Erwin Piplits introduced the idea and is responsible for the music montages. The stage design is by Ulrike and Max Kaufmann. For the design of the poster subject, the renowned New York illustrator Brad Holland could be engaged once again.

Photo credits: © Brad Holland, © ODEON – with thanks for the cooperation.