The Q202 AtelierTour will take place for the 15th time this year from 20th to 22nd April 2018. Under the theme “Kunstzeit” (“Art Time”)  around 60 studios in the 2nd and 20thdistricts open their doors and invite visitors on a journey of discovery and exchange into the realm of art.

At the end of April, time for art has come again, particularly in Vienna’s 2nd and 20th districts. For a weekend Q202 artists allow you to peek over their shoulder and invite you to their workshops. The Q202 AtelierTour gives you the opportunity to experience the artistic potential of the surrounding area in a very personal way. You will meet artists in their apartments, in shared workshops or backyard ateliers. This year even on historic Danube ships (painting/music/mixed media in Dammhaufengasse at the Buddhist Pagoda) or in the Augarten palm house (art of painting, Obere Augartenstr. 1). 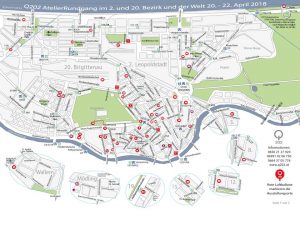 Get the current  “hiking map“ for the AtellierTour here and put together your own individual tour. Points marked red indicate open studios. In addition, varying events are on offer at locations marked with a blue border.  You have a particularly wide variety to choose from around Hotel Stefanie and Hotel City Central.

It begins with the theme “This Street is Art”, a campaign that versatile artist Hans Heisz (also organizer of the Q202 studio tour) launched in 2014, which the Schick hotels have been happy to support ever since.  We reported on it.

At 5 locations along Taborstraße artists from all areas will be exhibiting on temporary platforms, e.g. opposite  Hotel Stefanie/Hotel City Central on the corner of Gredlerstraße: Aiko K. Kurosaki – “Performance becomes Installation“.

There are 18! studios within the vicinity of a mere 10-minute walk alone. A tip: a lunch at the Stefanie restaurant or a drink at the hotel bar would always be a good idea for a breather. 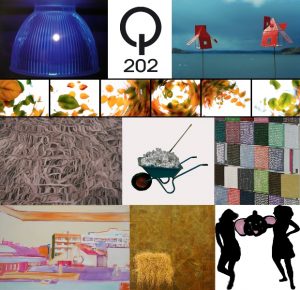 What are you offered? For example: Photography  (among others at Neglergasse on 21.4. at 6 p.m. featuring live music ), sculpting, painting, ceramics & porcelain, jewellery or textile design and much more. Various objects made of different materials will be exhibited. There will be installations as well as performance art. Thus the artists of Q202 offer a large sphere for comparison and encounters for the audience on the one hand and the artists on the other.

To make the project known beyond the boundaries of the district, studios in other districts take part in AtelierTour time and again. Contemporary art will be shown in the 3rd district, sculptures and paintings at Studio 51 in the 8th district. The KunstQuartier Meidling (12th district) will take part with eleven studios. Photography will be presented in the 15th district and sculptures and design in the 19th district.

Interesting: In 2018 there will also be satellites in Burgenland in Wallern im Seewinkel (photo realistic painting) and in Mödling in Lower Austria, where, among others, free play on 100 African drums will be offered.