“You haven’t seen Vienna unless you’ve been to Kahlenberg” 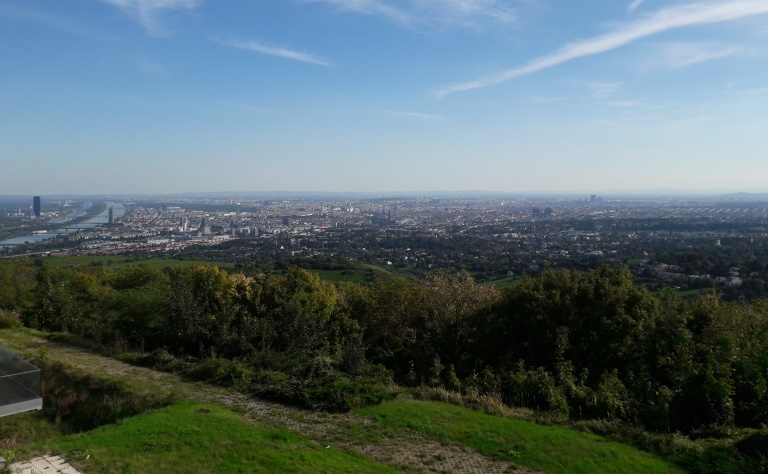 A journey up the hill on “the most beautiful bus line, the 38A”.

We Viennese are very proud of the diversity that our city has to offer. In my case, for example, it is always a pleasurable experience to travel on the bus from Heiligenstadt (the U4 underground line terminus) through Döbling up to Grinzing and onto the Kahlenberg hill.

The wine district of Grinzing, with its many wine taverns in the middle of Vienna, offers a unique, rural ambience as you drive through it. Passing by the many taverns, you catch your first glimpse of the vineyards at the back there on the slope of the Kahlenberg. A Mediterranean feeling hovers in the air. The bus leaves Grinzing in the direction of Kahlenberg and soon reaches the ‘Höhenstraße’, or ‘mountain road’.

The Höhenstraße is a scenic road which was spaciously laid out for its time. It sweeps through forests and much greenery as it veers from the 17th district via the 18th on its way to the 19th and up to the top of the Kahlenberg. The mayor of Vienna had it built in 1904 during the creation of the Viennese Forest and Green Belt with the intention of establishing a road link over Vienna’s hills. There are fantastic views of the city to be had at many points along this street.
After we have left Grinzing’s last houses behind us, the bus turns onto the generously proportioned Höhenstraße, which is characterized by good old-fashioned cobbled paving stones. The bus drives rapidly along the curving stretch through many green woods and meadows and passes by Cobenzl on its route, a stopover on the way to the Kahlenberg which is likewise blessed with breathtaking views. You get the impression that the Viennese bus drivers must have fun when driving on this stretch in good weather conditions. 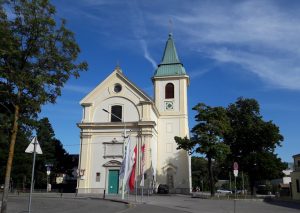 We get off the bus at the Kahlenberg stop, from where it continues on to Leopoldsberg. I’m always astounded that the many visitors to the hill remain barely noticeable. In fair weather, a beautiful view emerges as you take in the panoramic vista across the city of Vienna and even further beyond to the Schneeberg at the end of the Alps and the Leitha Mountains.

The Church on the Kahlenberg

The Roman Catholic church of St. Joseph on the Kahlenberg is a single-nave baroque church. It was founded as a monastery but this was destroyed in 1683 during the second Turkish siege. The church was consecrated in 1783 after its reconstruction, and was subsequently damaged by Napoleonic troops in 1809 before being consecrated once more in 1852. The church is ministered by Polish priests to this day in memory of Jan Sobieski. The church is particularly popular with Polish pilgrims, the most prominent of these probably being Pope John Paul in 1983.

The Stefanie Warte (Viewing Tower) and the Kahlenberg transmitter 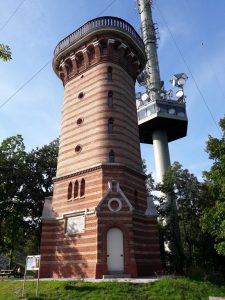 A five-minute walk over an occasionally steep, gravelly forest path leads us to a clearing. Located there is, on the one hand, a historical monument and, on the other, the Kahlenberg transmitter. These are two vastly differing structures historically, yet they lie very close to one another. You should see for yourself whether the contrast between them is too strong, or whether, like me, you find the positioning of the modern so close to the historical to be highly appealing and complementary.

The Stefanie Warte is a delightful historical building. The observation tower was built in 1887 by the Kahlenberg Rail Company and named after its benefactress, Crown Princess Stephanie, the wife of Crown Prince Rudolf. (This was something of a trend at the time. The Hotel Stefanie, Vienna’s oldest hotel, was also named after the Crown Princess at the time). The viewing tower is 22 meters high, and the viewing platform is reached by ascending more than 125 steps. 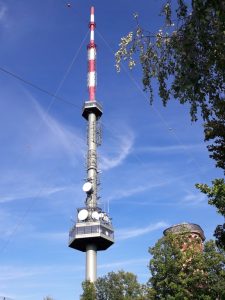 In 1956, a 129-meter lattice mast began broadcasting two radio stations and one television channel. Stereo radio and color television followed later. The current 165-meter tall mast first went into operation in 1974. In 1984, the main transmission control center for all of Austria, including a transmitter building, was relocated to the Kahlenberg transmitter, a guyed tube mast.

From here there are wonderful hiking trails which lead to Vienna’s backyard mountains, the “Kahlenberg” and the “Leopoldsberg”. Here you can read an autumnal hiking tip on that subject entitled “Walk all over”, the part of the Leopoldsberg that falls away steeply down to the Danube. From the Leopoldsberg you can easily reach the Kahlenberg by bus in order to head back in the direction of the city.

How to get there: Take the U4 underground line from all Schick Hotels to Heiligenstadt, then change to the 38A bus as described above. Alternatively, you can also take the number 38 tramline from the Schottentor U2 underground station until the Grinzing terminus before changing to the 38A going in the direction of Kahlenberg-Leopoldsberg.
Sources:
Wikipedia Sender Kahlenberg, Wikipedia, Kahlenberg, Wikipedia, Stefaniewarte
City chronical Vienna