Our Sights on the Moon

“Houston, Tranquility Base here. The eagle has landed.” These were the first words that a human being transmitted from the moon to the earth. And that was in July 1969. The fiftieth anniversary of the first moon landing was celebrated worldwide, and of course the Museum of Natural History in Vienna, as one of the world’s leading houses of its kind, also set its sights on the moon. The special exhibition “The Moon: Yearning, Art and Science” can be visited until June 1st, 2020.

My colleague at the reception in the Hotel Stefanie had the privilege of being invited to the exhibition opening on October 29th and he enjoyed it so much that he highly recommended I see it and described the opening evening to me: 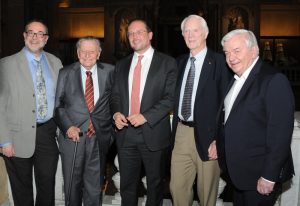 Christian Köberl, Director of the Museum of Natural History Vienna, skillfully guided the guests through the entertaining evening. He explained the considerations that led to the exhibition and made it so unique despite the many other exhibitions on the subject. Because as the title suggests, the topic is approached from many perspectives. In this context, he thanked the immediate neighbor, the Art History Museum, for the loans. In particular, he thanked the Director, Sabine Haag, before wishing her many long years in the position, a sentiment that was supported by extended applause.

Undoubtedly, Russell “Rusty” L. Schweickart was the evening’s most spectacular guest of honor. An astronaut from the Apollo program, who was on the Apollo 9 mission from March 3rd to the 13th March 1969. In his speech he made it clear that he, like the other astronauts, sees his achievement more as an achievement of humanity than that of the United States. He also went on to explain that the view of our planet from space also changes the perspective of things here on earth. He also shared some words about the exhibit: “I really want to emphasize that the exhibit itself is really exceptional… The best I’ve seen the entire year.”

In addition to the Ambassador of the USA, Trevor Traina, and the Minister Alexander Schallenberg, two Austrian legends also spoke: Peter Nidetzky and Hugo Portisch shared in their unique way their experience watching the broadcast of the moon landing for hours (the astronauts did not leave the lander until American prime time) and the visit to mission control. Portisch original sound: “We received a very friendly welcome there. Most of the people were Austrians and Germans anyway.”

After the ceremonial speeches, the visitors were able to experience the uniqueness of the exhibition up close and listen to the expert commentary provided by, among others, the physicist of the nation, Werner Gruber.

You are sure to be over the moon if you are interested in learning about our lunar neighbor from different perspectives or if you are interested in the moon landing itself. Different artists from the 18th to the 20th century are on display with pictures, photographs and films, installations and a virtual reality project for you to admire. Interactive stations, with the ability to smell and touch the moon and to pilot a moon rover, complete the extraordinary experience.

Interesting lectures will be held for the duration of the exhibition and on selected Wednesday evenings a special “moon dinner” will be served.