The Third Man Museum in Detail

Who, and above all where, is Harry Lime?

These questions have had generations guessing worldwide since 1949. A hot tip: More interesting clues and evidence can be found at Preßgasse 25 in the 4th district. 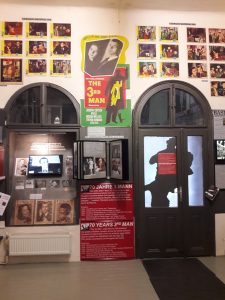 With much love and passion, Mr. Strassgschwandtner began collecting posters and premiere announcements for The Third Man in the early 90s. The collection now includes posters from more than 20 countries as well as other memorabilia such as autograph cards, press photos, newspaper articles, etc. More and more material were sent to him and his wife Mrs. Höfler, who has now also been bitten by the collection bug.

The great interest, especially from the English-speaking world, motivated the two to create this magnificent private museum. After countless hours of work and great personal and financial commitment without any public funding, they managed to create an outstanding museum that over the years has become a self-sustained success. The museum focuses on everything related to “The Third Man” film. Every piece of memorabilia imaginable and every bit of background information available is on display.

The Three Sections of the Third Man Museum

The first section focuses on memorabilia related to the stars, the director, producers and authors of the film, such as lobby cards, scripts and backstage photos.

The centerpiece of the exhibit is the second section, where you will find everything about the famous film music, Anton Karas and his zither. One of the highlights here is a still functioning cinema projector from 1936, much like the ones used to screen the movie when it was released. The projector actually plays a short exciting sequence from the film for visitors to enjoy.

The historical icing on the cake is the third section of the exhibit, which shows Vienna in the post-war period: A historical, striking and informative experience that takes an up-close look at the situation of the city and its inhabitants from 1945 to 1955. Many of the pictures will send shivers down your spine. I was particularly fascinated by the many pictures showing the destruction in Vienna at the time.

An air raid shelter has even been recreated as part of the exhibition. Standing there, I cannot help but imagine my father, who was 5 or 6 years old at the time, cowering in a corner of the air raid shelter with his mother and siblings and like so many other Viennese waiting for the end of the war with sirens blaring and bombs shaking the ground beneath them.

Slightly pensive, I leave the third section of the museum via the spiral staircase that leads to the museum shop. Mrs. Höfler is waiting for me there and asks about my first impressions and personal highlights from the Third Man Museum.
The two museum operators have truly more than succeeded in creating a space for visitors to intensively experience history. And they did it all without sponsors and subsidies. The number of interested visitors is proof that the Third Man Museum is a success.

My Highlights in the Museum

• Impressive, illustrated movie posters from various countries.
• The historical film projector, which was acquired through contacts of Mrs. Höfler’s father.
• The extensive soundtrack collection of the film music.
• The entire museum is outstanding, but the most exciting part for me was the historically lit third section.
• The shop offers many practical souvenirs.

Insights into the Third Man – Backstage

It is also interesting that there is an “American version” of the film that is a few minutes shorter and different, just to present America as not being too simple-minded, as is suggested in the original film.
Since some well-known local actors worked on the film, the crew had no problems actually shooting in real Viennese apartments. Every homeowner was proud to offer their apartment to a Viennese star as a filming location.

Orson Welles was a bit of an idiosyncratic world star and did not really want to film in the canal system of Vienna. He was persuaded, but was replaced by a stuntman in many scenes. In addition, a section of the canal system was faithfully recreated in a London studio as a further compromise. (In the movie, you can tell the scenes that are filmed in the Vienna canal system because Harry Lime’s breath is visible in the cold air, while in the scenes shot in the replica canal system you do not see his breath.)
Also impressive: A display of an original Vienna sewer grate. It proves that they also used some movie magic in the film. The grate was replaced with a cardboard replica, because otherwise it would have been too thick to see Orson Welles’ fingers reaching through.

Every Saturday from 2:00 p.m. to 6:00 p.m.
Guided tours by appointment. (German and English)
Night tours and concerts on the dates announced. You can also book a “Postwar Vienna” tour with Mr. Strassgschwandtner.

On a Saturday, after a wonderful breakfast in your hotel, take the subway to Karlsplatz, there you can explore the Vienna Secession and then, heading away from downtown, stroll through the Naschmarkt to the flea market, from there you can make your way to Preßgasse 25 to the Third Man Museum. After this exciting day, you have definitely earned some relaxation, for example in the Viennese Wiener Wirtschaft, just a stone’s throw away from Preßgasse.

Many thanks to the museum operators Mr. Strassgschwandtner and Mrs. Höfler for their outstanding and extremely friendly support.