Sightseeing with the Vienna Subway (U4)

Sights in Vienna along the U4 subway line

In Vienna, you can get around the entire city quickly, comfortably and in an environmentally friendly way using the very well-developed public transport system. So why not plan your vacation day along a single subway line? That will save you the time of switching subways and let you get more out of Vienna. Along the U4 subway line you will find a particularly popular statue, the most colorful waste incineration plant in the world and of course Palace Schönbrunn.

U4: The Green Subway Line from the Center of Vienna to the Countryside 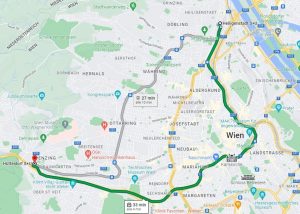 The U4 crosses the center of Vienna in a large arc from the north (Hartenstadt station) to the south-west (Hütteldorf station): 16.5 km in approximately 30 minutes. It was opened in 1976 and is the oldest subway line in Vienna. The well-preserved station buildings of the former “Wiener Stadtbahn” city rail system, designed by Otto Wagner, are sights in themselves.

U4 Heiligenstadt (End station in the north)

Here you start at the foot of the Kahlenberg and Leopoldsberg and also have good connections heading towards Grinzing, the area most famous in Vienna for its wine taverns.

Friedenreich Hundertwasser designed the Spittelau waste incineration plant in his own unique style. The striking golden tower is visible from afar. Indoor and outdoor tours are offered. Our rating: Worth seeing! 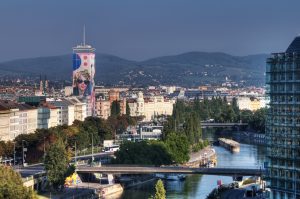 Take a walk along the Danube Canal or marvel at the current “wrapping” of the Ringturm.

Otto Wagner designed Art Nouveau buildings along the entire route of the U4 subway line. The Austrian Postal Savings Bank (built in 1906) is one of the most famous Art Nouveau buildings in Vienna and is only a few steps away. The historic ticket office is an architectural highlight and is open to the public. 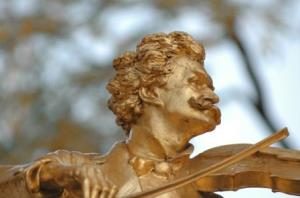 The direct route to the airport. This station is a junction where many commuter trains and subway lines come together. It also houses “The Mall” for a those who feel like a bit of shopping.

The gilded bronze statue of Johann Strauss in the Stadtpark is probably the most photographed statue in Vienna. It is definitely worth taking break from your sightseeing tour to enjoy a stroll through the park. 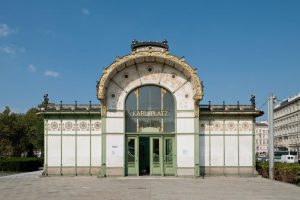 If you take the Kärntner Strasse exit, you will find yourself in front of the imposing Vienna State Opera House. But that is not all you will find at the largest underground station in Vienna! From this station you can also reach the Karlskirche, an impressive Baroque church, a branch of the Wien Museum, which is currently still being renovated, the Wiener Secession, which houses Gustav Klimt’s famous Beethoven Frieze, and the Otto Wagner Pavilion, a former station building of the Stadtbahn city rail system. Here you can delve deep into the life and works of Otto Wagner.

No visit to Vienna is complete without a stroll through the Naschmarkt to take in all the sights, sounds, smells and tastes of this very lively open market.

The Schönbrunn Palace, the Gloriette and the beautiful palace park are top attractions in Vienna.

The best way to directly reach the Schönbrunn Zoo.

Here you will find the Klimt Villa, the lovingly renovated last studio of Gustav Klimt. Open Wednesday through Sunday.

U4 Hütteldorf (End station in the south)

The former hunting grounds of the imperial family is a popular destination for the Viennese. Of the six different gates, the “Nikolaitor” is the easiest to reach. In order to reach the jewel of the Lainzer Tiergarten, the Hermesvilla, or “Palace of Dreams” as Empress Elisabeth called it, you have to plan for a longer walk. It is better to take the 56B bus from the Hietzing station or the 54B bus from the Ober St. Veit station.

The Schick Hotels Along the U4 Subway Line

You can easily reach the U4 from all Schick Hotels. The Hotel Capricorno is the closest, just a “hop and a skip” away from the Schwedenplatz station. Schwedenplatz is also ideal for Hotel Stefanie and Hotel City Central (5 minutes on foot).

From Hotel Am Parkring, you can take a leisurely stroll through the Stadtpark to the station of the same name, “Stadtpark” in just 7 minutes. From Hotel Erzherzog Rainer, the “Karlsplatz” station is just a 10-minute walk away.