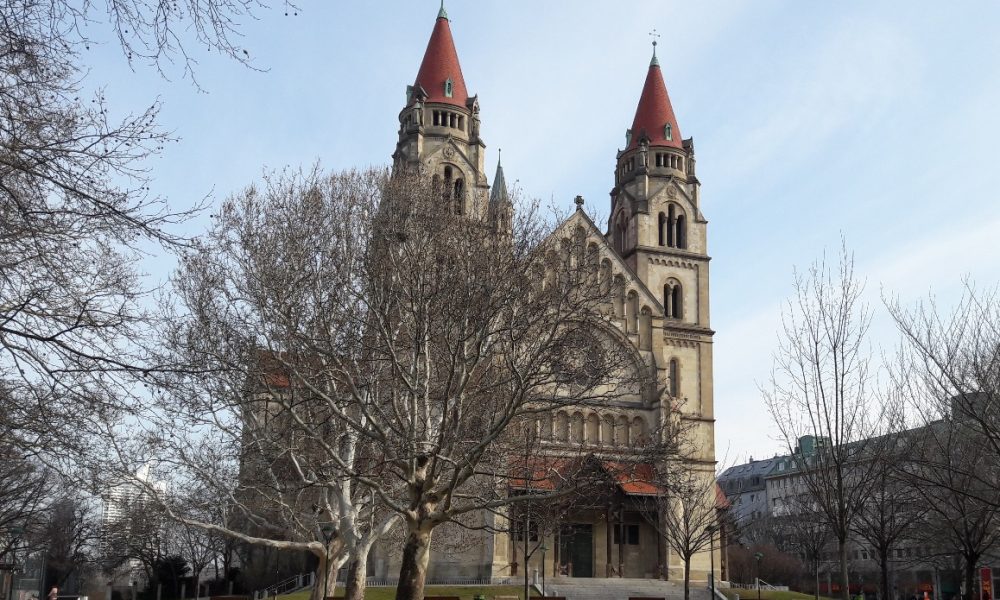 The Emperor’s Jubilee Church on the Danube

When I travel on the Vienna U1 underground line in the direction of Leopoldau, my eye is always caught by the striking, proud church building to the right just before we cross the Danube. My curiosity was piqued, and I decided to delve a little deeper into the church’s history. The monumental, Neo-Romanesque church was constructed between 1898 and 1913 to commemorate the 50th anniversary of Kaiser Franz Josef’s reign, the structure having been modelled on several churches located on the Rhine. For that reason, the St. Francis of Assisi Church is also referred to as the Jubilee Church.

The area that surrounds the church today used to be alluvial land up until the Danube’s first regulation around 1870, and there were often floods. The recovered land was gradually settled and the need for a church (parish) arose. 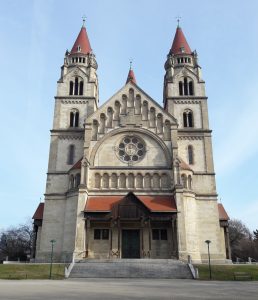 It is interesting that the parish was called “The Parish of Donaustadt”, a name which it retains to this day, since the new land was entitled “Donaustadt” (Danube City). The present-day 22nd Viennese district of “Donaustadt” was only given this name in 1954.

The area was quickly built up until 1910, but belonged as a parish to the more distant parish of Praterstraße. The 50th anniversary of Kaiser Franz Josef’s reign in combination with the need for a church building in the vicinity of today’s Mexikoplatz was taken as grounds to construct this exceptionally beautiful church.

Where did the money for the construction of the church come from?

A committee which had been set up on Saint Joseph’s Day on 19 March 1898 called on all persons under the monarchy to donate towards a new parish and garrison church which was to be dedicated to the Kaiser’s namesake, Francis of Assisi.

Unfortunately, few donations were made and subsidies from the religious fund and the City of Vienna were also cut. The planned designs were systematically simplified and its construction was repeatedly delayed as well. Today’s church building must essentially be seen as “incomplete”. The wooden porches, for example, were built in 1913 as a temporary measure.

In 1898, management of the church’s construction was assigned to Viktor Luntz. His death in 1903 caused further delays to the building work. August Kirstein took over the continuation of this large-scale project thereafter, and held strictly to Luntz’s plans. 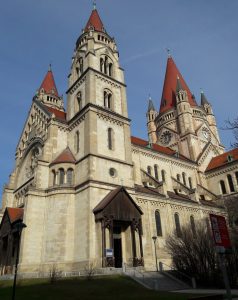 In the meantime, Princess Elisabeth was assassinated in Geneva, and as a result another memorial chapel was built.

The ceremonial laying of the foundation stone

I was excited to discover that the laying of the foundation stone took place with the Kaiser present on 10 June 1900, Trinity Sunday. An unbelievable 100,000 people were in attendance to experience something verging on the spectacular. You have to remember that Vienna didn’t have nearly as many inhabitants at that time, meaning that a very large proportion of the city’s populace was there, as well as many prominent figures and diplomats. Children numbering 30,000 lined the streets from the Hofburg to the Aspernbrücke (Aspern Bridge).

The consecration of the church was not possible at this time as the interior was not yet finished. Its completion was further delayed, that is to say, ended because of the First World War, and many basic requirements were only put in years later. 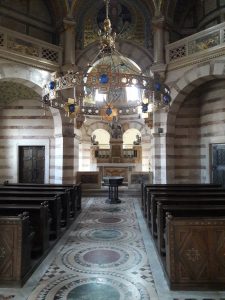 The Elisabethkapelle had already been completed by 1908 and was consecrated on 10 June. The Austrian Red Cross funded the chapel built in memory of its first patroness by way of donations and its own funds. More was collected than was actually required, something which accounts for its magnificent features.

The Red Cross allowed church services to take place in the Elisabethkapelle from 1910 onwards, whereby the congregation had to stand in a side aisle in front of the chapel. The pastoring was first taken on by the Salvatorians of Kaisermühlen and subsequently the Trinitarians of Gersthof. In 1921, it was possible to establish an independent parish church, which is still administered by the Trinitarians today.

The Church’s location and decor

The eye-catching stone structure built in the style of the Rhenish churches lies picturesquely on a dreamy, fascinating location just before the beginning of the Reichsbrücke (Empire Bridge). A large, striking tower and two bell towers lend this building an almost magical appearance.

There are art nouveau angels with palm leaves in gold mosaic on the ceiling, a large art nouveau chandelier, a distinctive organ and a Sacred Heart of Jesus statue. The Neo-Romanesque high altar with a baldachin from the monastery church of Seckau was installed in 1964. There are also modern paintings by living artists in the Jubilee Church.

There are several points of interest for those interested in art and architecture. The interior of the Jubilee Church does not stand out particularly itself, though the high altar is very much worth seeing. The shuttered Elisabeth Chapel, for that reason, is all the more worth seeing, but is closed to the public unfortunately.

Getting there and good camera angles

From the Schick Hotels, take the underground line U1 in the direction of Leopoldau to the “Vorgartenstraße” station. Once you have alighted, take the exit closest to the front of the train and keep straight after leaving the station. The marvelous church is set almost romantically to the right of the ramp leading onto the Reichsbrücke, surrounded as it is by trees in the middle of a lovely park on Mexikoplatz.

If you cross over Handelskai at the lights or use the footpath ramp on the Reichsbrücke, you are afforded an excellent view of the church for photographs on the elevation formed by the structure of the bridge.

If you wish to combine your visit to the church with a boat cruise, the landing stage for the boats is located close by. Our reception teams in the Schick Hotels will be more than happy to advise you about this. It is also worth visiting the Donauinsel (Danube Island), which was built in the 1970s as part of flood control measures and which now constitutes Vienna’s primary recreation area.

The visitor center at the UNO City awaits you one underground station further along with many interesting facts about modern-day Vienna. Furthermore, the area around the “old” Danube is worth a look, and Vienna’s largest shopping center, the “Donauzentrum” (Danube Center), is located immediately adjacent to the Kagran underground station.